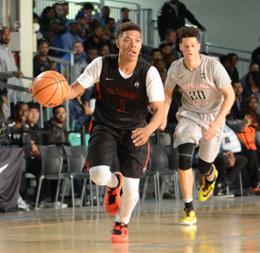 Quade Green (above) and the PSA Cardinals are one of the favorites for the 2016 Peach Jam title. (Photo: Josh Verlin/CoBL)

July is here, and Wednesday brings with it the first of three live recruiting periods, five-day stretches that allow Division I coaches to watch and evaluate potential high school recruits. It’s a crazy 15 days with only brief periods of respite between them, with coaches, players and scouts flying and driving all over the country to potentially dozens of events to watch hundreds of games.

Here’s a list of many of the events either in the area or with a good sampling of area programs:

First Live Period (July 6-10)
Adidas Gauntlet Finale
When: July 6-9
Where: Upward Star Center; Spartanburg, S.C.
Who: The best travel teams from the spring’s Adidas Gauntlet circuit as well as several regional qualifiers all head down to South Carolina for the circuit’s championships. Philly’s own K-Low Elite, the re-branded Team Philly, is one of the 41 teams that were selected for the event, and the only program from Pennsylvania; The Firm (N.J.) is the only other from the tri-state area.

Elevate Hoops Summer Icebreaker
When: July 6-8
Where: Philadelphia University; Philadelphia, Pa.
Who: A few Under Armour teams from the Northeast will compete in Philly a week before they head to Atlanta for the UAA Finals, including We R1, Philly Pride and Sports U. The event will feature a heavy local flavor as area programs Team Philly, Jersey Shore Warriors, Team Final Black and York Ballers will be taking part as well.

Elevate Hoops Summer Showdown
When: July 9-10
Where: Philadelphia University; Philadelphia, Pa.
Who: Many of the same teams from Icebreaker will continue playing at Philly U on the weekend, and will be joined by additional Northeast programs.

Global Squad International Showcase
When: July 6-8
Where: Hill School; Pottstown, Pa.
Who: Run by John Alexander, the Global Squad program has brought teams from around the globe into the US for a summer of AAU basketball, with numerous players from its teams winding up on American college rosters. This event, now a few years old, pits several of the Global Squad’s teams against those from prep schools like Hill and Peddie over three nights of competition. Plenty of Division I coaches will be in attendance, especially those from the Ivy and Patriot Leagues and other high-academic institutions.

Hoop Group Elite Session 1
When: July 6-8
Where: Albright College; Reading, Pa.
Who: Hundreds upon hundreds (approx. 800) campers will descend upon Reading for the first of three big Hoop Group camps this summer, with a mix of rising freshmen through rising seniors and all sorts of talent levels taking the court. The Hoop Group Elite camps always draw a few future high-major prospects and plenty of great mid-major as well as small-college talent to Albright, and this should be no exception.

Hoop Group Elite Team Camp
When: July 9-10
Where: Albright College; Reading, Pa.
Who: Some of the best high school teams not just from the Mid-Atlantic Region but across the entire country. Roman Catholic will make its debut under new head coach Matt Griffin, while the Hun School (N.J.) and Hill School (Pa.) are also in the field.

Nike EYBL Peach Jam
When: July 6-11
Where: Riverview Activities Center; North Augusta, S.C.
Who: The top 24 teams in Nike’s Elite Youth Basketball League -- as well as some of the best teams in the 16U division -- compete for the the championships of the EYBL in what’s certainly one of the standout events of the entire summer. The first three days are all pool play, with each team in attendance guaranteed six games in front of the literally hundreds of high-major coaches that stream through Riverview, and then the bracket play begins to determine the EYBL champion. The final, which will be broadcast on ESPN-U, is sure to be a tough ticket. 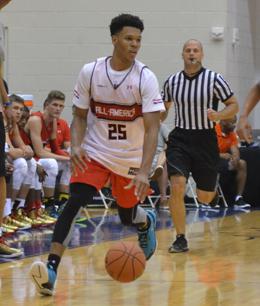 Trevon Duval (above), the top guard in the 2017 class, will be back at the Under Armour All-America camp. (Photo: Josh Verlin/CoBL)

Under Armour All-America Camp
When: July 6-8
Where: Queens University, Charlotte
Who: The best of the best on the Under Armour Circuit hit the two courts at Queens University for three days of drills and games. Some of the top local talent will include WeR1’s Trevon Duval (2017/API), Bourama Sidibe (2017/St. Benedict’s) and Eric Ayala (2018/Putnam Science), Philly Pride’s David Beatty (2017/St. Benedict’s) and Donta Scott (2019/Imhotep Charter) plus Seton Hall commit Myles Cale (2017/St. Patrick’s) of the South Jersey Jazz.

Second Live Period (July 13-17)
Hoop Group Elite Session 2
When: July 13-15
Where: Albright College; Reading, Pa.
Who: Similar to the first Elite camp of the offseason, hundreds of high schoolers will again go to Albright College, though this is usually a very different group from the first week. With the Nike EYBL circuit over, quite a few of those team’s players will come up to Reading, as well as some Under Armour players whose teams aren’t at the championships. Typically, this is the best Hoop Group camp of the summer, but all three live period events are more than worth the visit. 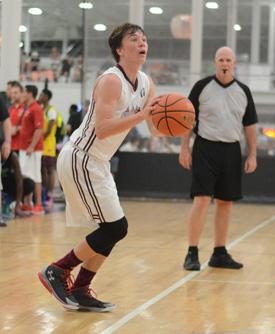 Hoop Group Summer Jam Fest
When: July 15-17
Where: Spooky Nook Sports; Manheim, Pa.
Who: Teams from up-and-down the East Coast will converge in the sprawling facility near Lancaster, Pa. Most of those taking part are non-sneaker teams -- though some, like Team Philly, NJ Playaz and the NY Lightning are. Once again featured will be non-affiliated in locals Jersey Shore Warriors, South Jersey Jazz and the York Ballers.

Summer Takeover Invitational
When: July 15-17
Where: New 24 Basketball; District Heights, Md.
Who: Hosted by DMV-based and Nike-backed Team Takeover, this invite-only tournament will feature select EYBL teams from the East Coast. Last year’s version featured EYBL programs Team Final and Boo Williams (Va.), among others; Final is slated to be back in this year’s field as well.

Under Armour Association Finals
When: July 13-16
Where: LakePoint Sports; Emerson, Ga.
Who: The best teams in the Under Armour Association head down to Georgia for the championships of the sneaker company’s summer circuit. WeR1’s 17s and 15s are both in their respective fields, with Philly Pride’s 17s there as well from the local programs. Sports U (N.J.), D.C. Blue Devils, Uncommon Bulls (Va.) and other regional programs all have players being recruited by City 6 schools as well. There are 48 programs in the 17U division alone, so while the UAA championships might not have quite the same prestige level as the Peach Jam just yet, it’s got an advantage in terms of sheer numbers.

Victor Oladipo Skills Academy
When: July 13-15
Where: DeMatha Catholic; Hyattsville, Md.
Who: Select players from the Nike EYBL compete in this all-star camp which features a mix of skills development and game action. Tends to draw 3-4 players from a variety of teams across the EYBL, including a good mix of some of the better young prospects on the circuit. Has served as a springboard for a good number of mid-to-high-major prospects over the last few years.

Las Vegas Fab 48
When: July 21-24
Where: Bishop Gorman HS; Las Vegas, Nev.
Who: One of several big events in Vegas during the live period, the Fab 48 draws teams from various sneaker backgrounds (and some non-affiliated programs) from around the country.

Live in A.C.
When: July 20-22
Where: Stockton College; Galloway, N.J.
Who: Many of the area’s top programs use this as the final “big” event of the summer, getting a chance to spend a few days down by the shore in Stockton’s big warehouse of a gym, with four courts in the main facility and a few other high schools chipping in. The Wednesday night showcase games are always well-attended, and there’s often teams featuring players who are switching things up on the AAU circuit with one more week left to show out in front of the coaches in attendance.