Here’s a notebook from the opening night of Temple’s Team Camp, which began Friday:
~~~ 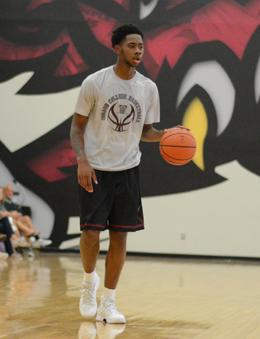 Mikeal Jones, a 6-foot-7 forward who looked ready to emerge as a sophomore big man for Roman Catholic next season, instead made the decision this week to transfer to Girard College and repeat his freshman season, reclassifying into the class of 2020

“I wanted a growth year, I feel like all the best players in the country, all the top players, most of the people in the league they had a growth year,” he said. “

At the moment, Girard College is a member of the PIAA, which means that Jones still only has three years left to play at the school; however, rumors have been heavily swirling that the school is eyeing leaving the organization and going independent, which would allow Jones to play out his final year of eligibility there in 2019-20.

If that doesn’t happen, look for him to go to prep school instead of graduating on his original course.

At the moment, Girard College is still looking for its new head coach; whoever gets the job will have a roster featuring mostly underclassman, including the talented Jones and 6-6 wing Brandon Smith, giving the program two potential Division I athletes to build around.

For building a high-level basketball program is clearly in the school’s plans, having brought on former Drexel assistant Bobby Jordan to run the school’s athletics and now getting a talented forward like Jones to build around in its re-formative years. It’s a team that’s had success before, most recently with John Johnson leading the way to a state title in 2009, but not that’s been sustained.

Jones is looking to put Girard on the map, permanently.

“A lot of people said that if I build this--not by myself, but if I built it to become a powerhouse, that’ll be legendary, I’ll make a name for myself in the city,” he said. “Just want to bring a school that nobody knows in the city, nobody respects, I wanted to bring them out of the shadows and put them on the big stage.”

Del-Val boosts frontcourt with pair of new bigs
Del-Val Charter made a name for itself last season, winning both the Public League and the Class AAA City Championship.

The Warriors are hoping to keep that momentum rolling, but they’ll have some holes to fill next season, especially in the post. The good news for Del-Val is the team added two forwards, senior Maqi Watson and sophomore Amin Dandrige, who were both playing with the program Friday night.

Watson and Dandrige will help soften the blow of big men Wade and Waheem Lowman graduating.

“They give us some length and athleticism down low, and that’s what we need,” Del-Val coach Jason Harrigan said. “It’s a post presence that is nice to have and know we have a few guys that can protect the rim and grab rebounds.”

Watson and Dandrige were both a big help as Del-Val topped Plymouth-Whitemarsh in the team’s first game of the camp. The two forwards made it tough for P-W to finish at the rim and were each the beneficiaries of some nice feeds as well as putbacks on the offensive end.

The Warriors also lost guard Semaj Motley, but they will return two key scorers in Antwuan Butler and Makhi Morris, who were both knocking down jumpers and pushing Del-Val out in transition on Friday.

With Butler and Morris back, the Warriors certainly have a shot to defend their titles – and the additions in the post won’t hurt either.

“In the Pub, you have to work your way up, and I feel that’s what we did,” Harrigan said. “And you keep going and jump divisions and hopefully you work your way to a championship after you challenge and breakthrough. But now that we had the taste of winning, I’m hoping that continues to drive us.” 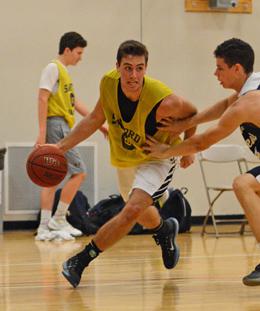 Connor Rufo (above) and Sanford School are moving on without one of the school's most prolifict scorers in Mikey Dixon. (Photo: Josh Verlin/CoBL)

Sanford School moves into post-Dixon era
Entering his 25th season as Sanford School (Del.) head coach, Stan Waterman is facing one of his toughest challenges yet.

After losing the school’s second all-time leading scorer, Mikey Dixon, to Quinnipiac, Waterman will be engaged in a major rebuilding effort this offseason.

“It is weird without Mikey,” Waterman said. “With Mikey of course when all else failed, we could put the ball in his hands and get us a bucket...but now, we are going to have to manufacture some points and create some offense. I think J’yare Davis will do a nice job when he’s here with us.”

If there is an heir apparent to Dixon it’s Davis, one of the top freshmen not just in the First State but in the entire region.

Standing at 6-5, the upcoming freshman Davis will have the ball in his hands a lot to help lead this team. But, Davis will not be able to do it alone and Waterman feels that there are other viable options on the team.

“I think J’yare will be our primary scorer next year, there’s no doubt about that,” Waterman said. “Marcus McCollum can score, put the ball on the floor, and get to the basket. Our big young guys, Ryan McKeon and Devin Harris have improved and they are going to help us. Corey Perkins is doing a nice job at the point for us.”

Connor Rufo is another player that will be a key part to Sanford’s season. The upcoming senior did it all on the court tonight, something that Waterman loves about his game.

In a close loss to the NY Rens, Rufo did quite a bit with the ball in his hands, played great on-ball defense, and facilitated well to his teammates. Rufo will be looked on to play a vital role for his team going forward.

“Connor was a starter for us last year. He’s solid, he’s smart, he’s tough. He does a little bit of everything for us, he bangs, he rebounds, he can shoot the ball. We will rely on him quite a bit this year as well,” Waterman said.

After going 21-2 last season, Waterman expects this season to be a different story as Dixon is going to be a tough player to replace. Waterman was not hesitant to admit that next season is going to be a rebuilding season, but Waterman is excited for what is to come.

“I’m excited, you know that’s what keeps it fresh when you kind of have to start over again and find your status and identity,” Waterman said. 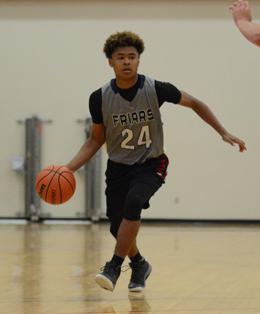 Kieves "Duece" Turner is one of a handul of impressive Malvern Prep youngsters. (Photo: Josh Verlin/CoBL)

Malvern Prep youngsters impress
A good portion of the current Malvern Prep roster is made up of multi-sport athletes whose futures are in other sports.

And while head coach John Harmatuk certainly isn’t bemoaning his players’ talents in other sports, it leaves his group rather unrehearsed for events such as the Temple team camp.

“We’ve had some open gyms but the older kids, two are baseball players and two are lacrosse players, so I haven’t seen much of them,” he said. “We don’t have an inbounds play in, we don’t have defensive terminology.”

What gives Harmatuk great reason for optimism is that he can see the change on the horizon. Friday night was the debut of the Friars’ incoming freshman class, and it’s a great that holds great promise for the Inter-Ac program’s future.

A group of guards -- Rahdir Hicks, Kieves “Deuce” Turner, Isaac White and Spencer Cochran -- all saw plenty of playing time for Malvern Prep in a loss to Cherokee, a tightly-fought contest that only saw the outcome decided in the final minute or two.

“They’ve been at all of our open gyms and I could tell right away (they were talented),” Harmatuk said. “This is a group I’ve been watching for the last three years. They have the talent to play big minutes, if they buy in and play defense, they could play as freshmen, for sure.”

And unlike quite a few of their teammates, they’re basketball players first and foremost.

Harmatuk, going into his fourth year as head coach at Malvern Prep after arriving in the area from Houston, has slowly brought the program back from the bottom of the Inter-Ac, though he’s yet to have a group ready to take the next step and win the whole league.

These freshmen could ultimately be the class that helps get it done.

“I’ve been pleased with the progress,” he said. “We’re ahead of schedule. I thought it would take five years. And this is year four. Getting the kids in the program, changing styles, buying in, but it’s happened fast. And they’re good kids, that’s a big part of it.” 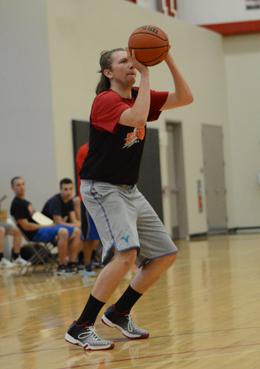 Cherry Hill East's Joey DiAntonio had his outside shot working for him on Friday night. (Photo: Josh Verlin/CoBL)

Quick Hits
-- Cherry Hill East (N.J.)’s Joey DiAntonio had his perimeter shot working for him tonight. The 6-foot-5 wing forward, a rising senior for the Cougars, proved during his junior season that he’s one of the best long-range threats in South Jersey, and showed why against the outmatched Braves with no fewer than five triples in the win. Despite his size and shooting ability, DiAntonio said he hadn’t yet been hearing from any colleges; expect plenty of Division III schools to catch on over the rest of the summer and his senior year if those shots continue to drop.

-- Shipley School has a noticeable boost in size thanks to the addition of Ray Somerville, who transferred from Penncrest. The Temple camp was the first time the 6-9 Somerville was playing with his new teammates, and he has re-classfied to a 2019 recruit with the move. Somerville comes with plenty of upside and has only been playing basketball for two years. He blocked a handful of shots and grabbed rebounds as Shipley’s comeback attempt against Strath Haven fell short on Friday. And while his offense will need time to improve, Somerville has the look of a player who could turn into a formidable post presence.

-- Oak Park (Michigan) made the trip to North Broad Street and provided the most entertaining ending to a game on Friday. Oak Park’s Bobby Thompson nailed a game-winning 3-pointer as time expired in overtime to give his team a win over Haverford.

-- Baltimore Poly (Md.)’s De’Vondre Perry (2017) did a little bit of everything tonight. The 6-6 forward was scoring at all three levels at will and Hampton Roads Academy (Va.) had no answer for him. Perry played the role of facilitator and was their go-to scorer on the offensive end when counted on. Perry also was active on the defensive end, blocking shots on his opponent trying to drive to the rim on him. Perry is a sought after recruit who currently holds 14 offers, including offers from USC, Temple, George Mason, UCF, Seton Hall, Rhode Island, and St. Bonaventure. If Perry continues his stellar play, expect the number of offers to keep climbing in the coming months.