Here’s a notebook from the second day of the St. Joe’s Commuter Team Camp, featuring action from Saturday’s morning sets: 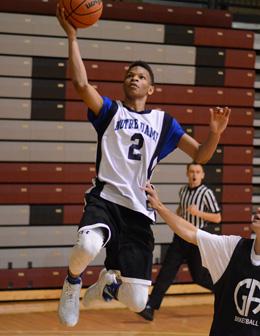 Notre Dame’s Wong shines, earns first offer
As soon as Isaiah Wong stepped off the court Saturday, he walked into the biggest conversation of his basketball career thus far.

Saint Joseph's University head coach Phil Martelli had seen enough of the rising sophomore in a win over Germantown Academy to give him his first scholarship offer.

"My coach said to him I was a humble man," Wong said. "(Martelli) thought I played well today, and he thought I was a good player."

It will likely be the first of many for the soft-spoken and talented Notre Dame guard.

A 6-foot-1 combo guard, Wong is a terrific scorer, ball-handler and distrubitor with the ability to score from all three levels. While playing up with the WeR1 16U squad this summer on the Under Armour circuit he's averaging a team-high 13.8 ppg.

“Isaiah’s a tremendous kid,” Notre Dame assistant coach Rahsaan Thompson said. “This is a kid that just works as hard as he can.”

Last year, the Irish went 27-3 and lost in the state semifinals. They hope to capture states this year, even though they graduated six seniors this past spring.

In fact, the only current senior on the team for next season is Manny Stokes-Dixon, who will have the daunting task of leading a very young team with high expectations.

"Manny's a tremendous kid," Thompson said, "he's a kid that came in that was a baby as a freshman like Isaiah and he impacted us from the very beginning."

Stokes-Dixon will join Wong in the backcourt and provide the team with a veteran presence that will help the Irish reach their lofty goal.

“I’m confident with Manny’s leadership that he can help these kids along the way,” Thompson said. “We’re gonna rely on his leadership a lot this year so I trust that he will lead us down the path to victory.”

No matter what, Notre Dame will try to wear down opponents with the press and moving the ball on the break.

Wong and Stokes-Dixon will act as the spark-plugs for that.

“We try to get up and down, we try to get people tired with our tempo, so we press a lot in transition,” Thompson said. “We’re like a baby Golden State Warriors.”

"That's the crème de la crème of who we are," he added.

Methacton trying to bounce back after down season
All weekend long, Methacton was followed closely by one of the St. Joe’s assistants, and for good reason.

David Duda Jr., whose father -- Dave Duda Sr. -- has been on the SJU staff for the last 10 years, is a rising sophomore on the Warriors. A 6-1 guard, the younger Duda is a sharpshooting lefty with a basketball IQ befitting the son of a Division I coach.

“He’s a really really good shooter, and has a good feel for the game,” head coach Jeff Derstine said. “He’s been working hard, he’s obviously around the game all the time. He’s in the weight room, doing all the right things to get better.”

Duda isn’t the only young player of note on Methacton’s squad.

Incoming freshman Jeff Woodward impressed with his strong 6-7 frame, and has the potential to become one of the top post players in the area with continued progression based on size and athleticism alone. Those two, plus a group of now-experienced upperclassman, should pave the way for some redemption this year.

Last season was certainly one to forget for the the Warriors, who usually finish at or near the top of the Pioneer Athletic Conference’s Liberty Division standings, as they’d done with a 25-win season in 2014-15. But the loss of a big senior class paved the way to a rough 2015-16 that saw them drop to fourth in the five-team division and miss out on the league playoffs.

Derstine had a hint that better things were in store for the years ahead, though, as his team picked up four of its six total wins in the last two weeks of the season, including a 39-36 home victory over eventual league runner-up Perkiomen Valley.

Rising seniors Crandall Jones and Liam Malachowski as well as rising junior Noah Kitaw all had turns in the starting lineup at points last year, while Andrew Pisano and Patrick O’Neill -- both seniors -- also got varsity experience.

“These guys, last year, really stayed positive and we made some strides towards the end of the year, got some big wins,” Derstine said. “I think they’ve taken some positives from the end of the season and building on them all spring.”

Martin ready to lead for Conestoga
Conestoga has been playing in a lot of team events in June, and that’s good news for rising senior Charlie Martin.

For one, Martin can work on his game and a 3-pointer that he was consistently hitting at St. Joe’s. But it also is giving him a taste of what it’s going to be like as a senior next season after the Pioneers graduated three starters.

“This is our third team event in three weeks, so we’re playing a lot together and it’s showing me what it’s going to be like being a senior and a leader,” Martin said. “It’s a lot of showing the younger guys what it’s like and keeping their heads up if something doesn’t go right.”

Conestoga is coming off an 18-12 campaign, and the only other returning starter joining Martin is Angus Mayock, who was unable to attend the camp on Saturday. Lost to graduation are three-year starting point guard Daryl Caldwell (West Chester), fellow guard M.J. Lezanic (Susquehanna) and wing Andrew Larkin, all key pieces from a year ago, as well as big man Jack Baker.

So as the most experienced player in a Conestoga uniform, Martin embraced the role Saturday. He was consistently chatting with coaches on the sidelines, called out plays and kept an interest with what younger players were doing late in a lopsided win over Tatnall (Del.).

“I just want to be physically and mentally ready for my senior season,” Martin said. “I know there’s going to be more on my plate and I’m going to have to step my game up.”

As for his own recruiting, Martin is hoping to play at the next level in at a D-II or D-III program. He’s heard so far from Arcadia among a few other schools and is hoping to grab more offers throughout the summer and his senior year. 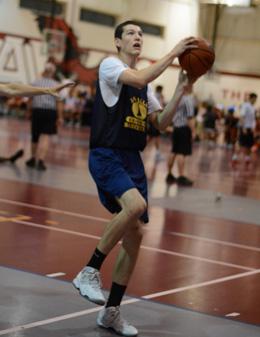 Yes, the Explorers have a pair of young big men, Zach Crisler (6-7) and Konrad Kiszka (6-5) who could make big imprints on the Catholic League for three seasons. Both played well on Saturday morning as the Explorers climbed out of a 12-0 deficit to beat Notre Dame in the early set of games at St. Joe’s camp.

“The key for both of them is for them to let us continue to coach them,” La Salle coach Joe Dempsey said. “They’re getting a lot of attention and people are asking about them a lot, they have a lot of interest and that’s going to continue. They’ve both been great about it, and they’re hard workers. So they need to understand they’re not anywhere near a finished product yet.”

Both Crisler and Kiszka played sparingly as freshmen, though the duo evenly split 20 points in a late-season win over Bishop McDevitt. With Ryan McTamney and Shane Stark graduating and going to Ursinus, the now-sophomore pair will get a lot more minutes in 2016-17.

They were often on the court together at St. Joe’s camp. Kiszka – who plays more on the wing – demonstrated his ability to score off the dribble and his 3-point range. Meanwhile, Crisler put some post moves and his smooth footwork on display in the victory.

Both will be coveted on the recruiting trail, and Kiszka -- who plays alongside high-major targets Bryan Antoine and Scottie Lewis on a stacked Team Rio squad on the Under Armour 16U circuit -- already has an offer from Niagara.

Both players still lack the muscle seen from some top-level PCL upperclassmen. But the talent level and height are both there.

“They both have the ability to go inside and step out and shoot, and they play well together,” Dempsey said. “We’ll see how quickly they can adjust. They’re going to have to add some weight, and they both just turned 15 years old, so there’s a lot of potential.”

Quick Hits
--Bergen Catholic – the alma mater of St. Joe’s forward Pierfrancesco “Cecco” Oliva – was on hand at Hawk Hill this weekend. With the team was 2017 guard Taj Benning, who has drawn interest from a handful of Division-I schools. Benning has offers from Howard, NJIT, VCU, Saint Peter’s, Rider and Boston and hopes to start making some official visits soon. The 6-foot-3 guard who finds multiple ways to score also has interest from La Salle and has taken an unofficial visit to the Philadelphia campus.

--At Haverford School, it looks like rising juniors Nasir Smith and Bobby Stratts could both be part of the Fords game plan next season. Smith, a lanky guard, was one of the team’s best scorers through the first two days of camp. Stratts, meanwhile, has grown a bit since last season and gives Haverford a large post presence on both ends. They should help take pressure off rising juniors Kharon Randolph and Joe Dignzaio, both starters from a year ago, plus sophomore big man Asim Richards.

--With a good part of the Catholic League (Roman, Carroll, Ryan and others) dealing with quite a bit of roster turnover due to graduation, this could be the year for Bonner to make a sizeable jump up the standings. With 2018 F/C Ajiri Johnson back in the mold, the Friars have certainly looked the part over the last few weeks, and have been dominating teams at St. Joe’s this weekend. Having Johnson, a 6-8 post, in the middle frees up a ton of space for Bonner’s guards; rising seniors Christian Lane and Dylan Higgins have had a solid weekend, as has rising sophomore Michael Perretta.