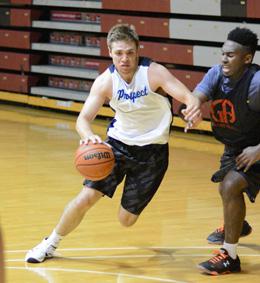 Here’s a notebook from the opening night of the Saint Joseph’s Commuter Team Camp, which began Friday:

Prospect High School makes long commute to Philadelphia
As would be expected by the name, most of the teams at the St. Joe’s Commuter Team Camp travel to and from the City Avenue campus for each of the three days of competition.

So when Phil Martelli and his staff got an email from Prospect HS (Ill.) head coach John Camardella inquiring about the camp, they were certainly a little surprised. But it was no joke -- the Knights were interested in coming to Philly, with sponsors back home helping them afford the necessary expenses.

“We travel every year, we pick a different spot and we let our seniors choose,” said Camardella, who’s been the program’s head coach since 2007. “We threw a bunch out that had weekends, told them about Coach Martelli and the system that he runs here, and they voted and they all wanted to come here.

“I’ve been (to Philadelphia) numerous times, myself and my assistant, we’re both history teachers back in Chicago,” he added. “So we’ve been here for the historical side but never for basketball. But we’ve been watching Coach Martelli and St. Joe’s going back to the Jameer Nelson days.”

Over the last few years, Camardella and the Knights have been to an impressive list of schools: Georgia Tech last year, Kansas before that; Ohio State, Michigan State, Purdue and Illinois have also had appearances.

And so on Friday night they made their debut in the City of Brotherly Love, beating two very good programs in Germantown Academy and La Salle HS.

Last year, Prospect made it to the Class 4A Regional Championship game before losing to Fremd. And with all five starters back -- including four seniors -- expectations are indeed high around the Knights’ program.

Several players in particular stood out over the course of their two games.

In the middle, 6-foot-7 forward Matt Szuba proved to be a mobile and talented post scorer and defender, while 6-4 wing guard Frankie Mack knocked down perimeter shots and hit tough layups to boot. Point guard David Swedura, the team’s only starting sophomore a year ago, played the role of distributor and 3-point gunner equally well.

“(Frankie’s) got a great game…(he) and Matt have been starting for us since sophomore year,” Camardella said. “It’s now a very experienced group that I think can make a run in our area.” 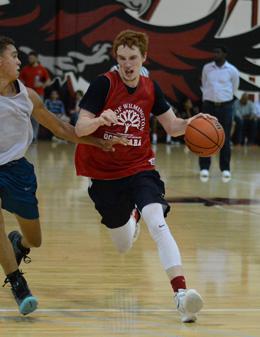 Octorara’s Ray has busy first contact week
Christian Ray had been looking forward to June 15 for a while.

The 2018 Octorara prospect knew that Wednesday meant he could start being contacted by schools, and the D-I interest for Ray was evident. In just a few days, he’s already heard from Drexel, Colgate and Lafayette – making the wait for June 15 worth it.

“It feels a lot different,” Ray said of the continual contact from schools. “It’s way different, and it’s something I was looking forward to for so long. You know that date on the calendar, June 15, and now that it’s here, the whole process feels so much more real.”

Ray displayed why he’s a D-I prospect at Saint Joseph’s team camp on Friday night, knocking down jumpers and hauling in rebounds as Octorara topped Lower Moreland. Ray, 6-foot-4, projects as a shooting guard at the next level, but he uses his size to his advantage whenever possible.

Playing with Octarara – which is coming off a 20-win season -- in team events and Team Philly on the AAU scene, Ray is hoping to improve his all-around game this summer.

“I want to take the next steps and up my game to the next level,” Ray said.

In addition to Ray standing out in the win over Lower Moreland, Octorara got significant contributions from both forward William Joseph and guard Gary Groves. Both Joseph and Groves are rising seniors and figure to be part of Braves’ rotation next season.

Lower Moreland coach optimistic for next year
Seth Baron has a lot of work to do.

But as the coach of a team that lost five of its eight best players to graduation, he is quite excited about his squad’s prospects in the coming year.

“i don't like to say that we’re rebuilding, because we have talent,” he said.

This year, the Lions will be short of two exceptional guards. Both three-time Bicentennial league Player of the Year Danny Duffey (Gettysburg) and Tyler Millan (Kings College) graduated this spring and will continue their careers at the Division III level.

But Baron is far from hitting the panic button.

“We're going to set our goals appropriately, but we expect to compete every game,” he said. “We’ll see what happens as this team gels.”

The two returning seniors from last year will help to ease the transition.

“(Cobe Wiggins and Nick Smolda are) two productive starters,” Baron said. “They have the skills to carry the team in multiple ways.”

Smolda is a very proficient shooter from behind the arc. Wiggins, standing at 6-foot-3, is one of the tallest players on Lower Moreland.

“We’re always the smaller team,” Baron said. “Must be something in the water.”

Although Lower Moreland has never been a big team, they made up for it in the past by pushing the ball in transition and being physical on defense.

Duffy and Millan were a big part of that strategy, and the Lions will have to adapt.

But with those two departing leaves room for a slew of other players to step up. Four sophomores -- Bryce Warren, Jake Himmelstein, Forrest Keys and Shane Cohen -- all look to factor into the rotation for the Lions.

On this particular night it was Cohen, a bespeckled guard who only stands about 5-7, who stood out with his play on both ends of the court.

“The kid (Cohen)’s got a motor, he doesn’t stop,” Baron said. “He's got the quickest hands I’ve ever coached of any player.” 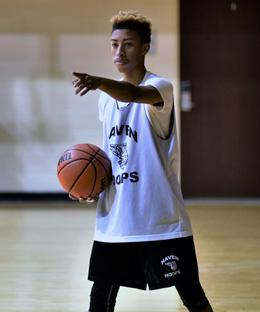 Jahmeir Springfield (above) is one of two returning starters for Strath Haven. (Photo: Mark Jordan/CoBL)

But Strath Haven made noise in the Central League and District 1 last year, and now the team’s challenge is to do that again.

The Panthers will bring back point guard Jahmeir Springfield and big man John Harrar, but outside of that, roles will change a lot for Strath Haven next season.

That showed on the first night of St. Joe’s team camp as the team tried to find combinations that worked.

“Outside of Jahmeir and John, it’s a lot of turnover,” second-year Strath Haven coach Dave McFadden said. “We’re trying to figure out new roles and see who fits where. That’s why it’s important to come to events like this; it’s the only way to get better.”

One player who had a nice evening was forward Cooper Driscoll. After coming off the bench last season, Driscoll could create a formidable frontcourt alongside the 6-9 Harrar. Driscoll made his post presence felt on Friday on the glass and with a few baskets, including a transition dunk against Pennsbury.

There are some things McFadden will want his team to work on after dropping a pair of games on Friday to Pennsbury and Pine-Richland. But this new group will have time to get acquainted and try to keep moving the program forward.

“It’s tough losing after all the success we had last season,” McFadden said. “But guys like Jahmeir and John know what it takes to build and get better.”