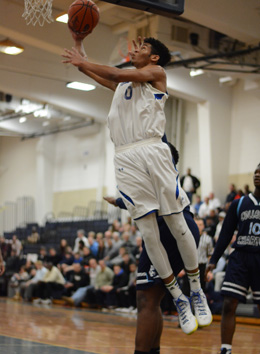 Holy Family has an appeal to incoming freshmen pretty much unmatched across the country. It’s certainly unique among colleges in the Philly area.

The Tigers, fresh off their first CACC Championship, will have a much different-looking roster next season. Nine of their players were seniors and R.C. Kehoe’s team has just four players returning next season from its 2015-16 roster.

The transition brings a challenge, but also a strong selling point for high school seniors: Playing time. The opportunity to earn a spot in an even field was part of what intrigued some of Holy Family’s recent commits, which include both Archbishop Carroll guard John Rigsby and Phil-Mont Christian forward Sean Griffin.

Rigsby and Griffin both committed earlier this month, and each player was looking forward to the opportunity of carving out a role and some minutes in his freshman campaign.

“I wanted to go somewhere where I thought I could at least compete for minutes right away, not guaranteed to play, but at least give myself a chance,” Rigsby said.

Rigsby, a 6-foot-3 sharpshooter, was a reliable third option for the Patriots behind leading scorer Ryan Daly and Samford-bound point guard Josh Sharkey. Rigsby projects as a shooting guard at the next level and could be used either up top or on the block in the Tigers’ 2-3 zone.

The Carroll senior said he followed a lot of CACC action last season and Holy Family caught his attention when he noticed the team's success and senior-laden roster.

“I saw they were top of the league the whole time, so I checked them out and then noticed all the seniors on the roster,” Rigsby said. “It kind of piqued my interest that they were a really good team that was losing a lot of guys.”

Rigsby became the second Philadelphia Catholic League product to commit to the Tigers in the last month, joining Archbishop Ryan big man Austin Chabot. Rigsby has competed against Chabot multiple times and also played in a senior all-star game with Griffin a few weeks ago, so he has a background with some of the Tigers large 2016 class.

Griffin comes into that class as a 6-7 forward, who helped Phil-Mont to one of the best seasons in its history during the 2015-16 campaign. He averaged 15.3 points per game, according to Max Preps as Phil-Mont won the Bicentennial Athletic League title.

It was Griffin’s third consecutive season of averaging at least 14.7 points per game – he topped out at 21.1 his junior year – but he noted one of the main reasons he became a college player is that he adjusted his attitude earlier in his high school career.

“To be completely honest, early on in my basketball career, I was a lazy player,” he said. “…I had great high school coaches and great AAU coaches that instilled in me a mindset of never giving up and working hard – being the first one in the gym and the last one out. It’s benefited me really well.”

Griffin added: “So just the fact that I have a chance to work hard and grab minutes or grab a starting spot next year is an awesome opportunity. I’m looking forward to getting there and working hard.”

There are going to be lots of those minutes up for grabs next season as Holy Family transitions from one of the oldest teams in the country to one of the youngest. But the Tigers certainly won’t lack players out to prove themselves.