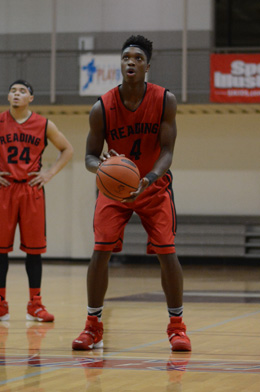 Reading's own Lonnie Walker (above) has become one of the country's most sought-after prospects. (Photo: Josh Verlin/CoBL)

We all know the story of the local star. The one with the entire town on his shoulders. The one whose city makes him who he is only, in return, to be tossed aside and forgotten about when bigger and better things come along.

Well bigger things are certainly on the horizon for Lonnie Walker. After all, schools like Duke, North Carolina, and Syracuse don’t spend their time watching nobodies.

Over the last several weeks and months, Walker has undoubtedly earned the privilege of being recruited by the nation’s elite college basketball programs; fresh off leading Reading High School to a District 3 title and the semifinals of the PIAA Class AAAA tournament, the newly-minted Gatorade Pennsylvania Player of the Year used the first two sessions of Nike’s EYBL circuit to make his case as the best shooting guard in the 2017 class.

In catapulting Team Final to a 6-1 record over two weekends, Walker averaged 18.1 points per game to go along with 4.1 rebounds and three assists. Most impressive, though, were his shooting splits, as the 6-foot-5 Walker shot 51.1 percent from the field and made 19 of his 39 (48.7 percent) attempts from long range.

The first weekend culminated with an invitation from USA Basketball to travel to Colorado Springs and try out for the Under-18 National Team that will compete at the FIBA Americas U18 Championship in Chile.

“Going into this EYBL season I just want to be more dominant, let them know who I am,” he said after scoring 24 points in Final’s third win of the opening weekend. “It was a great run. I was more comfortable since this is my second year, since I’m more of a veteran. Playing in the EYBL now, it’s like I’m used to it. I know what I can do, I know how to play.”

Learning how to dominate had previously been seen as Walker’s biggest challenge, as he was at times too unselfish as a star player. Things clicked late in his junior year, however, as he exploded for 30-plus points on a handful of occasions throughout the Red Knights’ postseason run.

The attacking mentality visibly carried over to the start of EYBL play, as Walker repeatedly demanded the ball during Team Final’s second-half comeback over the Arkansas Wings last Sunday, ultimately hitting the game-winning bucket with 12 seconds left.

“I usually get my team going first then have me go second, but going into the playoffs it was a lot harder for my teammates to score,” Walker said. “I just felt as though I needed to score more, play defense, and just dominate the overall game. So transitioning from state and district playoffs, going into EYBL, it kind of transitioned over.”

With Walker’s outstanding play of late has come a bevy of new college attention. Both Connecticut and Syracuse offered last week, and the Orange’s Jim Boeheim and SMU’s Larry Brown joined assistants from Oregon and UConn in visiting him at Reading this week.

Those schools join an offer list that also includes Villanova, Miami, Indiana, and UCLA, among others, along with interest from North Carolina.

But while “bigger” is almost a definite when it comes to his near future, if you were to ask Walker, you’d be hard pressed to hear him say there’s anything “better” than Reading, Pennsylvania.

A blue-collar town located about halfway between Philadelphia and Harrisburg, Reading was once one of the more prosperous areas in the state. However, a decline in heavy industry crippled the city’s economy and by 2010, the United States census determined that Reading had a higher share of its citizens living in poverty than any other city in the country.

And the Walkers are about as “Reading” as it gets: Lonnie’s father, Lonnie Sr., moved there from Alabama in the mid-90s to play at Alvernia--he’s a member of the Crusaders’ Hall of Fame--and met his future-wife Tamika. They haven’t left since.

“Coming from Reading, Pennsylvania, we’re one of the poorest places in the country,” Lonnie Walker said. “I live well, but seeing people around me going through the rough times, I just want to bring my city together. That motivates me. It makes me work hard. It makes myself just overall be a better person.”

“We can talk about his dunks and his points and things that are very spectacular,” Reading head coach Rick Perez added, “but it’s not that that has really seized the hearts of everybody and really put his thumbprint on this city. It’s the fact that he does it with a smile and that he does it while being so personable and genuinely caring about every single person that he engages with.”

In an era where top players feel the urge to consolidate and play together from the time they’re in high school, rumors began swirling around the end of the season that Reading’s shining star might be taking his talents elsewhere for his senior season; elite prep schools like Oak Hill Academy (Va.) were thrown out there as potential destinations.

Shortly thereafter, though, Walker himself made it abundantly clear that he was going nowhere, telling the Reading Eagle that staying local and playing for his hometown school is “bigger than basketball”.

Comments like that make one thing fairly obvious: whatever “it” is, Lonnie Walker gets it. And even standing in the face of a potential recruiting explosion, that doesn’t look to be changing anytime soon.

“Not too many people know where Reading is, let alone what it’s about,” Walker said. “Reading basically made me and made the person I am today. It’s not about going to a high-level [high] school, it’s just the fact that I’ve got to pay my dues. It’s out of respect, because without those courts I wouldn’t be the person I am.”