BROOKLYN -- The first Nike Elite Youth Basketball League (EYBL) session wrapped up on Sunday, as every team in the 40-team league played one game over six sets of action.

Here’s one half of our notebook on Sunday’s EYBL action; Josh Verlin's notebook can be found here: 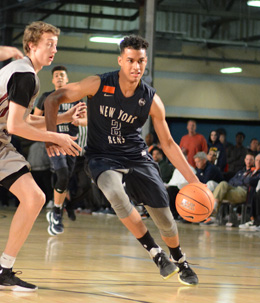 NY Rens wing Jordan Tucker (above) is one of the best pure shooters in the 2017 class. (Photo: Josh Verlin/CoBL)

This is a name that’s been familiar amongst Northeast hoops fans for quite some time now. Ranked as one of the top players in his class for the duration of his high school career, the New York product has been tracked by high-major programs since he was just a freshman.

Now entering his final summer on the AAU circuit, things should be starting to wind down recruiting-wise before the Archbishop Stepinac (N.Y.) shooting guard

But there’s one order of business to be taken care of first: an EYBL championship.

After making the switch from the New York Lightning to the New York Rens, which won the Adidas circuit last year before switching over to Nike, Tucker also teamed up with five-star shooting guard Hamidou Diallo, formerly of the Under Armour Association, to form one of the top wing tandems in all of grassroots basketball.

“We just wanted to all come together and make some special happen, try to win it and take it all this year,” Tucker said. “[Diallo] hit me up like, ‘Yo, I might want to come over to the Nike circuit,’ so, it was like, ‘Let’s make it happen.’ It took a little bit, but we got it done.”

As they’ve done for years now, the two continued to impress throughout the weekend in Brooklyn. Tucker, who stands at 6-foot-7 and is known for his sweet stroke and incredibly refined shooting mechanics, averaged 10.7 points in the Rens’ 3 games, knocking down 45 percent of his 3-point attempts.

But while his jumper is still his biggest strength, Tucker is working to shed a certain label that he feels doesn’t encapsulate all he can do on the floor.

“[I’m trying to prove] that I’m not the same player that I was last year. I was labeled as a shooter last year and I didn’t really like that,” he said. “So I just worked on my game a lot and I’m just trying to develop into a guard. I’m putting the ball on the floor a lot more, scoring in different ways, getting to the basket.”

While he still looks a bit uncomfortable attacking the rim sometimes with his fairly slender frame, he showed signs of improvement in that realm this weekend, including a couple finishes over five-star Westtown (Pa) big man Mohamed Bamba and his 7-foot-8 wingspan.

As far as recruiting goes, Tucker is still pretty open as his school and basketball schedule prevented him from taking any visits over the last several months. He named Syracuse, Arizona, USC, St. John’s, Villanova, Oklahoma, and Indiana as the schools coming after him the hardest, and mentioned new interest from Louisville and North Carolina, with some visits coming in the spring and summer.

Tucker plans on cutting his list after the summer, and hopes to whittle it down to eight or ten schools.

With the Golden State Warriors having just wrapped up the best regular season in NBA history playing substantial minutes with 6-foot-7 Draymond Green at center, the small ball era has begun to make an impact down at college and grassroots levels as well.

Well while everybody else zigs, the PSA Cardinals clearly intend to zag.

With a reputation for pumping out high-major big men, this year’s team is no different. The New York-based squad boasts not just one, but two 6-foot-11 prospects in its starting five.

And while Mohamed Bamba has been considered possibly the top player in the 2017 class for quite some time now, it’s Blair Academy (N.J.) product Gak who is now shooting up recruiting boards.

Gak, who was born in Sudan before emigrating to Australia, named offers from Florida, Alabama, Connecticut, and Kansas, with new interest from Indiana, Miami, and Louisville. With this being his first summer playing AAU, this weekend was his first time playing in front of the bevy of high-major coaches that the EYBL attracts during live recruiting periods.

He admitted that nerves played a part in his relatively pedestrian (3 ppg, 3.7 rpg) numbers, but said his frontcourt mate has already been helping him move past that.

“[Bamba] knows it’s my first time here, so he’s always telling me, ‘You know you’re good, do your thing, just chill, be confident,’ stuff like that,” Gak said after the Cardinals finished the weekend with a 3-0 record. “I wasn’t at my best offensively, as you could see, but I’m happy we got the three wins. Hopefuly I can get my confidence up for next week[‘s EYBL session.]”

Playing with two centers on the floor generally leads to poor spacing and a crammed lane for a team’s guards, but with Gak and Bamba both featuring multifaceted games, that’s yet to become an issue.

“We fit right in because we can do a lot of different things,” Gak said. “The team really respects us and we respect each other. They really don’t mind if we step out to the 3-point line and do moves… I think the coaches trust us with that.”

Unlike many of his teammates, Gak is still pretty new to the recruiting process and has yet to have a chance to learn much about the schools that are recruiting him. Right now, UConn and Indiana are the schools contacting him the most, and with the high school season now in the rearview, Gak can now turn his attention to making some visits and working on cutting his list.

“I need to take some visits, official and unofficial, and just get a feel for what the college life is like,” he said. “Then I think I’ll have a couple schools in mind so I can cut down.”

--Just a day before the start of the EYBL season, Daejon Davis (2017/Seattle Rotary Style) made a huge decision, backing off of his commitment to the University of Washington. The Seattle native had been committed to his hometown school since August, but decided to see what else is out there while he still has time to do so.

“I decided that I wanted to look elsewhere while I still have a chance to play on the AAU circuit, and just kind of explore other options because I never got to look at other schools thoroughly,” Davis said. “This is one of the biggest decisions I have to make in my life… I really wanted to take my time and go back on my decision just to make sure I’m comfortable.”

The 6-foot-4 combo guard, considered one of the top guards in the 2017 class, says Washington is still “at the top of [his] list”, but has already heard from Oregon, Gonzaga, Boise State, Oregon State, Washington State, Indiana, Baylor, and Arizona in the last few days.

--After leading the EYBL in scoring last summer, Gary Trent Jr. (2017/Howard Pulley) was up to his old tricks, averaging 21 points per game in leading his Minnesota-based team to a perfect 3-0 record to start EYBL play. Trent Jr., whose father was a first round pick and played 10 years in the NBA, is an excellent scorer from all three levels. While he shot just 20 percent from deep, he showed off a very refined middle game for someone his age, with an array of floaters and midrange shots. Trent Jr. is thought to be a Duke lean, and was watched by Blue Devils assistants all weekend.