BROOKLYN, N.Y. -- Nike’s Elite Youth Basketball League (EYBL) brings together 40 teams of elite high-school basketball players for five weekends during April, May and July, with almost every Division I school in the country stopping by at some point to check out the action.

The first EYBL event of the 2016 offseason took place at the Brooklyn Cruise Terminal, which Nike transformed into a four-court facility for two jam-packed days of hoops over the weekend.

Here’s a notebook from the earlier part of the action on Saturday’s opening day of the EYBL’s seventh summer: 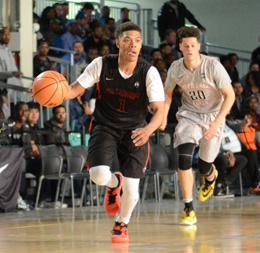 Quade Green (above) had an impressive EYBL debut in helping the PSA Cardinals down Cal Supreme on national TV. (Photo: Josh Verlin/CoBL)

There was no surprise ESPNU handpicked the PSA Cardinals vs. California Supreme matchup as the EYBL Session I game that it would broadcast.

Both marque Nike programs feature elite 2017 big men, as PSA’s Mohammed Bamba and Supreme’s DeAndre Ayton both find themselves in the top five of most class rankings.

So come 2:00, the Brooklyn Cruise Terminal’s main court was packed to the prim with a healthy mix of fans, parents, scouts, and of course, high-major coaches from all over the country. Certainly quite the atmosphere for one to make his EYBL debut.

“This was my first EYBL game ever, so I was nervous. I saw Calipari, Roy Williams, so I was just nervous out there, for the first two minutes then we started getting on a roll,” said Neumann-Goretti guard Quade Green, the newest member of the PSA Cardinals’ backcourt. “I wasn’t worried about [the atmosphere], even though it was on ESPN, but I wasn’t really worried about it. Just trying to get the win.”

Green is certainly no stranger to the major sneaker circuits, having helped lead WeR1 to the Under Armour Association’s regular season championship last summer. It was previously expected that he would make his return to the Nike circuit with Philly’s Team Final.

But according to Green, he and the area’s only Nike program “bumped head” a bit, so he instead opted a few weeks later to make the move up I-95 to the New York-based Cardinals.

“We all family at the end of the day, no bad blood between us,” he said of the situation with Team Final. “I talked to them and told them I was gonna play with the Cardinals, then [PSA program director] Munch [Williams] had dinner with me and my mom.”

So now Green finds himself “driving the Ferrari” that is the loaded Cardinals 17U squad, featuring Bamba and fellow Westtown standout Brandon Randolph, four-star Blair Academy center Deng Gak, and a slew of other high-major recruits.

And after the slow start he mentioned above, Green channelled his inner Dale Earnhardt, racking up 17 points and 10 assists in a 69-68 win to kick off his first and only EYBL campaign.

“Everybody’s just talking about making it to Peach Jam,” he said of his new teammates. “It’s a big challenge for me, going outside my comfort zone of Philadelphia and playing with Team Final, but I did it for me though.

A lanky 6-foot-6 wing, Samuels has always had a ton of potential in his athletic frame, and had realized enough of it that high-majors like Providence, Miami (Fl.) and others had extended offers.

During his junior year at the Rivers School (Mass.), Samuels dialed his play up to another level, and brought that confidence with him onto the courts at the Brooklyn Cruise Terminal on Saturday morning.

In a 68-51 win over The Family (Mich.), Samuels had 13 points, seven rebounds and two assists, attacking the rim time and time again while also knocking down one of his two 3-point attempts.

“Probably just (working on) decision-making, being more aggressive and being stronger with the ball, I think that’s definitely it,” he said. “Also been putting on my body, been in the weight room a lot more.”

For now, he said there’s one school that’s been outpacing the others in their recruiting efforts.

“Definitely Villanova, that’s been the main school that’s keeping in touch the most,” he said. “Besides the national championship, I’ve always liked the way they played, I think it’s a great school, but later on down the line, we’ll see, I’m going to keep my options open.”

Though the Wildcats seem to be the current front-runner, Samuels was rather vague about the other schools that are currently involved in his recruitment

“(After that), I can’t really say,” he said. “I haven’t been paying attention to schools that much, I’ve mostly been focused on me and what I’ve got to work on.” 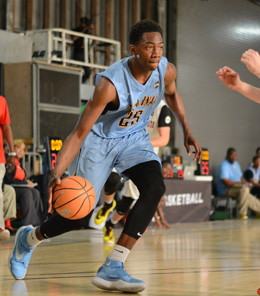 It’s been a good year for this high-energy forward out of St. Augustine Prep (N.J.), who helped the Hermits to a 30-2 record and berth in the Tournament of Champions after winning the Non-Public ‘A’ state title.

And the 6-foot-7, 215-pound forward showed why in his first big-time EYBL game, coming off the bench and playing valuable minutes in a win over Arkansas Wings Elite. Despite being an undersized combo forward, Mutts found his way to eight points and four rebounds, showing why he’s pulling in a variety of mid-major offers due to a higher-running motor.

Coming into the weekend, Mutts held offers from Monmouth, American, Howard and Hofstra; local schools like Temple, Saint Joseph’s and Richmond have also been keeping track of his progress.

In order to take that next jump in his recruitment, he’ll have to continue to expand his game away from the paint and towards the perimeter, something he showed a little bit of on Saturday; Mutts attacked the rim off the bounce on several occasions and made some smart decisions while doing so, making a few crafty interior passes that led to buckets or foul shots.

“Just working my way out to the wing and not just being strictly a post player, because I’m only 6-7 and that’s not a center at the next level,” he said, “so I’ve got to work my way out and become a better wing player, scorer, defender, all of that.”

For those who follow the national recruiting scene, it’s been fairly obvious for some time that there were three main schools in the running for the services of five-star 2017 forward Kevin Knox.

First it was Florida State as the clear frontrunner, as the Sunshine State native’s parents both spent their college years in Tallahassee. Then Knox shot up recruiting rankings and the blue bloods came calling, with Duke and North Carolina breaking through as other potential landing spots.

There appears to be a new contender in the mix, though. Hint? They’re the defending national champs.

“Ever since the [NCAA] Tournament started, Coach Jay Wright’s been calling me telling me to watch their games,” Knox said after his first EYBL game with Each 1 Teach 1. “They’re a little late, but still, they’re a really good school and I’m really looking into them. I really like Coach Jay Wright, his style and the way he plays.”

Wright and Co. have clearly made an impression on the 6-foot-8 Tampa Catholic (Fla.) product, as both parties are working to set up an in-home visit for this coming week, specifically targeting Thursday.

“We’ll see what he has to say,” Knox said of the upcoming visit. “I’ve been watching Villanova ever since the start of the season, so I knew they were a really  good school...I started watching them a little bit more over the course of March Madness, and they proved to me that they’re a really good school.”

It’s certainly too early to call the Wildcats favorites to ultimately land Knox, as he’s also expecting to host UNC, Kentucky, and Florida State this week after receiving a visit from Mike Krzyzewski earlier this month.

All four schools have strong pitches, with Florida State playing the family angle, Duke and UNC touting the uptempo style of play that both they and Knox prefer, and Kentucky boasting its incomparable record of sending kids to the NBA.

But Knox is already prioritizing one key factor as that that will ultimately determine his final landing spot.

“I’m just looking into a program that’s gonna show me that they really want me,” he said. “I’m looking for a coach that’s gonna come in, show that they care for me and that they’re gonna take care of me if I get up there.” 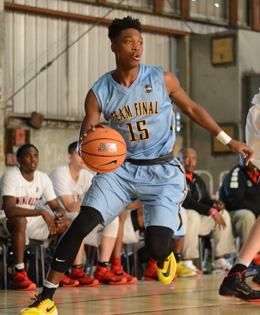 Lonnie Walker (above) had a big game in his first EYBL action of the summer with plenty of coaches watching. (Photo: Josh Verlin/CoBL)

--Huge game from Lonnie Walker (2017/Reading) in Team Final’s opening game, as the five-star wing got off for 23 points on blistering 10-of-13 shooting. Walker got his points in a variety of ways, displaying his highly advanced midrange game and an improved handle that he used to get all the way to the rim on several occasions. None bigger, though, than the game’s deciding play, in which Walker spun off his defender before absorbing contact and finishing with just 12 seconds left to give Team Final a lead that they would not relinquish. With a couple more performances like this one, Walker could have the blue bloods calling with scholarship offers before he knows it.

--In a matchup of arguably the top two high school big men in the country, PSA Cardinals’ Mohamed Bamba and Cal Supreme’s DeAndre Ayton, it was another talented forward who might have had the best performance. Brandon McCoy (2017/Cal Supreme) had 17 points and six rebounds in a losing effort, showing the ability to step out and knock down a jump shot or two as well as play hard on every possession around the rim. Kansas, Michigan State, Arizona, Cal and many more have offered the No. 9 player in the ESPN rankings for 2017, and he could even end up higher than that.

--Despite an 8AM start and some traffic issues causing his Albany City Rocks team to arrive late, Hameir Wright (2017/Albany Academy) put together a breakout performance in his own EYBL opener. Nearly all of his 15 points came in the second half, with names like Jim Boeheim, Roy Williams, Tom Izzo, Sean Miller, and Jay Wright all watching from the sidelines. Villanova, while yet to offer the emerging 6-foot-6 wing, has been involved with Wright for a while now, with some recent developments putting the Wildcats in what seems like a great spot.

“Huge impact,” he said when asked how the ‘Nova’s national championship victory could affect his recruitment. “It shows that they have a championship program. It can’t be overlooked. I met all the guys over there and they’re really cool, I really like them. I look forward to being more involved with ‘Nova.”

--When he transferred to Westtown from Saint Peter’s Prep in 2014 and reclassified, Najja Hunter (2017/PSA Cardinals) had offers from several NY/NJ area schools, like Seton Hall and St. John’s. Since then, his recruiting has gone in a completely different direction. Now boasting a 3.7 GPA as he prepares for his final year of high school, Hunter is being recruited heavily by the Ivy Leagues; so far he’s visited Harvard, Yale and Columbia, while also hearing plenty from Penn. A planned African-American History major, Hunter said he’ll take his official visits after the EYBL season with a decision to come before the 2016-17 high school season.