The biggest year yet of the Under Armour Association circuit was a good one for Philly Pride, which went 8-4 in the “regular season” and won both of its finals showcase games in July; most importantly, they took the rivalry game over WeR1 in May for local bragging rights. The summer was a coming-out party for two players in particular: DeAndre Hunter, a 6-7 wing who averaged a team-best 14.0 ppg and committed to Virginia in the fall; and Charlie Brown, a 6-6 sharpshooter (now 6-8) who hit 45 percent of his 3-pointers and is headed to St. Joe’s this fall. Stevie Jordan (Rider), Tyere Marshall (Rider), Jaekwon Carlyle (Hampton) and Maurice Henry (Delaware State) are all going D-I off that squad as well. 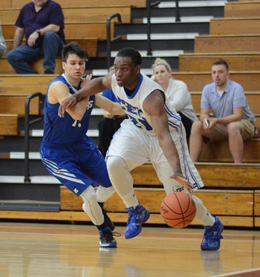 LaPri McCray-Pace (above) will play with Phily Pride's 17Us for the second consecutive season. (Photo: Josh Verlin/CoBL)

With one exception, this Philly Pride team doesn’t have a roster full of players who are currently getting recruited at the high-major level, but that certainly doesn’t mean they won’t be a handful to deal with on the UAA circuit this summer. Buoyed as usual by a collection of prototypical tough Philly-area guards combined with some largely-unproven-but-sizeable forwards, Philly Pride director Kamal Yard has put together a squad that will scrap and claw with the best of them.

The move from Archbishop Carroll (Pa.) up to New Jersey prep powerhouse St. Benedict’s (N.J.) for his junior season seems to have been a big boost for David Beatty. The muscular 6-foot-3 guard--who’s impressed with his athletic ability and potential since his arrival on the CoBL radar at the end of his eighth-grade season--really took off over the last few months, becoming a much more efficient scorer and more complete all-around guard, and his recruitment went through a similar rise. Seton Hall, Memphis, VCU, Kansas State and Miami (Fl.) are just some of the programs chasing Beatty, who should see a few more join the fray when he takes his high-scoring game to the 17U circuit.

The only holdover from last year's 17U squad is LaPri McCray-Pace, who's headed for a prep year after a standout four-year career at Conwell-Egan. A muscular 6-foot-3 wing guard, McCray-Pace helped the Eagles to the PIAA Class AA championship as a junior and led the team back to the state quarterfinals again a senior, finishing with 1,264 points in his Eagles career. McCray-Pace thrives in the open court but has vastly improved his handle to allow him to attack the rim off the bounce; now he needs to become a more consistent outside shooter and the offers will roll in. 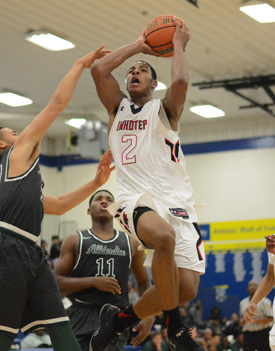 Jaquan Arrington (above) is ready to shine after missing most of his junior year with an injury. (Photo: Josh Verlin/CoBL)

After picking up his first Division I offer, from Binghamton, last summer, Imhotep wing Jaquan Arrington looked primed for a big junior season. But unfortunately he spent most of the year sidelined by injury, halting his recruiting momentum for the being. Now, the 6-5 wing is ready to get back out on the court and make up for lost time, and there will be schools interested in his powerful body, athleticism and inside-out skillset, especially as he thrives off the transition-heavy AAU game.

A pair of Delaware guards could also see their recruitments rise with strong summers. Kyson Rawls, a 5-11 point guard, and L.J. Stansbury, a 6-3 wing, both have low-to-mid-major games and bodies, and schools in leagues like the NEC, MAAC and CAA could find themselves interested if those two play up to their potential. Manny Dixon, a 6-5 wing from New Jersey, brings more scoring ability and length to the perimeter.

What Philly Pride will need to find this summer is a consistent third scorer to step up and take the pressure off Beatty and McCray-Pace; it would really help if that someone is in the post. Carpenter (6-8, 250) and Harrar (6-9, 230) both have the physical stature to bang around with some of the top forwards they’ll see on the Under Armour circuit, but it will be a sizeable step up in competition from what they usually see in the Suburban One and Central League. So it might have to be Sudan, a 6-6 scrapper who helped Chester into the PIAA Class AAAAA quarterfinals, plus Arrington who step up in that area to keep things even on the glass.

Breakdown: Philly Pride doesn’t have a true 16U team this year, so instead they’ve put together a hybrid 16U/17U team that will play up as a 17U squad at non-Under Armour events this summer. There are a few serious sleepers in this group, including Carter, a 6-4 sharpshooter; Sow, a 6-11 forward; and Cotton, a 6-5 lefty wing who’s also a productive perimeter threat. This is a team that will certainly make some noise  playing in several Elevate Hoops and Hoop Group events, with good size up and down the roster (Stevenson is 6-5, Johnson is 6-4) and the versatility to pound it inside or shoot around a zone.