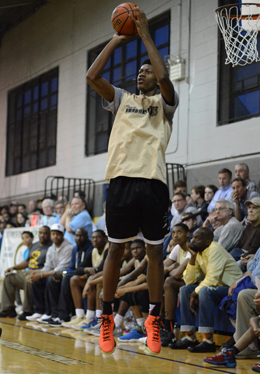 DeAndre Hunter (above) had 35 points in another impressive Donofrio outing. (Photo: Josh Verlin/CoBL)

Here’s a recap from the semifinal action at the Donofrio Classic on Monday, April 11:

Game One: WeR1 had to play its semifinal matchup against Team Hardnett with just five players, and though all five gave it their all over the course of the 40 minutes, it wasn’t enough as a loaded Team Hardnett squad moved one win away from defending its title with a 107-95 win. Virginia commit DeAndre Hunter (2016/Friends’ Central) continued a stellar tournament with 35 points, though he was a defensive force as well. Daron Russell (2017/Imhotep Charter) chipped in 15 and Tony Carr (2016/Roman Catholic) had 13 for Team Hardnett. WeR1 got 30 points from Eric Dixon (2019/Abington), 21 from Sean Simon (2018/SCH Academy) and 20 from D’Andre Vilmar (2017/Roman Catholic).

(See more: check out a photo gallery from the night's action)

Game Two: Ryan Daly’s 3-pointer with 30 seconds left completed the comeback for the Old School Cavaliers, who trailed Raw Sports’ District 3 all-stars almost the entire way but are headed to the championship after an 88-86 win. That capped a 21-point effort for the Archbishop Carroll grad-to-be, whose high school classmate Josh Sharkey (24 points) also enjoyed a positive night offensively; Lamar Stevens (2016/Roman Catholic) added 20 points for the Cavs to round out the trio with 20-or-more. Raw Sports got a dominant night from ‘Nova commit Dylan Painter (2016/Hershey), who had 30 points, while James Williams (2016/Bishop McDevitt) was the only other member of the team from central Pa. in double figures with 14. 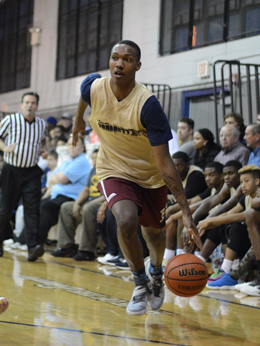 Tony Carr (above) is one of three Penn State commits in the Donofrio championship on Tuesday. (Photo: Josh Verlin/CoBL)

In just a little more than two months, Penn State’s highly-anticipated 2016 recruiting class gets to campus.

Roman Catholic products Lamar Stevens, Nazeer Bostick and Tony Carr are headed up to State College on June 25, just 74 days away as of this writing on Monday night. Nittany Lions fans have been drooling over the trio since Carr and Stevens committed over the span of a few weeks last fall, and it’s only gotten worse since they led the Cahillites to their second consecutive state championship in March.

Now all three are balancing the line between the last few weeks of high school and knowing what comes shortly afterwards, with the expectations of turning around a program that’s largely been an afterthought in the Big Ten.

“I try to take it day by day and just try to enjoy my last days of high school,” Carr said, “but just knowing that college is coming up is kind of exciting.”

In the last few days--like many soon-to-be college players and their respective coaches--they’ve all gotten a packet from head coach Pat Chambers and the Penn State coaching staff, giving them some workout and diet tips and exercises to help them prepare for what they’ll face when they get up to school.

For Bostick, a 6-4 wing who relies heavily on his athleticism and toughness to grab boards and finish around the bucket, it’s a crucial few months towards being ready for the physicality of the next level.

“Taking a lot of protein and which parts of my body I’ve got to work on, to get stronger,” he said. “I like working out and lifting weights, so it’s not that hard for me.”

Carr, a 6-3 point guard, said he hadn’t opened his packet yet, but had a pretty good idea of what it involved.

Before they can get to college, one of the final things to take care of is a second consecutive Donofrio title, which they'll have a chance at on Tuesday night.

“Just to win it a final time would mean everything," Carr said, "and also to do it back-to-back, kind of like how I did everything in high school, so this would just top it off.”

Dylan Painter is going to walk onto Villanova’s campus later this year with some big shoes to fill.

The 6-foot-10, 245-pound center from Hershey, Pennsylvania will become a member of the Wildcat team that is fresh off a national title and will surely be hungry for more.

Painter, along with his massive frame, will bring the competitive energy and will to win to a Villanova team that preaches “attitude,” a phrase that was stitched into the back of their jerseys for the entirety of the 2015-16 season and shouldn’t go anywhere despite the program’s success this past year.

“I think Coach (Jay) Wright does a good job of keeping everybody’s head level so I don’t think that will change how they prepare for anything and I think everything will be the same,” Painter said. “Just maybe a little more buzz around campus and in the media, but I think inside the actual team it’ll stay pretty much the same.”

Painter had an impressive Monday night, as he scored 30 points and added 15 rebounds while going against an Old School Cavaliers frontcourt that boasts plenty of Division I prospects as well.

While scoring and rebounding are both strengths of the skilled big man, shot-blocking is also something he prides himself on, as he added eight blocks to his already impressive statline.

He will look to bring his scoring, rebounding and shot-blocking to a Villanova team that is graduating its starting center, Daniel Ochefu, from its recent national championship run.

Last Monday, Painter got to do something only one other player, Omari Spellman, a five-star recruit from North Royalton, Ohio, in the 2016 recruiting class had the pleasure of doing: watch his future team win the National Championship.

“It was amazing watching that,” Painter said. “I was in Germany for the Sweet 16, the Elite Eight and the Final For so I followed on Twitter because we couldn’t get the live stream. But, I came home and watched the National Championship and was the most excited I’ve ever been in my life.”

Spellman and Painter have already begun to develop a relationship that will hopefully help them build upon the recent success Villanova has experienced. 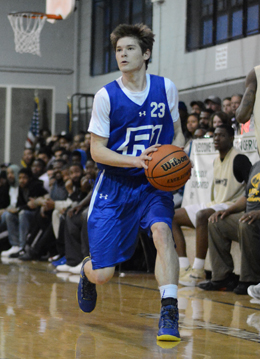 Sean Simon (above) is earning the term "sharpshooter", as he showed by knocking down seven 3-pointers. (Photo: Josh Verlin/CoBL)

Quick Thoughts
--Springside-Chestnut Hill 2018 G Sean Simon is on his way towards being known as the best shooter in the the area, at least in the high school ranks. The 6-3 guard, who plays with WeR1 on the summer circuit, knocked down seven 3-pointers as he made more than he missed in getting to 21 points in his team’s loss. And they came from all around the arc, both off the bounce and in rhythm; if Simon had a look from deep, he was taking it. Has the size to get low-to-mid-major looks before long, but needs to get stronger and improve off the bounce big-time if he wants to go much higher than that.

Breakdown: This has been a matchup that seems destined to happen, as two teams chock-full of some of the best seniors in the area go head-to-head for one last chance to show off their stuff before heading off to their respective colleges.

“This means everything, still, just because it’s bragging rights,” Tony Carr said. “You kind of mix and match the best players in the city, in the state, just try to get some good teams and go at it.”

Lamar Stevens (Old School) and fellow Penn State commits Nazeer Bostick and Carr (Team Hardnett) will be going head-to-head, but you can bet that the Archbishop Carroll duo of Josh Sharkey and Ryan Daly (Old School) will have their say in the final outcome as well. But of course, someone on Old School will have to find a way to slow down DeAndre Hunter, as the Virginia commit has been on a roll this postseason.