(Ed. Note: We will have separate awards for players whose teams participate in the PAISAA tournament, including those in the Friends’ Schools and Inter-Academic leagues, which can be found here)

To come up with our end-of-season awards, we consider several categories, including individual performance, team performance and various intangibles beyond just the statistics.

So without further ado, our honorees: 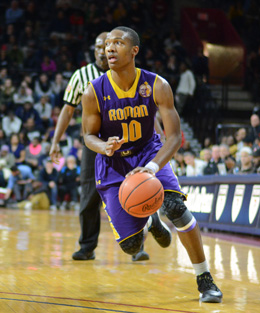 Tony Carr (above) is the CoBL-area PIAA Player of the Year after leading Roman Catholic to its second-straight state title. (Photo: Josh Verlin/CoBL)

*Tony Carr (Sr./Roman Catholic)
The 2016 CoBL High School Player of the Year, Carr capped a terrific three-year run at Roman with his second consecutive Catholic League, District 12 and PIAA Class AAAA state title, going out with one of the more impressive legacies at a school known for its hoops tradition.

A 6-foot-4 point guard, Carr averaged 14.8 ppg, 6.0 rpg and 5.5 apg for the Cahillites, who went 79-11 over the last three seasons with him at the helm. A true "big game" point guard, Carr certainly seemed to step up when the stage called for it, playing some of his best ball on the courts at the Palestra, Hagan Arena and Hershey's GIANT Center.

This fall, along with two of his Roman teammates, he'll be headed up to Penn State to play for Pat Chambers, where he'll be counted on to help build up a Nittany Lions program that's never been considered a hoops powerhouse but has its eye on getting there.

Ryan Daly (Sr./Archbishop Carroll)
Ever since he arrived at Carroll before his sophomore year from State College HS (Pa.), Daly has improved his game by leaps and bounds. The Catholic League regular-season MVP averaged 21.7 ppg and 7.0 rpg as a senior, making 65 3-pointers as Carroll went 23-3 before getting upended by Bishop McDevitt (Harrisburg) in the second round of the PIAA Class AAA tournament. A 6-4 guard who can score from anywhere, Daly de-committed from Hartford several weeks back and is now considering several Division I options.

Xzavier Malone (Sr./Plymouth-Whitemarsh)
Malone’s phenomenal scoring versatility played a pivotal role in leading his Plymouth-Whitemarsh team to a 29-3 record, a District 1 AAAA title and a trip to the PIAA Class AAAA semifinals. Averaged 20 ppg, six rebounds and four assists for the Colonials as he hit the 1000-point mark in just two years at the Suburban One powerhouse. The senior guard, who transferred into P-W from Martin Luther King, will be taking his talents to Rider University this fall.

Zane Martin (Sr./Neumann-Goretti)
From the looks of it, Towson head coach Pat Skerry and crew got an absolute steal in this 6-foot-3 left-handed guard, who went from a bit player as a sophomore to a menace of a scorer as a senior, averaging 18.4 ppg for the PIAA Class AAA state champs. To show just how far he’d come, Martin put on a show in Hershey, scoring 33 points in the title game win over Mars Area High School, his sixth 20-point performance of the postseason.

Lamar Stevens (Sr./Roman Catholic)
Since transferring from the Haverford School to spend his senior season with best friend Carr and the state-champion Cahillites, the Penn State commit took the Catholic League by storm in his lone season at Roman. Averaging 15 ppg this year, the 6-7 Stevens showed off outstanding highlight-reel athleticism in helping his team defend its title, sealing the win with several major throw-downs in the fourth quarter. A powerful, athletic wing, Stevens looks like he's ready for the rigors of the Big Ten. 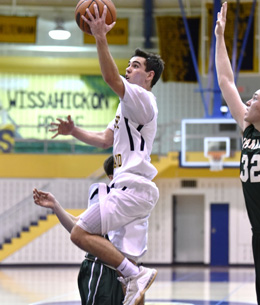 Jawan Collins (Sr./Academy Park)
One of the more dynamic lead guards around, Collins led Academy Park to a state tournament berth after the Knights fell just short of that goal the year before. The 5-10 combo guard, a powerful athlete in a compact package, averaged 21.3 ppg, 7.0 apg, 5.9 rpg and 4.2 spg in AP's high-octane attack, knocking down 55 3-pointers and making over 70 percent from the foul line. He leaves the Knights as the program's all-time leading scorer with 1,626 points, and has several college options to consider.

Danny Duffey (Sr./Lower Moreland)
Duffey capped off a spectacular high school career (1,468 points) by averaging 20 ppg as a senior, leading the Lions into the quarterfinals of the PIAA Class AAA tournament before they ran into the buzzsaw that is Neumann-Goretti. The 5-10 guard went out in style, putting up 33 points against the Saints before departing to a standing ovation, a fitting end for the 2x Bicentennial League MVP.

Brett Foster (Sr./Ridley)
Capped off a tremendous run at Ridley with his second Central League championship, an MVP award and a win in the first round of the PIAA Class AAAA tournament. The East Stroudsburg-bound guard averaged 16.5 ppg to finish with 1,427 career points, second on Ridley’s all-time list. Chipped in five assists and two steals per game plus dropped 48 3s for the Raiders, proving to be one of the tougher lead guards around.

Quade Green (Jr./Neumann-Goretti)
The future is certainly bright for this young guard, whose recruitment is led by schools like Syracuse and Villanova. Green averaged 18.6 ppg for the Saints to help them to that state championship, and he did it as the only junior in a backcourt he shared with three talented seniors; should be a first-team lock next year. Tremendous 3-point shooter off the catch who's an underrated drive-and-kick point guard and defender as well.

Daron Russell (Jr./Imhotep Charter)
One of the most impressive scorers in the area, “Fatts” Russell gets buckets like few around. Averaging 18 ppg for the Panthers, who won 24 games and made it to the PIAA Class AAA semifinals, Russell is terrific with the ball in his hands, where he utilizes a quick first step to get to the rim, and is one of the more creative guards around when it comes to finishing. Has improved his 3-point shooting as well, and has schools like Temple, La Salle and East Carolina on his trail.

Josh Sharkey (Sr./Archbishop Carroll)
The Patriots’ point guard really stepped it up as a senior, averaging 14.5 points, 7.4 apg, 5.1 rpg and 3.3 spg after committing to Samford before the season began. The 5-10, 160-pound guard had previously only played at one speed--fast--but displayed a much more mature and controlled game as a senior that allowed him to shine. Still prides himself on his defense, where he loves to get up into his man and bother opposing ballhandlers. 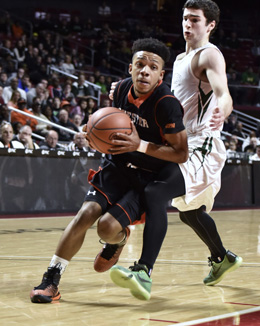 Chester's Khaleeq Campbell (above) returned from an ACL tear to lead Chester deep into the district and state playoffs. (Photo: Josh Verlin/CoBL)

Ryan Betley (Sr./Downingtown West)
One of Penn’s multiple talented recruits, Betley continued to assert himself as one of the best shooters in the area in leading his team to arguably its best regular season in school history. A 6-4 guard, Betley built on his promising junior season in averaging 17.2 ppg as a senior.

Khaleeq Campbell (Sr./Chester)
The Clippers’ point guard returned from a torn ACL a year ago to lead Chester into the District 1 AAAA championship game and the PIAA Class AAAA quarterfinals. Small (only 5-7) but talented, Campbell was a steady outside shooting threat and defender who also knew how to get the ball to Chester’s numerous forwards.

Christian Kelly (Sr./Phoenixville)
Kelly, who has recently committed to Kutztown, is the second all-time leading scorer in Phoenixville history with 1,310 points. He averaged 23.7 points per game, leading his team to an undefeated PAC-10 regular season. Played all five positions for the Phantoms, including leading their full-court press on defense.

Danny Long (Sr./Pennridge)
A two sport athlete who is headed to Monmouth to play baseball, Long led his Rams to a SOL Continental title, averaging 19.1 ppg. The 6-1 guard is also the all time leading scorer in Pennridge hoops history with 1,359 points.

Daequon Plowden (Jr./Mastery Charter North)
Led Mastery North into the PIAA Class AA championship game, where he scored 24 points and grabbed 11 rebounds against a tough Aliquippa squad. Look for the 6-4 wing to attract quite a few schools this summer with his motor, athleticism and ability to hit tough shots. 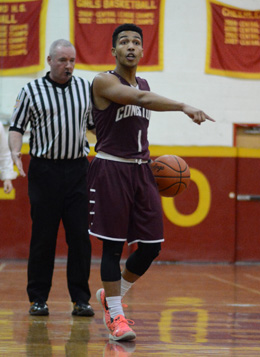 Darryl Caldwell (above) guided Conestoga back to the state playoffs in '16 despite being the team's only returning starter. (Photo: Josh Verlin/CoBL)

Darryl Caldwell (Sr./Conestoga)
The Pioneers’ driving force the last few seasons has been this 5-8 lead guard, who's helped 'Stoga to 42 wins over the last two years and a pair of state tournament appearances. Great distributor who knew when to turn it on and get his buckets.

Dhamir Cosby-Roundtree (Jr./Neumann-Goretti)
One of the area’s most improved players over the last 18 months is this 6-9 forward, who went from incredibly raw to a top-notch rim protector and finisher who can also face up and knock down a jumper. Averaged 14.4 ppg for the Saints.

Tommy Funk (Sr./Archbishop Wood)
Coaches’ dream of a point guard capped off his HS career with a first team All-Catholic nod after averaging 10.9 ppg as a senior, but it’s his ability to set the tone and run the Vikings’ offense that makes him special. Headed to West Point this fall to continue his hoops career.

Sean Griffin (Sr./Phil-Mont Christian)
The Falcons’ 6-8 senior forward made his presence felt during the past season, averaging 15.3 ppg and “around 10 rebounds” according to head coach Glenn Dolton. Has several D-II offers, but several D-Is are sniffing around the 17-year-old with an intriguing upside.

Matt Gnias (Sr./Spring-Ford)
Gnias led Spring-Ford in a historic season, in which the Rams won their first state playoff game in school history. Muhlenberg-bound guard, an athletic sniper, averaged 15.7 points per game, including 24 points in the Rams PAC-10 championship win. 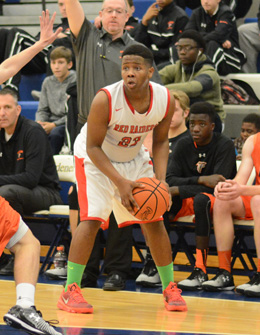 Nasir Bell (Sr./Martin Luther King)
Chestnut Hill-bound combo guard had a solid all-around senior season, averaging 14.4 ppg, 7.5 rpg and 4 assists for King, which was upset by Emmaus in the opening round of the PIAA Class AAAA playoffs.

Nazeer Bostick (Sr./Roman Catholic)
”The Horse” helped Roman to back-to-back state titles, averaging 11.6 ppg for the season but 13.5 ppg during the playoffs. Penn State-bound 6-4 wing is a tenacious rebounder and defender.

Rome Boyer (Sr./Coatesville)
A bulky sharpshooter headed for Gwynedd-Mercy this fall, “Big Shot Rome” Boyer stepped up on numerous occasions for a senior-laden Coatesville team that took home a Ches-Mont championship this season.

Justin Jaworski (Jr./Perkiomen Valley)
Dynamic guard, a two-sport athlete who also stars on the football field as a wide receiver, averaged 19.7 ppg for the Vikings. Led his team to first district playoff win in school history.

Ryan McTamney (Sr./La Salle College HS)
Ursinus-bound wing, a 6-5 sharpshooter who could also score inside, averaged 16.9 ppg for the Explorers, who won 17 games but fell just short of the state playoffs.