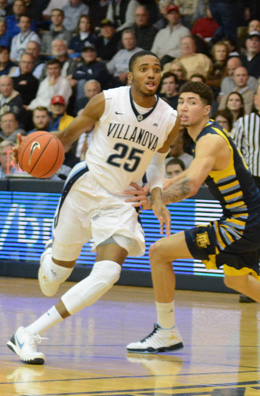 Villanova’s defense has shut down opponents all season, ranking 15th in the nation in points allowed. And it’s been especially good through the first four rounds of the NCAA Tournament, limiting teams to just 63 points per game.

But the Wildcats haven’t faced a threat like the one they’ll see on Saturday in Houston in quite some time. December 7th to be precise.

Oklahoma’s Buddy Hield wasn’t quite the phenomenon he turned into when the Sooners stomped Villanova, 78-55, nearly four months ago in a game at Pearl Harbor. Since, Hield has turned into the leading National Player of the Year candidate, a fan favorite and a threat to go off for 30 points or more on any given night.

Hield and the Sooners stand between Villanova and a chance at playing for the national title.

“He’s probably going to be the National Player of the Year, said Villanova junior Josh Hart, who will likely be one of a few different Wildcats tasked with slowing Hield down.

“I’m not going to come out here and say ‘I’m gonna shut Buddy Hield down. Buddy Hield is gonna have eight points the whole game.’ Not at all. He’s a great player. He’s probably the most talented offensive player in the country. It’s not just the one person who’s going to guard him, it’s about the four guys behind him.”

Hart might get the start on Hield -- who averages and eye-popping 25.4 points per game on 50.4 percent shooting and is just 84 points shy of 1,000 for this season alone -- but he won’t be the only player assigned to contain Buddy.

The Wildcats have a budding defensive star in Mikal Bridges, whose long arms disrupted Kansas multiple times in the Elite 8. Bridges might get some possessions going against Hield, but whomever he’s defending, he has been making the Villanova defense stronger.

A redshirt freshman, Bridges disrupts ballhandlers with his 6-foot-7 frame. He’s been credited with 42 steals and 24 blocks this season and there are plenty of other plays his long arms have made that haven’t shown up in the box score.

In his first season of eligibility, defense has been Bridges’ ticket on the floor.

“About halfway through the year is he started to develop everyone's trust,” Villanova coach Jay Wright said on Monday. “He is so solid offensively, he makes free throws, but defensively he's been a stud and he guards everybody. In this program when you defend and rebound like that, everyone trusts you. More so than the coaching staff, the players trust you.

Off the bench, Bridges -- a Philadelphia native and Great Valley graduate --  averages 20.4 minutes per game, scoring 6.3 points per game. He was on the floor for 26 minutes in the win over the Jayhawks and made six steals, helping contain the likes of Wayne Selden, Devonte Graham and Frank Mason III.

Bridges’ size allows him to matchup against positions 1-4 on the court and it’s one of the reasons he’s so effective when Villanova switches to its zone.

“He’s lanky, he’s athletic. He has all the great attributes of a great defender,” Hart said. “And sometimes, guys have those attributes, but they don’t have the fight in them to be great defenders. He has that, he takes pride in that.

“...We’ve put him on point guards because of his length. We did that with Mason, we did that with (Seton Hall’s) Isaiah Whitehead. And he’s able to guard these little guards."

That should help Villanova against an Oklahoma offense that has three other players average in double-figures, including guards Jordan Woodard (13.0 ppg) and Isaiah Cousins (12.8 ppg).

“You just have to execute the game plan. Watch the film and be locked in and focused on what we need to do,” said Bridges, who has become accustomed to being a focal point of what the Wildcats are doing defensively. “It’s different things for different guys, but we have to be prepared for what coach Wright and the assistants want us to do.”