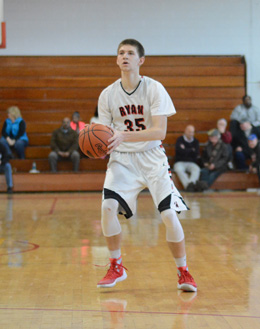 Austin Chabot (above) is attending college in his backyard at Holy Family. (Photo: Abigail Hoffer/CoBL)

Chabot, an Archbishop Ryan senior, hadn’t talked to the Holy Family head coach since the Tigers had really started recruiting him late in February; instead, assistant coach Ryan Haigh had been his primary contact.

On Tuesday, Chabot visited the Division II school to tour the campus and facilities and meet with several other players on the HFU roster, as well as finally get a chance to speak with Kehoe.

Before departing, Chabot met with the fifth-year head coach in his office, where things got serious.

“As soon as he said ‘I want you here’ and he gave me a whole speech about how much he liked me, the type of person and player I am, it was an easy ‘yes,’” Chabot said.

“I kind of went speechless,” he admitted. “He said you can take a day or two, however much time you want to think about it, and I was speechless for about 10 seconds until it came out.”

Chabot originally committed to D-III DeSales last fall, but re-opened his commitment early in the season. In the back of his mind, he believed he had a chance to earn a spot on a Division II roster, and set out to prove it.

The 6-foot-6, 190-pound wing with a smooth outside shot averaged 10.7 ppg for a Raiders squad that went 16-9 this season under first-year head coach Joe Zeglinski, advancing to the Catholic League semifinals at the Palestra before being knocked out in the district play-back round at the hand of Simon Gratz.

Before Kehoe extended the roster spot invitation, Chabot's other primary options were to go back to DeSales or another D-III school, Arcadia. But he couldn't turn down the opportunity to play at a D-II program, even one that's right in his backyard.

“It was something I worked for and thought i really deserved and for it to actually become a reality is just amazing, I can’t even describe the feeling," he said.

Holy Family is only eight minutes from Ryan, with both tucked in between I-95 and Woodhaven Road in Northeast Philly.

Chabot’s trip to school will get considerably shorter for the next four years.

“I’m sitting out on my back deck and I’m looking at the (Holy Family) campus right now,” he said. “Literally a block away.”

A planned mathematics major, Chabot intends on becoming an actuary after his student-athlete career is over.

“I have a gift with numbers, it’s just my thing,” he said. “My mom would tell you that since I was young, I won’t pick up a book to study unless it’s exams but I’ll go in and score a 95 or above, it’s just easy for me.”

Kehoe and his staff have a lot of work to do this offseason, with nine seniors and the overwhelming majority of the Tigers’ minutes and production graduating after a 26-6 season that saw them win the CACC championship and host the East Regional of the D-II NCAA Tournament. Maurice Smith and Shane Neher’s combined 48 minutes are the only returning experience to the roster.

The roster is far from finished, but either way this is going to be a group that won’t have heavy expectations from the outset with basically a new team feeling each other out.

“We think we can be something special, it’s not going to happen right away, but R.C. knows what he’s doing,” Chabot said. “He came into a program that won nine games in two years to 99 wins in five years, which is unbelievable. So he obviously knows what he’s doing and I think (with) hard work from everywhere, we have a chance, we have a shot, absolutely.”