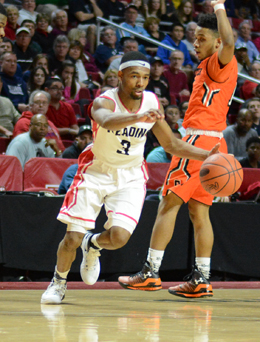 Khary Mauras (above) had 17 points and 13 rebounds as Reading topped Chester, 73-64 on Saturday. (Photo: Josh Verlin/CoBL)

As usual, Temple’s Liacouras Center was a sea of red for a big-time basketball game.

Except it wasn’t the Owls that had fans packing the lower bowl of the 10,000-seat facility on Saturday afternoon.

And even though the Reading players know how much they mean to the community surrounding one of the biggest schools in the state, walking out into that supportive crowd with Chester only half the distance away set the tone.

“That’s really surprising, knowing it’s all the way out in Philly,” senior guard Khary Mauras said. “We look up in the stands and see all our supporters and it’s great--but once the game starts, we just focus on what’s between the lines.”

The Red Knights made sure the crowd didn’t go home disappointed.

Junior wing Lonnie Walker dropped 30 points and Mauras added 17 as the Red Knights stormed past the Clippers, 73-64, to advance to the PIAA Class AAAA semifinals.

It’s the first time Reading has made it to the state’s Final Four since 1983, well before anybody on the current roster was alive.

“Making the first round was terrific, and winning the second round was amazing, so now that we’re even past the third round, it’s like everybody’s scratching their heads, ‘who’s this reading team, we didn’t expect them to come this far,’” Walker said. “The feeling is just amazing, it’s one of those feelings you can’t really express to anyone.”

While Walker, a 6-5 junior wing with offers from numerous high-major schools including VIllanova, Oregon, Indiana and more, provided his usual fireworks, he had plenty of help from a strong supporting cast.

Mauras had 13 rebounds to go along with five steals and five rebounds in a complete all-around performance from the small-college recruit. Even though the 5-11 guard is shorter than all but one player in the Chester lineup, he skied time and time again to pull down more boards than anybody else in the game.

It was an effort which didn’t surprise his more highly-touted teammate in the least.

Maury’s effort was representative of a Reading squad that was tougher nearly all game long against a taller Chester lineup.

After taking the lead for the first time at the end of the first quarter, the Red Knights (28-3) extended the lead over the next two-and-a-half quarters, continually showing which team simply wanted it more--whether it was through forcing turnovers, sharing the ball, hitting big shots or attacking the glass.

The Clippers (22-8) led by four points early thanks to three dunks by 6-foot-9 senior Maurice Henry, but that was just about the only time they were able to get anything going inside with any consistency despite Henry (six points/six rebounds, 6-6 junior Jamar Sudan (11 points, five rebounds) and 6-7 Marquis Collins (five points/four rebounds) standing taller than anybody in Reading’s rotation. 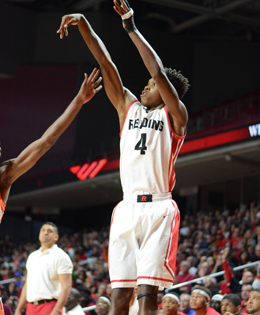 Reading’s first lead was 16-15, just near the end of the first quarter, and the Red Knights would only extend it from that point onwards.

Every time Reading went on a run, whether it was 5-0, 6-0 or 7-0, Chester could only respond with one bucket, rarely stringing together more than two.

Walker hit four triples during his stellar afternoon, none bigger than the one he hit to end the third quarter and put his team up 46-34 with only eight minutes to play.

"Making that 3, it gets everybody pumped up, like ‘oh yeah, we’ve got this, we’ve got to keep on playing, keep on being aggressive,'" Walker said. "Once I made that 3, I don’t even know how to explain it, honestly, it was just a different stage, a different level.”

It was only when the game was 66-46 with three minutes left that the Clippers finally found their offense, scoring 18 points in the final 180 seconds to close the gap from 20 to its final nine.

“Some nights that happens, that’s basketball,” Chester coach Larry Yarbray said. “There are nights where shots you usually make aren’t going in, guys start pressing a little too much. I told them we were down by 20 points at halftime before and came back against King to win that game. But when we did that, we played together, not as individuals. Probably in that third quarter and into the fourth we played as individuals.”

Reading's opponent in the semifinals will be either District 1 champions Plymouth-Whitemarsh or District 12 upstart Simon Gratz.

After spending all offseason going through a workout regimen that included, according to Walker, "lifting, two-a-days (and) hot yoga," the Red Knights are too close to the school's first state championship to do anything but just keep plugging away.

“In my opinion, we worked harder than mostly every team in the state of Pennsylvania," Walker said. "We feel as though we’ve worked way too hard for it to end.”