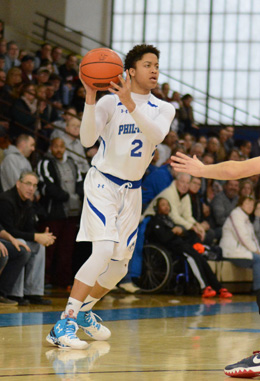 The second round of the PIAA Class A and AAA playoffs take place on Tuesday evening, with eight games in each bracket to decide the state quarterfinalists.

Here are the games with local interest (district-seed in parenthesis):

Skinny: York Country Day was one of three unbeaten teams in Class A entering the tournament, and now are one of two left standing, along with Homer Center, after St. John Neumann lost in the first round. The Greyhounds (23-0) are led by junior guard DeAireus Brown, who transferred in from Northeastern HS over the offseason and scored one tick above his season average with a 23-point outing in the opening-round win over Sullivan County. He’s helped spur a turnaround from a 5-11 season last year, but they’ll face quite a challenge in the Bicentennial Athletic League and District 1 champion Griffins. Phil-Mont (25-1) is led by 6-8 senior forward Sean Griffin, part of a talented frontcourt that includes 6-4 senior Osaze Thornton and 6-3 junior David Giuliani.

Skinny: Delco Christian expected to be in this round, but the Knights probably didn’t expect to face Shenandoah Valley at this point. St. John Neumann was 24-0 heading into the playoffs but Shenandoah (18-8) overcame a double-digit deficit to down the Golden Knights. Joel Santana had a game-high 33 points for the Blue Devils in the win. Delco Christian’s Wyatt Harkins didn’t have quite the same success initially against Greenwood, but the 6-2 senior guard finished with 23 points in the win, 21 of which came in the second quarter and later. Harkins, who’s hearing from several D-II and D-III schools, has been carrying the Knights ever since the other two of the team’s three leading scorers, senior forward Grant Fischer and junior guard Devin Hill, were dismissed from the program in February.

Skinny: Old Forge advanced to the second round for the first time in five years, despite going to the PIAA playoffs in each of the last 10 seasons. They’ll face a MCS program that won a state championship in 2011 and lost in the title game in 2014, and though the Mighty Elephants (12-14) don’t have a Jeremiah Worthem or Quadir Welton--both Division I players--on the roster, there’s talent in the form of junior guard Malik Archer, senior guard Darrin Manning and senior forward Nazir Gossette, leading an uptempo, athletic group that can cause some serious issues with its speed and length. The Blue Devils (15-9) are led by senior guard Nick Pelosi, who had a 24-point, six-steal, five-assist game in the first-round win over Cowanesque Valley.

Skinny: The defending state champions, Constitution is an almost completely different cast of characters from the senior class that Rob Moore rode to the last three state brackets. But the Generals still looked plenty good in rolling over the Lions in the first round, and now they’ll face the District 5 champions out of the south-central part of the state. Southern Fulton (22-5) overcame a 12-for-22 performance from the foul line in its opener to handle a West Shore squad which was one seed behind LCCS out of District 3-A. The Indians were powered in the opening round by senior Trent Rider, who dropped 27 points, with Dylan Gordon adding 16. Constitution got 26 points from junior Tamir Green, though the 6-1 guard took 24 shots to get there. At some point this tournament, Moore’s group is going to get challenged, and that’s when he’ll find out how prepared his team really is. 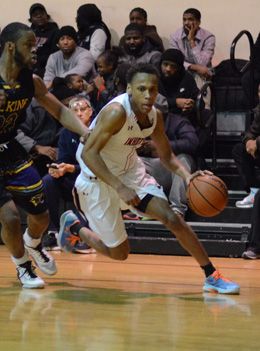 Daron Russell (above) and Imhotep Charter are looking for their first state championship since 2013. (Photo: Josh Verlin/CoBL)

Skinny: The Del-Val win streak hit 18 straight as the Warriors (25-4) held off Gettysburg in the first round, and they stick with District 3 opponents with a quarterfinal spot on the line. Jason Harrigan’s been getting incredibly balanced scoring from his top five, like what happened in the opening-round win: Waheem Lowman (16), Antwuan Butler (15), Makhi Morris (13), Semaj Motley (10) and Wade Lowman (9) all got involved, but their lack of depth is the biggest issue moving forward. Despite being the fourth seed out of District 3, Lampeter-Strasburg (24-4) has had a very good season of its own, though the Pioneers did lose their last two games heading into the state playoffs. Matt Achille (20 points) and Ben Sandberg (15 points) led Lampeter in its opening win against Berwick, which was the second-lowest point total the Pioneers had allowed all season. Whether or not they can slow down Del-Val is another question.

Skinny: Tough draw for Lewisburg (26-2), as the District 4 champs have to play a 22-5 Panthers squad that’s certainly better than its seeding indicates. Losses to Del-Val Charter in the Public League quarterfinals and Archbishop Carroll in a seeding game have certainly awoken the Pub regular-season champs, who have a bevy of Division I prospects on the roster. Senior guard Jaekwon Carlyle is bound for Hampton, high-scoring junior guard Daron Russell has offers from Temple, La Salle, East Carolina and more, and 6-5 wing Koby Thomas is a high-flying junior who loves to run the break and finish above the rim. You can bet they’re licking their chops for an opportunity to rematch against Del-Val in the quarterfinals, but first they’ll have to get past the Green Dragons. Lewisburg is powered by 6-7 senior forward Sam Allen, a talented face-up big man who’s the school’s all-time leading scorer, surpassing a 44-year-old record with his 1,362nd point back in December.

Skinny: Though the District 2 champion Cavaliers roll into Freedom HS with a 25-2 record and on a 19-game winning streak, they haven’t gone up against anybody the likes of the Saints this year. Neumann-Goretti (23-4) is one of a few teams that can boast a starting five that all have Division I offers: senior guards Zane Martin (Towson) and Rasheed Browne (FGCU) are committed while Vaughn Covington (VMI offer) is undecided; junior guard Quade Green and Dhamir Cosby-Roundtree are both consensus four-star recruits with offers from the likes of Syracuse, Temple, Villanova and more. The Saints have looked a little shaken since losing to Roman in the PCL championship, losing to Del-Val in the District 12 AAA championship and leading ELCO by only five at the half before pulling away, but capable of snapping out of that funk at any time. Scranton Prep will need a banner day from its junior backcourt trio of Logan Bailey, Padday Casey and Nick Dende to keep up with the two-time defending champs.

Skinny: Lower Moreland’s first-ever state playoff win gives the Lions a matchup with District 11 champ Pottsville, which has yet to taste defeat this season (28-0). The Crimson Tide have had a tremendous season despite graduating four seniors from last year, and are back in the second round for the third consecutive season while looking to advance for the first time in that span. The offensive balance they displayed in their first win--Jordan Melochick and Maldeen Thomas had 13, Jordan Abdo 11--has been a reason why they’ve been so good this year. Lower Moreland leans a little more heavily on one player, as senior guard Danny Duffey has to set up the Lions’ offense and often carry the scoring load as well, but he got plenty of help in the win over Milton Hershey. Lower Moreland hit 14 3-pointers in that win, getting 20 points from Tyler Millan, 19 from Nick Smolda and 16 from Dicky Rhodes. Another shooting performance like that will give them a good shot at a quarterfinal bid.

Skinny: Archbishop Carroll had perhaps the most impressive first-round performance of any team in the entire state, running out to a 48-9 halftime lead. Ryan Daly, a Hartford-bound senior, scored 18 points in the first eight minutes and finished with 23 despite sitting the fourth quarter; fellow senior John Rigsby added 21 for the Patriots. Last year, Carroll made it to the state final out of this same spot in the bracket, and they had to get through the District 3 champion in this exact spot, it was a fairly easy 83-54 win over Steel-High. McDevitt, powered by 30 points and 11 rebounds from 6-4 senior big man and 1,000-point scorer James Williams, had no troubles with District 11’s third seed Salisbury Twp. in its opener, but they know things will be much tougher against one of the top teams in the Catholic League. Last year, the Crusaders made it to the quarterfinals before falling at the hands of eventual champ Neumann-Goretti.