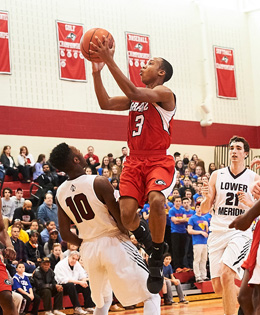 Here are some notes & quotes from Saturday's PIAA playoff action:

Gratz downs Lower Merion in Stewart's first states experience
When Lynard Stewart played basketball at Simon Gratz, the state playoffs weren’t something he was able to take part in; until 2005, Public League teams didn’t participate in the PIAA state tournament.

His first time experiencing states came Saturday afternoon as a part of his first year coaching at his alma mater, and it couldn’t have gone better, as Gratz took down one of the area’s most highly-regarded programs in Lower Merion, advancing in the PIAA class AAAA tournament by a final score of 63-61 in overtime.

“At times it doesn’t hit me until I get a lot of text messages saying ‘congrats,’ because to me I’m just going on coaching, trying to win the next game,” Stewart told CoBL by phone after the win. “It doesn’t hit me until people say ‘good game, well coached,’ and I start realizing, we’re doing something special.”

“To be able to be in (the state tournament) now is something special,” he added. “It’s March, and we’re still playing, I’m still practice planning, it’s exciting for me to be involved in the states.”

That first states experience was certainly a stressful one, as Stewart’s Bulldogs took the Aces into overtime. The final seconds of the extra period were a roller coaster of emotions.

After Tyriek Meridith missed the second of two free throws with under 10 seconds to play, Lower Merion gained possession and made a push down the floor. Meridith, however, was there to jar the ball loose at mid-court and buy enough time for the clock to run out.

“It was up-and-down, because in regulation I thought we could have had it, if we had just gotten one rebound and one more stop,” said Stewart. “When it came down to the end and the final buzzer went off it was a big relief.”

Meridith, who has been a key for Gratz all season, finished the afternoon with a team-high 16 points and seven assists.

“We’ve been relying on Tyriek all year, and he’s coming around and understanding what we really need of him at the right time of the year,” Stewart said. “He controls the game, he had a couple hockey assists and two or three other assists that really helped out, he drove to the lane and kicked it out for two big shots. He’s been the leader of the team and I think he’s really fulfilling that role now for us.”

On top of Meridith’s performance, Nasir Campbell chipped in a double-double with 10 points and 14 boards, and Rashon Johnson added 15 points of his own.

Adding to the special nature of this victory was the fact that it came against such an upper-tier program like Lower Merion.

Leading the way for the Aces in defeat was Jeremy Horn with 16 points and 12 boards.

Contrary to what one might expect, according to Stewart, he’s “already done celebrating.”

“To be honest, I’ll go out, have a drink, and then we’ll find out who we’re playing and then try to get focused,” he concluded.

Ridley runs by Wilson, sets school single-season wins record
When Ridley’s Brett Foster is playing at his best, the Raiders can beat almost any opponent sent their way. It’s no secret that the East Stroudsburg commit is the catalyst for a team that won all but one of its regular season contests, as he averaged about 19 ppg.

So what happens when he’s not up to par?

The Raiders found that out in the first round of the PIAA class AAAA state tournament, as they received crucial contributions from several other players and rode an all-around stout defensive performance to a 50-34 victory over District 3’s Wilson West Lawn.

“We played very well defensively, held them to twelve at the half,” said Ridley head coach Mike Snyder. “We were not making shots in the first half, but our defense was pretty solid throughout the entire game, and then we started to make more shots as the game went on.”

Foster, who only scored four points in the victory, was hampered with a back injury he received in the District 1 AAAA third-place game against Lower Merion.

The leading scorer in lieu of Foster was fellow senior Julian Wing, who dropped in 15 points for Ridley.

“(Foster) didn’t get a lot of good practices in this week, so he was a little bit off tonight, but Julian had another solid game, he was solid rebounding and everything,” said Snyder.

Wing wasn’t the only player who played a big role in the Raiders’ team effort. Ryan Bollinger had 11 points, while Damir Fleming and Liam Thompson each added 9.

Ridley used a 16-9 third quarter to pull away from Wilson--which was led by Christian Sload with 14 points--taking a 37-21 lead through three frames and never looking back.

The win not only cements the Raiders as part of the state’s final 16, but also notches a school record win total of 27 wins, tying the 1985-86 edition which went 27-6.

“For the players, since the school started that’s the most wins record-wise, one of the things we said before the game was it would be nice to get a state win and if you guys get this win you’ll have the best record in the history of the school,” Snyder said. “It was a little extra motivation.”

That said, their two seniors who experienced last year’s state title run shined in their return to the state playoffs, as Egan trounced Upper Dauphin by a final tally of 62-38 in the PIAA class AA first round Saturday evening.

Seniors Vinny Dalessandro, who had a game-high 23 points, and LaPri McCray-Pace, who chipped in 14, were the driving factors offensively in the dominant victory.

“With their confidence, with that experience, it gives the other kids confidence,” said Conwell-Egan head coach Frank Sciolla. “It was good, because you need to get senior leadership.”

A large key to Egan’s dominant victory, however, was their defense, which was a point of emphasis coming in. The Eagles held Upper Dauphin, a usually high-scoring team, to under 40 points, just 26 of which came in the first three frames.

“Upper Dauphin came in scoring 68 points a game, so obviously we didn’t want to be able to give them that type of look,” Sciolla said. “We did a pretty good job in terms of what we were doing defensively.”

Going forward, the focus isn’t on defending what last year’s team did. Having had a significant turnover from last season’s roster to the current group of players, the Eagles are focused on winning with what they have now.

“We have so many guys that are new in terms of getting experience in this situation,” said Sciolla. “I said today before the game, ‘it’s not about defending a title, it’s about winning a title in 2016 with the guys on this team.’”