District 1 AAAA: P-W back in title game with win over Lower Merion 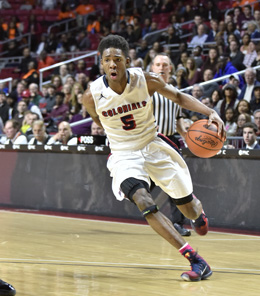 Plymouth Whitemarsh coach Jim Donofrio noticed something different about his current team from the one which also reached the District 1 AAAA semifinals at the Liacouras Center last season.

This version of the Colonials isn’t just pleased with making it this far.

That’s a reason this veteran Plymouth Whitemarsh, which starts five seniors, was able to respond so well when Lower Merion went on a few runs Tuesday night. The second-seeded Colonials calmly and collectively handled any spurt by the Aces and eventually pulled away for a 53-42 win, punching their second straight ticket to the District 1 AAAA title game.

“That’s what a senior strong team does that believes in itself,” Donofrio said. “Last year, just getting here was the enjoyable part.”

A year ago, Plymouth Whitemarsh fell to Abington in the championship game.

The Colonials never trailed 11th-seeded Lower Merion in the second half of Tuesday’s win, but their lead was in jeopardy on two occasions.

The Aces tied the game, 32-32, when KJ Helton nailed a 3-pointer to make Plymouth Whitemarsh’s four-point halftime lead disappear a bit more than four minutes into the third quarter. However, the Colonials responded with the quarter’s final five points, the first two of which came on an Xzavier Malone layup right after Helton’s triple.

Plymouth Whitemarsh eventually stretched its lead to nine early in the fourth quarter, but Lower Merion answered again, scoring six in a row to cut the Colonials’ lead to 43-40. From there, the Aces would not score again for nearly four minutes as Plymouth Whitemarsh pulled away to victory.

“We’ve been in those situations before, pretty much every playoff game,” said Malone, who finished with a game-best 19 points. “Teams have gone on runs and we have come back with the answer. We’re not intimidated. We know we can compete with everyone, so we show them why our seed is so high and that everything they heard about us is true.”

Malone led an offensive charge for the Colonials which shot 52.8 percent from the field and also got 14 points from guard Oakley Spencer and another 12 points and five rebounds from Mike Lotito. But Plymouth Whitemarsh had to work around a bevy of offensive mishaps that resulted in turnovers due to Lower Merion’s press and traps.

“We were so amazingly bad,” Donofrio said referring to his team’s early turnovers. “…We worked on it yesterday (at practice) and we kept throwing it away then, too. So I’m sure Gregg (Downer) saw that on film and said ‘Let’s turn this thing up.’ But I’m happy that we had to figure it out, on that floor of all places. But we did enough. We’re quietly overcoming our casual cool – where we have moments where we just relax.”

The Colonials also did it with defense. They forced multiple Lower Merion turnovers themselves and though big man Jeremy Horn had 12 points for the Aces and guard Noah Fennell added 11 and a game-high three 3-pointers, the Aces did not score more than 12 points in any quarter.

Defense has been a big part of this playoff run for Plymouth-Whitemarsh, and the team is holding opponents to an average of 43.8 points per game in the District 1 Tournament. It’s been a big change for the team, said Donofrio, one that could keep his team in a game against any opponent.

“Defensively, what I saw late in the season until now, it’s going to give us a chance in every game,” he said. “When you hold teams to 30s and 40s and some of the best teams in the District, we kind of hung our hat on that tonight.”