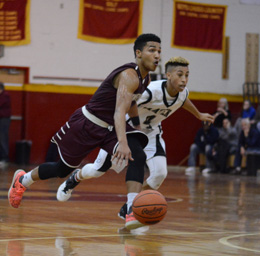 Darryl Caldwell (above) and Conestoga are in the Central League championship game for the third consecutive season. (Photo: Josh Verlin/CoBL)

To earn a chance at Central League championship revenge, Conestoga first had to make good on another loss, this one from earlier in the season.

The Pioneers fell victim to a last-second layup on the road to the Panthers of Strath Haven back in December, one of only four league losses the defending league runners-up suffered during what was supposed to be a rebuilding year.

One down, one to go.

Thanks to a suffocating early defense and just enough offense to hang on, ‘Stoga will have its shot at Ridley to avenge last year’s league title game loss after taking down Strath Haven, 42-40, at Haverford High School on Saturday night.

“We knew Strath Haven had beaten us before, so we really wanted to come back and get revenge,” senior point guard Darryl Caldwell said. “We all got up for this game, we all wanted to go to the Central League championship again.”

The final score was rather misleading for a game that featured a nine-point first half by Strath Haven and a double-digit Conestoga lead that lasted for most of the third and fourth quarters.

Early on, Haven couldn’t buy a bucket, scoring two points in a first quarter that saw the Panthers go 1-of-11 from the floor; the Pioneers, meanwhile, hit five first-half 3-pointers

“I thought we did a really good job early of taking away the shots that Strath Haven wanted to get," Troy said. "Then offensively I thought we were able to get good looks at the bucket and knock them down.”

What Conestoga was able to take away was Strath Haven's 6-foot-8 center, junior John Harrar, using a combination of Mayock, a 6-4 junior, and 6-5 senior Jack Baker to bother Harrar all evening and limit him to just six points, all in the second half.

Having Baker, who's been dealing with various injuries, back in the lineup in the stretch run could provde invaluable to a 'Stoga team that's got depth on the perimeter but doesn't have a ton of bulk inside.

Haven finally got Harrar going a little bit with two buckets in the fourth quarter, but by then it was too little, too late.

Only three 3-pointers in the final minute and a half, including two in the last 10 seconds, got the Panthers within a bucket of the Pioneers for the final score.

Did Strath Haven coach Dave McFadden find it somewhat ironic that his team’s shots finally started dropping only after the outcome had been decided?

The only Haven player who had anything going all game was senior wing Alex Ischiropoulos, who had 16 points, including eight of the team's nine in the first half. Jahmeir Springfield finished with 12 only after he hit two of those last-minute 3-pointers.

Conestoga’s trip to the Central League title game is its third in a row, though Mike Troy has seen his team fall just short both times: two years ago to Lower Merion, and last year to Ridley after ‘Stoga went through the whole league slate unbeaten.

But he doesn’t want to let the shortcomings of past teams worry this year’s squad as they try to carry some serious momentum into district playoffs next week.

“To me it doesn’t factor in at all,” Troy said. “We had a lot of guys graduate off last year’s team and a lot of people never expected us to be in the Central League championship game. So it’s a credit to everybody in that room, how hard they’ve worked, to make sure they’ve reached some goals.”

Now it’s the waiting Ridley who went undefeated in the regular season, getting a chance to skip through the semifinal round and see who would meet them in the final. The Raiders get a Pioneers squad they’ve beaten twice this year, 55-38 back in December at Ridley and then 50-44 at Conestoga on Jan. 20.

After seeing East Stroudsburg commit Brett Foster plus Julian Wing, Ryan Bollinger and the rest of the Raiders numerous times over the last few years, Caldwell and the Pioneers are plenty familiar with what it’ll take to reverse the recent tide.

“Playing them a lot, we’ve gotten used to each other--they know us and we know them,” he said. “We just need to bring a sense of urgency against them, that we deserve to be in this game. We can beat them.” 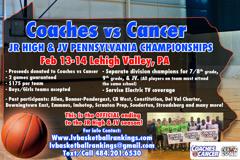