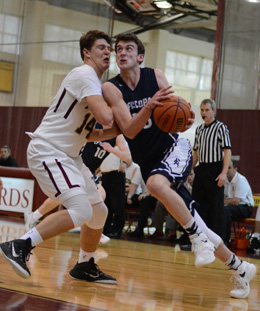 Nick Alikakos (above) scored 30 points in Episcopal's win, leaving him with 998 for his career midway through his junior season. (Photo: Josh Verlin)

As he went to shoot, he paused, just for a moment, then fired a pass down low to cutting forward Jermaine Rhoden for an easy layup.

That type of ball movement was the difference for the Churchmen, who pulled away to a 57-40 win at the Fords in a key bounce-back win for a team with Inter-Ac championship aspirations.

“We’ve been talking to them about taking our program, taking our team from good, taking them to great. And the same way, it’s just like our shot selection, head coach Craig Conlin said. “We could have a good shot, but if we move it one more, two more times, we could have a great shot, and with Sacchetta to Jermaine right there, it was perfect.”

Early on against Haverford, Episcopal (10-5, 1-1 Inter-Ac) looked like the team that lost 52-38 to Penn Charter in the league opener on Friday night at Philly U, when they shot 12-of-41 for the game.

In the first half on Tuesday, the Churchmen were a combined 5-of-22, including 2-of-9 from 3-point range, and held just an 18-17 lead on the Fords at the midway point.

“For some reason, (we were) still a little tight which probably carried over from Friday night, we weren’t making shots that we normally make,” Conlin said. “But once we were able just to settle in, do what we do, I knew we would be in good shape.”

The third quarter was the crucial one, an eight minutes that went 23-9 in favor of Episcopal and left them with a 41-26 lead going into the fourth. Many of those points came right at the rim, thanks to several assists by Sacchetta and a few by junior guard Connor Delaney.

Junior forward Nick Alikakos led the way with a 30-point outing, recovering from a 2-for-9 performance in the first half to make six of his eight shots in the second, along with nine of his 11 foul shots; for the game, he was 14-of-16 from the line.

The 6-foot-7 Division I recruit, who was being watched by assistants from American and Quinnipiac, is now just two points shy of 1000, a mark he’ll almost certainly eclipse on Friday night in a road game at Malvern Prep.

While Alikakos carried EA through the third and fourth quarters, it was a different junior who provided the initial spark in the second.

Jack O’Connell, a 6-6 wing, came off the bench and knocked down two 3-pointers in a two-minute stretch, turning a four-point deficit into a 15-13 advantage midway through the period.

“I was real proud of Jack O’Connell, comes in and bangs two 3s in a row, that was huge for us,” Conlin said. “He’s been struggling a little bit, and for him to come out and respond like that, I was so proud of him tonight.”