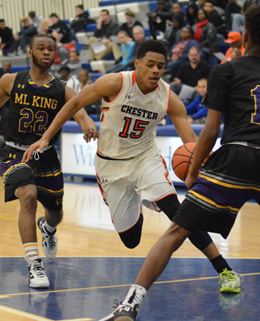 Chester's Marquis Collins (15) will be the third Chester product on the Delaware State roster next year. (Photo: Josh Verlin/CoBL)

Chester’s Marquis Collins has known for about a week that he wanted to join the Delaware State Hornets next season.

It was just a matter of waiting for the right time to announce his decision.

After hitting the game-winning jumper in a win over Penn Wood on Thursday night - a game in which he finished with 13 points, 10 rebounds and five assists - the stars seemed to be aligned for the 6-foot-7 wing forward.

With Collins’ announcement, it marks a third Chester Clipper who has made arrangements to call the Dover campus his home.

After also earning offers to Fairleigh Dickinson and Rider at the beginning of the season, the comfort of Delaware State proved to be key in distinguishing the Hornets from the competition.

“I want to go to a school where they needed me,” Collins said. “Mahir is a freshman there now, he knows what is going on and that they need a wing, need a wing bad, and that is really the main reason.”

Johnson, a 6-foot-2 guard scored more than 1,300 points in his four years in high school between Glasgow (Del.) and Chester, and was key reason in Collins’ decision to commit to DSU.

“He was talking to me just as much as the coach’s to be honest,” Collins said. “He really wants me down there, he is a like a big brother to me, I look up to him big time.”

The Hornets will be getting a talented wing that has a knack for crashing the boards and can really only be described as a complete play.

“It is always a beautiful thing,” Chester coach Larry Yarbray said. “This is something that he has been working for since he was a kid. So now he gets to move forward, doesn’t have to worry about it any more, can just settle back, relax and play basketball.”

Delaware State has not had a banner year by any stretch of the imagination. The Hornets currently sit with a 1-13 mark on the season. This includes losses to Penn, Temple and Michigan.

In the Hornets, Collins will be joining a squad that has featured a rotation of anywhere from 12-15 players that all see significant playing time for coach Keith Walker.

It is a deep, deep bench to say the least, one that Collins is eager to become a part of.

“I just really like what they are doing down there,” said Collins. “It is going to be hard at first to prove myself in the beginning. They know that I am a wing that does it all, not just a scorer so they are going to hopefully embrace me big time.”