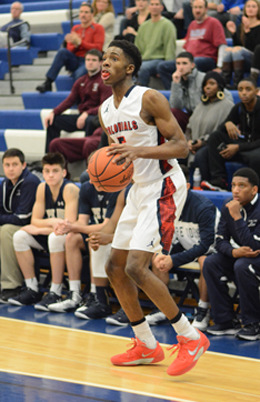 Xzavier Malone and Plymouth-Whitemarsh are 10-0 heading into a SOL showdown with Cheltenham. (Photo: Josh Verlin/CoBL)

Once the calendar turns to January, Fridays are the must-see night in the region when it comes of high school hoops. Every week for the rest of the season, we’ll be previewing the biggest events of the upcoming weekend:

Plymouth Whitemarsh/Cheltenham clash highlights Suburban-One slate
One of the top programs year after year in the Suburban One league, Plymouth Whitemarsh faces upstart Cheltenham in a game that will deliver some serious bragging rights in the SOL-American to the winner--not to mention a one-game advantage at the top of the standings.

Donofrio has led P-W to the state championship before, in 2010, and his teams always play with the utmost confidence that they can get back there again.

“We respect PW, it is a great program,” Cheltenham coach John Timms said. “In order to beat great programs, you have to have a great week, so that is what we have been preparing for all week...we are treating it like it is a playoff game.

“They are playing great, I think there is some great enthusiasm with those kids, I know coach Timms gets them playing with some great energy,” Donofrio said. “I know they are excited about what they can accomplish this year.”

This is new air for Cheltenham, who hovered around the .500 mark each of the last two seasons, as the current group of seniors matured and developed under Timms, now in his third year as head coach.

“Actually, it is like playing with house money,” Timms said. “You are playing an undefeated team at their place, so really the pressure isn’t on Cheltenham; we are coming in with two losses, they are expected to win.

“We are going up there with the thought that everyone expects us to lose, but us.” --Josh Verlin 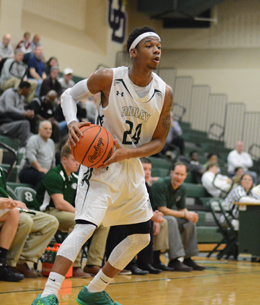 Julian Wing (above) and Ridley are the defending Central League champions, a spot Lower Merion is familiar with. (Photo: Josh Verlin/CoBL)

That is not the case this year: rather than Lower Merion sitting atop the Central League standings, it is their Friday opponent, Ridley.

“This is the first time that we have been ahead of them in the standings since I have been the head coach now,” said Ridley coach Mike Snyder, who’s in his fifth year as head coach. “It is different this year from where we usually are, we are usually trying to chase them from the top spot so we just gotta be ready to play.”

At 8-0, Ridley sits in first place in the Central League standings with Lower Merion, 6-2, just two games behind them in fourth place. While unusual, this intriguing Friday Night matchup is primed to define the state of the Central League moving forward.

“They are the team to beat,” Lower Merion coach Gregg Downer said of Ridley. “The Central League title goes through them. I have a lot of respect for their program and I think that Brett Foster is just a tremendous, tremendous high school basketball player.”

Foster, a 5-11 guard, has already committed to East Stroudsburg for next year. He is averaging 20 ppg and has really been a key cog in the Raiders success thus far. Fellow seniors Julian Wing (15 ppg, 6 rpg) and Ryan Bollinger (8 ppg) have played in plenty of big games themselves, including last year’s Central League championship win over Conestoga.

For Lower Merion, junior Terrell Jones leads the team in scoring, averaging 20 ppg. The 6-foot-4 junior guard has been the steady hand directing the Aces’ attack. He is helped by senior big man Jeremy Horn, who has been a force in the paint, averaging eight ppg and playing stellar interior defense.

“Yeah they seem to be playing a lot better now than they were in the beginning of the season,” Snyder said of Lower Merion. “They have been putting up a lot of points in the last five games, I think they are averaging 65 points in their last five games.”

Included in that five game stretch are impressive victories over J.P. McCaskey and York over the holiday break.

But both of those teams were District 3 squads, tough opponents without the meaning of a league game. For the Aces to beat Ridley, that would truly be a nice middle-of the season statement for Lower Merion.

“Going into their gym and getting a victory, we don’t expect it to be easy,” Downer said. “We have to play hard, treat it as a big game and a good chance to solidify ourselves in the top-four of the standings.” --Aron Minkoff 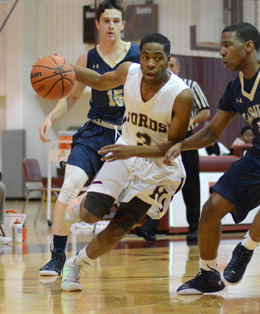 Inter-Ac opens league play at Philly U
Those who want a good look at all six teams in the Inter-Academic League have their first and only chance to do so in one building as they return to Philly U on Friday for their annual tripleheader to begin conference play.

The trio of games will begin at 4 PM when Penn Charter plays Episcopal, continues around 5:30 PM with Malvern Prep (8-6) and Springside-Chestnut Hill (5-5) and finishes off with a Germantown Academy vs. Haverford School matchup that’s scheduled to begin around 7 PM.

Episcopal head coach Craig Conlin is looking forward to getting back to Inter-Ac play, coming off a year in which his Churchmen (9-4) went 8-2 and finished a game behind GA for the league title.

The first test is against a 7-3 Penn Charter squad led by “new” head coach Jim Phillips, who also helmed the Quakers from 2000-2011, winning Inter-Ac titles in 2003 and ‘04. Though Penn Charter will have trouble limiting defending Inter-Ac MVP Nick Alikakos--the junior forward is averaging 25.5 ppg through 13 games--Conlin knows that his team can’t assume a 1-0 record or they’ll get caught in a trap.

The Haverford School (6-5) has been competitive under new head coach of its own in Bernie Rogers, who’ll be making his Inter-Ac debut after spending 14 years in the Catholic League at Archbishop Ryan. He’ll be guiding his Fords against the three-time defending champion Patriots, under the direction of 27th-year head coach Jim Fenerty.

“It will be a tough challenge, the kids are looking forward to it,” Rogers said. “We are excited to open up our league and looking to compete to the best of our abilities.”

The Fords are led by senior forward Jack Marshall, a 6-5 post who will be playing at Lafayette next year on the lacrosse field. They’ve also got a talented pair of sophomore guards, Kharon Randolph and Joe Dignazio, who do the vast majority of the ball-handling and distributing.

Germantown Academy (9-4) boasts a trio of talented upperclassmen, led by Penn commit Devon Goodman at point guard; a pair of 6-5 juniors, Evan-Eric Longino and Kyle McCloskey, bring athleticism and scoring ability to the wings. Goodman, a 5-11 senior, is leading the team at 19.6 ppg, with Longino (17.1 ppg) and McCloskey (12.7) behind him.

“McCloskey does a little bit of everything for them, obviously Goodman is a very talented point guard who can score and make other guys better,” Rogers said. “Longino...he can score a lot of different ways. I think their role players feed off their top guys and do a good job taking shots that are good for the team.” --Josh Verlin