St. Joe's momentum takes a hit in loss to VCU 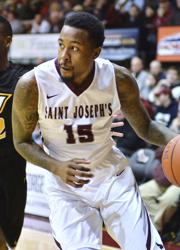 The St. Joseph’s run which put the Hawks up by 13 against VCU on Tuesday night was similar to the start of their 2015-16 season.

The Hawks were outperforming their opponent, Isaiah Miles was playing at an all-conference caliber level and they had a large chunk of momentum behind them.

St. Joe’s (11-3) was well on its way to its eight straight win and second consecutive Atlantic 10 victory with seven minutes remaining against the Rams. But as time fell off the clock, so did points of the Hawks’ advantage. And once it hit zero, VCU had won, 85-82.

“The hurt is really giving away a home game – a league home game,” St. Joe’s coach Phil Martelli said. “They have to be valued. We led for most of that game, but we didn’t finish it.”

No, the Hawks did not, and their seven-game winning streak ended in surprising fashion. It was all smiles for the St. Joe’s faithful with 7:11 left on the clock after DeAndre’ Bembry hit a free throw to put the Hawks up 70-57.

The shot marked the end of a 9-2 run that featured two 3-pointers from Miles – who finished with a game-high 31 points and added nine rebounds – but St. Joe’s froze up from the foul line and the field down the stretch.

The Rams, meanwhile, heated up. VCU hit 10 of its final 15 field goals, including its last seven attempts from the field. This happened all while the Hawks were struggling at the free throw line.

St. Joe’s went 9-for-19 (47.4 percent) in the second half from the charity stripe. Bembry alone was 4-for-9 on free throws in the game, which left a bad taste in his mouth despite a 17-point, seven-rebound showing.

Sharpshooting Melvin Johnson was the leader of VCU’s offense, scoring 25 points and going 5-for-12 from beyond the 3-point arc. But big man Mo Alie-Cox was really the catalyst during the late Rams’ run, scoring 10 of his 14 points in the final three minutes.

“We didn’t grind enough,” Martelli said. “Not like the silliness of ‘they worked harded’ but we didn’t grind enough. We didn’t put our foot down. It is what it is. We’re 1-1 in the league. We have a tough game on Sunday and we have to go back to work Thursday and not repeat this. There was a good turnout and good fan support, there’s a buzz about the team, and we have to make that a legitimate buzz.”

Martelli was right about the buzz. Even with students on break, there was still a crowd of 3,752 in Hagan Arena, almost all of which were on their feet after Miles knocked in back-to-back 3-pointers. And with the Hawks’ start, the buzz stretches outside northwest Philadelphia.

St. Joe’s received three votes in this week’s AP poll, and the team has put itself in the conversation as an NCAA Tournament contender.

Losses like the one the Hawks suffered Tuesday are ones that can come back to hurt on Selection Sunday, but they have eight weeks to make up for it. Inside the locker room after the loss, there was optimism from the St. Joe’s captain that would happen because the Hawks will always have one thing this season regardless of game outcomes: Maturity.

“We have a bit of an older team this year. So even though we lost I don’t think this is going to mess us up,” Bembry said. “We still have a great team. We feel like we still got better even though they won.”