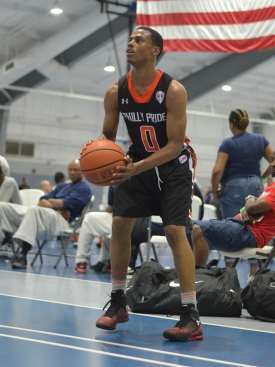 Imhotep coach Andre Noble would put his backcourt up against anybody’s across the city.

With junior Daron Russell and senior Jaekwon Carlyle, he has two players who can score, shoot, find the open man and run the Panthers’ offense. Both guards also have the ability to be Imhotep’s go-to option if need be.

On Thursday in a Public League battle at Martin Luther King, that’s exactly what Carlyle did.

With Russell stuck to the bench with four fouls, Carlyle made the Panthers’ offense go in the late third and early fourth quarters against the Cougars, and at one point he scored seven consecutive points for Imhotep. While King threatened, Carlyle made sure the lead never left the Panthers' side, and he was a big reason why they left the gym with a 71-54 win.

Carlyle, a Hampton commit, finished with a game-high 21 points and added four assists as Imhotep – the second-ranked AAA team in the state -- improved to 5-1 on the season and 3-0 in the Public League ‘A’ Division.

Last season, Carlyle did not have to do quite as much, as the Panthers had a handful of productive seniors and Russell averaged 16.4 points per game. This season, though, it’s a different story.

“He’s been talented since he was a freshman,” Noble said. “But I feel like he finally is realizing how to put everything together. He’s a Division-I basketball player, so that’s kind of what we expect for him.”

Added Carlyle: “I’ve been working on my game in the summer every day. I’m way more confident in my game. If there’s one defender on me, I know they can’t stop me. So then it’s attack, attack, attack.”

While Carlyle was the primary ball-handler when Russell went to the bench, the two were working really well together in the first half. The backcourt duo accounted for 17 of the Panthers’ first 25 points with Russell especially getting off to a hot start from beyond the 3-point arc.

The two have been playing together for quite some time, and are in the spotlight for Imhotep this season. They guard each other at practice, but have a great on-court chemistry. This showed in the first half when Russell tracked down a long rebound and gunned a full-court pass to Carlyle who was streaking to the basket and finished a layup while being fouled.

“We talked to (Jaekwon) and Daron two years ago when Daron was a freshman and Jaekwon was a sophomore, we envisioned this here,” Noble said. “We felt like we would be right where we are.”

Russell – a 5-foot-10 guard who has offers from La Salle, Temple, VCU and others – finished with 17 points and seven assists with both La Salle’s John Giannini and Temple’s Fran Dunphy in attendance. The Panthers also got a strong performance out of forward Jaquan Arrington, who had 18 points and a team-best eight rebounds.

While it was a 17-point game at the buzzer, King kept within striking distance for most of the game. The Cougars cut Imhotep’s lead to five points late in the third quarter, and then again at 50-45 early in the fourth quarter, but two players fouled out and Imhotep ran away with the lead.

King was led by Nasir Bell, who led his team with 19 points, and the Cougars also got 15 points from point guard Jabri McCall. The Cougars slipped to 2-5 on the season, and they are 0-3 in the Public League as they also have losses to Math Civics and Sciences and Constitution.

Meanwhile, Imhotep is looking like the reigning Public League ‘A’ champ, but Noble still sees room for improvement.