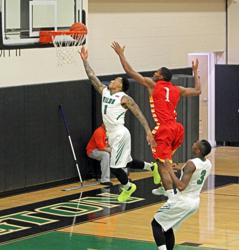 As Wilmington took its biggest lead of the night, Chestnut Hill coach Jesse Balcer took a timeout and laid into his team.

“We were playing soft,” Balcer said. “There was a way we wanted to play defensively and weren’t doing it. One of our strengths is that we have some guys who can really scrap, but we were getting real lackadaisical. We were relying on the fact some of our guys are athletic. We want athleticism and toughness and we were soft. So I gave them a few choice words about how soft we were playing and the need to change things.”

Change things the Griffins did. After that timeout, Chestnut Hill turned a six-point deficit into a 10-point lead and never looked back in an 81-69 CACC win on Wednesday night.

It was a 17-1 run for Chestnut Hill after the decisive timeout, as the team dominated on both sides of the floor. Tyaire Ponzo-Meek hit a 3-pointer to put the Wildcats up 52-46 when the timeout was called at the 14:50 mark. Wilmington did not hit another field goal for nearly eight minutes.

“I think we got a little bit individualistic, said Burke, who played and coached under Balcer at Chestnut Hill before landing the Wilmington job.

The Chestnut Hill run was helped by Edward McWade, a sophomore forward who scored a team-high 21 points on 8-of-14 shooting and also had 10 rebounds. McWade hit two 3-pointers, as well, when he had space on the perimeter. And when he didn’t, he found ways to get to the basket.

The Griffins, who moved to 4-6 and 2-2 in the CACC with the win, also got a combined 36 points from their undersized and over-productive backcourt. Their two leading scorers are senior Luke Dickson and sophomore Demetrius Isaac, both of whom stand at 5-foot-8. Dickson notched 21 points and had four points against Wilmington, while Isaac had 15 points and four helpers.

Ponzo-Meek dropped 21 points for Wilmington, while Brian Adkins and Omari Dill-Pettiford split 33, but the second-half scoring drought was the Wildcats’ downfall. The loss was the sixth in a row for Wilmington, which also fell to 0-4 in conference play.

The Wildcats are shorthanded as they’re without senior Shai Henry, a forward who averaged 7.2 points per game and tore his ACL early in the season. The team also is without transfer Manser Beauplan who has an achillies injury and guard Sam Sanders is ineligible until the next semester – which means he should be back on the court in a few weeks.

Burke, a second-year head man, also had some struggles in his first season as Wilmington started 0-7 last season and was 4-15 late in the year. The 2014-15 Wildcats finished strong, but Burke knows what the team did last year would work again perfectly this season.

“This is a different team,” he said. “Last year we had six seniors, this year we have one really playing on the floor. We have a lot of new guys who really weren’t in the position they’re in before. We don’t have a lot of leadership.”

Meanwhile, Chestnut Hill has almost matched its win total from last season when it went 6-20. Balcer said he did not expect last season to go how it did, but has renewed hope this year.

“Last year I thought we were going to be pretty good, but as it turned out, everyone in our league and everyone in Division-II basketball got so much more athletic than we were,” Balcer said. “I wouldn’t say we made mistakes, we weren’t athletic enough. But we talked about it, we added speed, we got more athletic and I think we can compete with pretty much everyone in the league.”