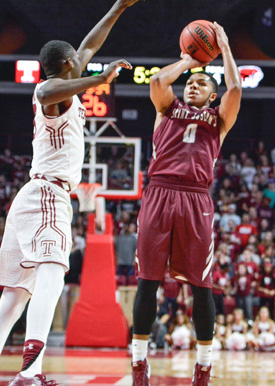 Lamarr Kimble went 3-of-4 from beyond the 3-point arc on Sunday. He could be a key in helping St. Joe's raise its 26 percent 3-point mark. (Photo: Mark Jordan/CoBL)

Across Philadelphia, fans and coaches alike have probably asked themselves the same question a few times so far this season: Why can’t my team shoot?

The first month of the season has been filled with much more iron than net for Philly 3-point shooters. As of Tuesday, out of the 351 Division-I teams in the country, three of the worst 69 3-point shooting squads are from the City 6.

- No. 12 Villanova, which used the long ball to go 33-3 last season, is shooting 30.4 percent from beyond the arc, and that number rose by nearly two percent after a strong shooting performance against La Salle on Sunday. Still, the Wildcats are in a tie for 283rd in the country in treys.

- Penn sits at 29 percent beyond the arc through nine games, a mark that ties the Quakers for 309th in the nation.

- St. Joseph’s is again struggling with treys, hitting just 26 percent of them in the team’s first seven games. The Hawks are 342nd in the country; only nine teams shoot it worse.

The median mark for Division I teams hovers a bit above 33 percent, and La Salle is the only team currently above that line in the city. The Explorers are hitting at a 35.2 percent clip from distance, and are the only Philadelphia team to crack the country’s top 200 in the category, checking in at 130th.

Temple hasn’t been too bad behind the arc, shooting 32.9 percent from distance. Meanwhile, Drexel has also struggled to hit the limited 3-pointers it’s attempted, and the Dragons are tied for 248th in the country with a 31.5 percent clip.

Temple’s and La Salle’s 3-point numbers are up from a season ago, but both Penn and Villanova have taken noticeable steps back in the department during the first four weeks of the 2015-16 campaign.

OK, it is December 15th, so there is plenty of time to turn these numbers around by season’s end. With Villanova, Penn and St. Joe’s, there are signs that say the percentages will go up. For starters, it’s hard to believe they’ll get any worse. 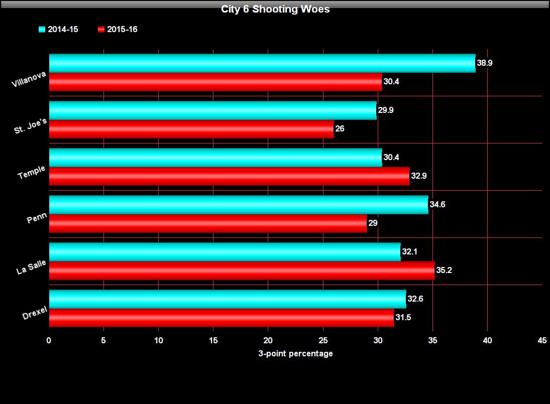 For Villanova, the team’s worst shooting performance of the season was on display for a national audience last week. Facing No. 7 Oklahoma in Pearl Harbor, the Wildcats struggled to hit much of anything and went 4-for-32 on 3-pointers in the 23-point defeat.

Villanova hit 38.9 percent of its threes last season – the 23rd-best mark in the nation – and resembled that team much more against La Salle, as the Wildcats connected on 13 of their 28 triples. For a team that has shot 280 3-pointers, the 10th-most in the country, Sunday might have been a turning point.

The early shooting woes of the Wildcats have received some national attention, with analysts, including stats guru Ken Pomeroy, saying not to worry. Those inside the Villanova locker room are saying the same thing.

“People can talk about what they want, we know we’re good shooters,” said senior Villanova guard Ryan Arcidiacono, who leads the team with a 41.5 3-point percentage. “I think we were just taking pretty difficult shots, contested when we still could have shot-faked, get in the lane. People can talk about that all they want but we know within Villanova what we are and how good of shooters we can be if we take good shots and step into them the right way.”

For Penn, the team his adjusting to being much more reliant on the three-ball under new coach Steve Donahue.

The Quakers hit 34.6 percent of their triples last season, but less than one-third of their field goal attempts were 3-pointers. So far this season, Penn has attempted 42.3 percent of its shots from beyond the arc.

The Quakers are using a lot of first- and second-year players and are without Tony Hicks, who made the most threes for Penn last season. Sam Jones is shooting 38.6 percent from beyond the arc, but no other Penn player has made even 30 percent of his 3-pointers. Like Villanova, however, Penn may be turning a corner, as the team hit half of its 14 triples in the second half against Temple last Wednesday and got four from freshman guard Jackson Donahue.

For St. Joe’s, it’s the second consecutive season the team has struggled with the long ball. Despite the poor 3-point percentage, the Hawks are 7-2, and got forward Papa Ndao, the team’s top 3-point threat, back from injury this month.

The Hawks shot 29.9 percent from distance last season, but even that mark is down nearly four percent this year. DeAndre’ Bembry, the team’s star player, has been productive this season even with a 5-for-33 (15.2 percent) 3-point mark. That number is bound to go up, and the Hawks also got a trio of treys from freshman Lamarr Kimble in Sunday’s win against Temple.

“I have no problem with the shots we’re taking,” St. Joe’s coach Phil Martelli said last week. “But you better take it and believe it’s going in, or don’t take it.”

Sound advice for everyone in the city.