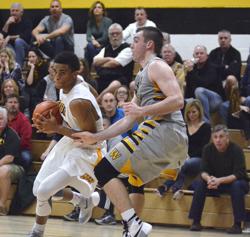 Both Archbishop Carroll’s Josh Sharkey and Archbishop Wood’s Tyree Pickron entered the 2015-16 knowing they would be doing a bit more for their respective teams.

Though the season is just two weekends old, both players are off to comfortable and productive starts, and they were fully on display Saturday evening in Archbishop Wood’s Richard Kelly gymnasium. The Catholic League rivals both won their games in the first annual Coaches vs. Cancer event hosted by Wood, with Sharkey and Pickron being the high scorers in both contests.

Sharkey had 20 points, six rebounds and five assists as Carroll defeated Parkland, 66-59. Then, in the finale of the four-game event, Pickron scored 22 points in Wood’s 66-46 beating of Central Bucks West. Here’s a closer look at each player’s start to the season:

Last season, Carroll was led by the high-flying Derrick Jones (now at UNLV) and also had 6-foot-10 Ernest Aflakpui (now at Temple) down low to keep post defenders occupied. This version of the Patriots is a little more centered on shooting, which is working just fine for Sharkey, a senior.

The 5-10 Samford commit is one of the best passers in the city and doesn’t have much of a problem finding open teammates when he’s driving, on the break, or when Carroll is running a set.

One of the biggest differences in Sharkey from last season is his improved jumper, which he showed off by hitting back-to-back shots during a 14-point first half against Parkland. He’s coupled that with his natural point guard tendencies, and it’s become quite a handful for opposing defenders.

“All summer I tried to work on getting my jumpshot consistent,” Sharkey said. “…I’m just trying to pick my spots (to score), though. If the defense is laying off, I know that’s my time to knock down a jumper. And if they’re playing uptight, it’s time to drive by and look for a teammate.”

Led by Sharkey at the point, Carroll is off to a 3-0 start with wins over Academy New Church and Abington in addition to Parkland. The Patriots were aided by John Rigsby’s 14 and Ryan Daly’s 11 points on Saturday, but their offense starts with Sharkey.

“I think what he’s done is expanded his game,” Carroll coach Paul Romanczuk said. “He’s gotten more cerebral and he knows when to score and when to dish to get his teammates involved. He just keeps getting better and better and I don’t know if I could ask for more from him and the start he’s had in these three games.”

Pickron proving self as scorer early in season

Prior to the season, Archbishop Wood coach John Mosco knew the biggest adjustment for Pickron, a sophomore, would be going from the Vikings’ fourth of fifth option to being one of their go-to guys.

His assessment after Saturday’s win: “(Pickron)’s been really good.”

The 6-foot-3 wing got going early with a few 3-pointers in transition and finished strong in the fourth quarter by getting to and finishing at the rim down the stretch. In addition to the 22 points, Pickron pulled down eight rebounds.

It’s not like Pickron has come out of nowhere, though. In his freshman campaign at Wood, he averaged double figures and scoring and even notched 14 points and 14 rebounds in the Vikings upset of Roman Catholic. Teams know who Pickron is, and he’s learning what it’s like to be more of a focal point in scouting reports.

“I noticed that teams have played me closer and tighter,” he said. “But during a full game, as long as you play, you’ll get open and get opportunities.”

Wood also improved to 3-0 on Saturday, winning its second game in two days after downing Reading on Friday night. The Vikings were without guard Colin Gillespie, who tweaked his ankle in the Reading win, but got 11 points from junior forward Matt Cerruti and 12 points and seven assists from point guard Tommy Funk.

The Vikings’ offense runs through Funk, a senior who’s committed to play basketball for Army, and he has a chemistry with Pickron – putting the sophomore in positions to make plays.

“Last year and this year, he always finds me,” Pickron said of Funk. “He’ll tell me where to go, he’ll know where to find me. He’s the reason I’m playing so good.”