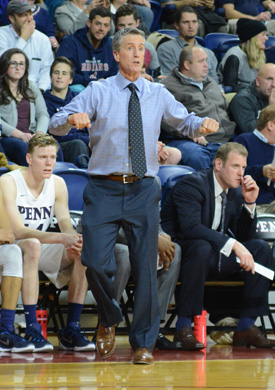 Steve Donahue (above) could not get the best of his mentor, Fran Dunphy, Wednesday night. (Photo: Josh Verlin/CoBL)

As Steve Donahue and Fran Dunphy chatted before Wednesday night's tipoff in a building they both know very well, they shared at least one sentiment.

“We’ve been at it for so long, we talked about it before the game, it kind of sucks,” said Donahue, the first-year Penn coach who spent 10 years serving on Dunphy’s staff between 1990-2000 when the later had the same job. “He’s such a great friend and a mentor.”

Wednesday’s game between Donahue’s Quakers and Dunphy’s Temple team was not the first time the two coaches had gone head-to-head, and it wasn’t their initial meeting in the Palestra. However, it was their first meeting as head coaches in the Big 5 – and that meant something for both mentor and mentee.

Dunphy got the better of his former student, as the Owls escaped the building with a 77-73 win that was decided in the final minute.

Wednesday’s tilt was the 14th time Donahue and Dunphy have squared off, and it was the 13th time Dunphy has emerged victorious. When Dunphy was still at Penn, where he notably spent 17 seasons, his team beat Donahue’s Cornell squad in all 12 of their Ivy League meetings. But in 2010, Donahue’s Cornell team knocked off Temple in the NCAA Tournament to get Donahue his first win in the friendly rivalry.

Dunphy got back on the winning side of it Wednesday thanks to a 22-point from Quenton DeCosey and a .500 shooting percentage from his Owls, who moved to 4-4. Obi Enechionyia (11 points), Jaylen Bond (12) and Josh Brown (10) also scored in double digits with Bond and Brown added 10 rebounds and nine assists, respectively.

Temple was up by 11 with 70 seconds left, but Penn still was able to make it a game. Antonio Woods scored nine of his 22 points in the final minute, and freshman Jackson Donahue hit one of his four treys with 50 seconds to keep pressure on the Owls.

Temple eventually converted from the foul line to ice the win, but it was a promising finish for Donahue’s squad, which shot 50 percent from distance in the second half.

“They never quit, never say die,” Dunphy said of Penn. “And I’m very proud of (Donahue) as a basketball coach, and probably even more as a man. He’s doing a terrific job and I see great things ahead for the Penn program.”

Dunphy gave Donahue a shot as a Penn assistant in 1990, but said that really had to do with some advice he got from Fran O’Hanlon, the current Lafayette coach. O’Hanlon, a Penn assistant at the time, knew Donahue and suggested Dunphy hire him to join the Quakers staff. That suggestion resulted in a head-to-head Big 5 meeting 25 years later.

“I think Fran O’Hanlon influenced both of us as basketball coaches,” Dunphy said. “But (Donahue) has his own way of doing things. I think they were in attack mode just about the whole game, and it seemed like they made every three down the stretch that they needed to.”

Donahue – who served as an analyst for ESPN last season -- also had tons of praise for his former boss, and he called Dunphy one of the most overlooked coaches in the country.

“The other thing I got to say about Dunph, and he probably hates this, is that he is so underrated as a coach nationally,” Donahue said. “To do what he’s done, he’s been to 16 NCAA Tournaments. That’s unheard of at the Temple/Penn level; nobody does that. The next closest at this level is about five, and that’s a great career. He’s done 16. He’s about to win 200 games at another school, that’s unheard of. I just don’t think he gets credit because he’s not a self-promoter.”

Donahue also credited the current team and said “they were better than us tonight.” But he’ll get another shot at them next season and another shot at Donahue – whether they both hate it or not.

“I think we both realized that this is why the Big 5 is great,” Donahue said. “It’s these kinds of things that tie us all together. We play in this building and we compete our tails off and when it’s over, it’s over.”