Penn vs. Temple: Wednesday's Big 5 matchup, by the numbers 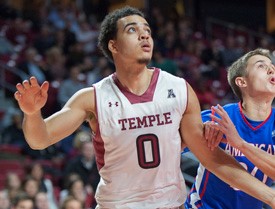 No Temple player on the current roster, including Obi Enechionyia (above) has ever lost to Penn. (Photo: Mark Jordan/CoBL)

Steve Donahue and Fran Dunphy face off for the first time tonight in a Big 5 matchup, as Penn tries to snap its three-game losing streak. The teams get things started at 7 p.m. in the Palestra. Here's our breakdown of the game, by the numbers:

2007
That’s the last time Penn beat temple. It’s been a nearly nine-year drought for the Quakers, as that 76-74 win came on Jan. 24 in the 2006-07 campaign. Penn outscored the Owls by 10 in the second half of that one in the Palestra, and Mark Zoller nailed three free throws with 1.4 seconds left to give Penn the win in  Dunphy’s first game against his old team. Dunphy and the Owls have owned the Big 5 matchup ever since, winning eight in a row.

16
Darien Nelson-Henry’s points per game average in three career contests against the Owls. The Quakers big man posted 17 against the Owls as a freshman and followed it up with a 19-point performance as a sophomore, then a career-high. Nelson-Henry is a combined 18-for-27 (66.7 percent) from the field in those three games against Temple, and he got his Big 5 season off to a roaring start in his season year by scoring a career-best 31 points against La Salle last month.

10
Seasons  Donahue spent on Dunphy’s bench at Penn as an assistant. These two coaches know each other – and the Palestra – very well. Donahue was an assistant for the Quakers and Dunphy from 1990-2000, when he left to be the head coach at Cornell. They went head-to-head as Ivy League foes while Dunphy was still at Penn, but tonight they meet for the first time in a Big 5 game.

2012-13
The last season in which Temple went above .500 in Big 5 play. The Owls have gone 2-2 in both of the last two seasons, but they should be favored to win three of their four Big 5 games this season, including tonight’s tilt. Temple fell to St. Joseph’s last season, a loss which came back to bite when selection Sunday rolled around. With four losses already, albeit against strong competition, picking up wins against Penn, La Salle and St. Joe’s (who they face Sunday), will be vital for the Owls’ NCAA Tournament hopes this season.

321
Where Penn ranks nationally in 3-point percentage (28.3 percent) entering Wednesday’s game. It’s been an issue for the Quakers all season, and has especially hurt during their three-game skid. Sam Jones will be the key from beyond the arc against Temple. Jones has the most attempts (65) and makes (25) of anyone on Penn’s roster, and he is shooting a respectable 38.5 percent from distance.