With strong defensive effort, Holy Family knocks off No. 2 SCSU 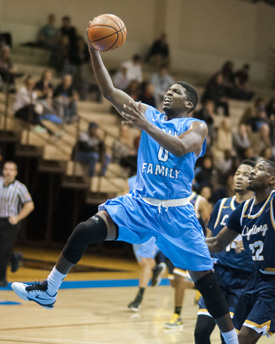 As R.C. Kehoe sat on a bus making a six-hour voyage from Manchester, N.H. to Philadelphia, he was ready to make a drastic change for his team.

Kehoe, the Holy Family coach, was ready to give up on his team’s signature style of play, which notably includes digging in defensively with a 2-3 zone. The Tigers had just lost two straight games during a weekend tournament, the second was a 15-point defeat to Merrimack in which Kehoe received two technical fouls and an ejection.

The coach of a team with nine seniors and high expectations was unsure of where his team was heading and if he should do something that could remarkably change its course. Looking at his personnel, Kehoe thought about letting the game be decided on the offensive end, with the focal point on shots instead of stops.

“For two days, I seriously contemplated not playing defense,” Kehoe said. “This is coming from a coach whose zone is arguably the best defense in the region over the last three years. But I wanted to throw it out the window.”

Kehoe, with the help from some assistants and some sleep, eventually talked himself out of the run-and-gun, offense-focused style. Instead, he told his players they need to buy in defensively. And if they didn’t, they weren’t going to play.

The results have shown.

Holy Family has allowed an average of 58.3 points per game since the Merrimack loss, and it was the defense Kehoe credited the most for the team’s 90-70 victory against No. 2 Southern Connecticut State on Monday night in Northeast Philly. The win moved Holy Family to 7-2 and was one of the most noteworthy victory Kehoe or any current player has had at the school.

SCSU, a recent powerhouse from Division-II’s Northeast 10 conference entered the game averaging 92.9 points per game on 46.4 percent shooting. The team did not get close to those numbers against Holy Family.

The Owls shot just 34.2 percent from the field and 21.4 percent from the 3-point line against the Tigers patented 2-3 zone. Their leading scorer, Michael Mallory, went 4-for-19 and 0-for-9 from distance on his way to 10 points – not even halfway to his 23.9 ppg season average. SCSU also had 18 turnovers, 10 of which came via a Holy Family steal.

“My biggest concern tonight was defense,” Kehoe said. “They have a lot of guys who can put it on the deck and score. I was concerned with if we could keep up the scoring with them. We got off to a good start, but I was more pleased with getting stop after stop after stop.”

Holy Family led for nearly all 40 minutes and did so convincingly. Six minutes into the game, the Tigers were up 20-9, and that lead ballooned to as many as 16 points in the first half.

In the first few minutes alone, guard Reggie Charles knocked down three 3-pointers, including one from about 35 feet to beat the shot clock. Isaiah Gans also scored in the first two minutes to put himself over the 1,000-point mark for his career.

“We’re usually a team that shoots a lot,” said forward Marvin Crawford who had a game-best 22 points. “So tonight, we knew we had it early and it boosted our morale a little bit, which felt like it kept us going even more.”

The Tigers drilled eight 3-pointers in the first half and shot 12-for-36 from beyond the arc for the game. Charles ended with 21 points, Gans had 16 and 10 rebounds and guard Eric Felming was also in double digits with 13 points – nine of which came on 3-pointers.

For a team that wants to lock down defensively, make no mistake, the Tigers are trying to move and trying to shoot when they have the basketball. Through nine games, they have attempted 310 of their 616 (50.3 percent) of their field goals from beyond the 3-point line.

When asked to sum up Holy Family’s style of play, Crawford had three words: “Threes and dunks.”

But Gans, who was seated right next to him, added one more aspect: “And defense.”

Yes, defense is still very much a part of the kind of team Holy Family is.