West Chester off to hot start as new pieces grow together 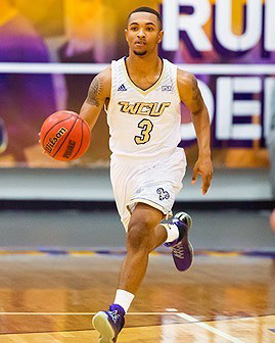 Malik Jackson (above) is one of two freshman guards who've helped West Chester to a 7-1 start. (Photo courtesy WCU athletics)

For a team replacing four major contributors from last season, West Chester had problems to start its 2015-16 season. Well, at least for the first 23 minutes of it.

In the Rams’ season-opener last month against Division-III Gywnedd-Mercy, they found themselves in a 26-point hole with 17 minutes remaining. But then West Chester came together and scored 56 points in the final 17 minutes to Gwynedd-Mercy’s 29 and grabbed a 94-93 victory.

“The first half, everyone was kind of doing their own thing,” senior Matt Wiseley said. “Second half, we buckled down and did what we needed to do. People were getting down on each other, so me and the other seniors and guys that have been here were doing our best to cheer everyone up and make a run.”

It’s been mostly smooth sailing since then for a young West Chester team that is playing like it has a few seasons together under its belt. The Rams won seven consecutive games to start the season and, at 7-1, are looking like one of the stronger teams in the PSAC.

They lost their first game of the season this past Saturday, falling 69-66 against Edinboro. That game, however, came less than 24 hours after West Chester came back from a 13-point deficit to beat Slippery Rock on Mike Wilson’s game-winning 3-pointer.

The 7-0 start was the best beginning to a season the program has had since the 2009-10 team won its first nine games in coach Damien Blair’s second year. The key to the success for this team so far, according to Blair, has been getting a lot of production from multiple sources. The Rams, who received nine votes in last week's Division-II coaches poll, have eight players averaging 6.6 points per game or more this season.

“We want to play as hard as we possibly can on the defensive end, and on the offensive end, we want to share the ball and work inside-out,” Blair said. “I think with that mentality, regardless of who we play, they had a certain approach they were taking to each game, and because of that, they’ve been successful.”

The key to that offense, which is averaging 81 points per game, is freshman point guard Matt Penecale. The Abington graduate has adjusted well to the college game, and is already a trusted ball handler and playmaker for Blair’s squad.

The 6-foot Penecale averages a team-best 34.4 minutes per game, scores 6.6 points a game, but his biggest asset is his passing. Penecale’s 44 assists are 28 more than his closest teammate (Wiseley) and he had eight helpers in four consecutive games during one stretch.

“Penecale is the catalyst to all that,” Blair said referencing his team’s offense. “He doesn’t care about himself offensively. He’s always trying to set somebody else up, so if I had to pick one big (reason) that helped us through those first seven games, it’d be him.”

The bulk of West Chester’s scoring is coming from Wilson (15 ppg), Malik Jackson (15 ppg) and Wiseley (13.9 ppg). It’s a lot different than last year as Wilson and Wiseley combined to average 17.2 ppg a season ago and Jackson was still playing high school basketball at Penn Wood.

The Rams don’t play again until they visit Bloomsburg on Dec. 16 as they try to push their conference record to 6-1. In the meantime, Blair wants his team to get some rest and focus on cleaning some things up.

Even with the recent loss to Edinboro, the season is looking up for West Chester. It’s still a young team, but one that grew up a lot in its first game, and first month of the season.