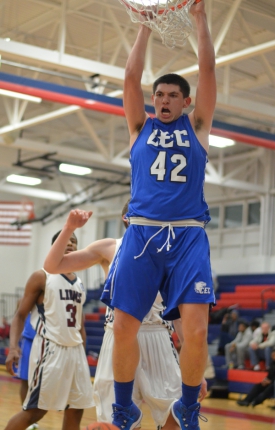 (Ed. Note: This article is part of CoBL's "Prepping for Preps," our series of articles previewing area high school teams for the 2015-16 season. For the complete list of schools previewed so far, click here)
~~~

Conwell-Egan won its first playoff game in 51 years and captured the first ever boys’ basketball state title in March. Rightfully so, it was a big deal for the Eagles.

It was talked about at the school, in the area and among teammates for the following few weeks. But coach Frank Sciolla has let the fanfare surrounding that unforgettable title run die down as the 2015-16 season is about to begin. The Eagles can’t win the 2015 state championship again in 2016.

“It was exciting for that month afterward. But once that settled down, it was the same thing that I’ve done for the course of my career, and started to prepare for next year,” said Sciolla, who is entering his third season at Conwell-Egan. “That was last year. I think we celebrated it throughout March and into April and then it was on to taking the next step, which is ‘How far we can go within our league?’ ”

That league is the ultra-competitive Philadelphia Catholic League, and Conwell-Egan has a shot to finish near the top of it. Conwell-Egan’s returning talent features two players who received all-state honors from the PIAA last season in LaPri McCray-Pace and Vinny Dalessandro.

The Eagles did lose reigning PIAA Class AA Player of the Year as Stevie Jordan transferred from the school, but their talent – led by McCray-Pace and Dalessandro – was still enough to have the team be ranked second in the state to begin the season.

Without Jordan, or graduated starters Chase Kumor and Sean Kelly, there will be more on the plates of McCray-Pace and Dalessandro this season. And so far in practice, Sciolla has liked what he’s seen from the pair of seniors.

“They both matured in different ways, and they both have different styles with how they interact with people,” Sciolla said. “Lapri is very vocal and Vinny is more quiet, but is becoming more assertive with how he is with the guys. Both guys are tremendously experienced, they have to have 80 varsity games under the belt. They help out at practice and can talk about what is expected in the locker room and the hallway.”

McCray-Pace is the Eagles’ leading returning scorer, as he averaged 11.4 points per game last season. The 6-foot-4 wing had a team-best 22 points in the PIAA Class AA title game against Alquippa, and can create matchup problems for some opponents.

Dalessandro will again be the Eagles’ go-to presence in the post. The 6-7 forward posted 10.5 ppg last season, and that number will likely increase in the upcoming campaign. There’s one area in particular where Sciolla would like to see those points come from.

“For Vinny, this is a really big year to put pressure on other teams and to get to the foul line,” the coach said. “A huge focus for us is to have him attack the rim and double his free throw attempts from last year.”

Surrounding McCray-Pace and Dalessandro will be a lot of players filling new and larger roles in 2015-16, including junior Kar’ron Johnson, who will soak up a lot of the minutes Jordan left in the backcourt. Johnson is a 5-11 point guard and Sciolla said “he understands what needs to be done, and he knows how to play.”

The Eagles added James Leible from St. Joe’s Prep. Leible is 6-4, and though he’s been a post player for most of his career, Sciolla said the team plans to use him more on the perimeter.

Conwell-Egan will also get valuable minutes from  James Thompson, Daniel Green and Darien Simmons, according to Sciolla.

Sometime in the next month or two, Conwell-Egan is going to have a ring ceremony to honor its 2015 title team, and Sciolla expects that to rehash some good memories. It will be a special occasion, but Sciolla is more focused on improving his team’s 8-5 PCL record from last season and hopes to raise another trophy in Hershey in about three months.

“People celebrated that and we had some unbelievable experiences, and that’s great,” Sciolla said. “But honestly, we don’t really talk about it. We know what we have to do going forward.”