St. Joe's vs. Villanova: Five things to watch in the Holy War 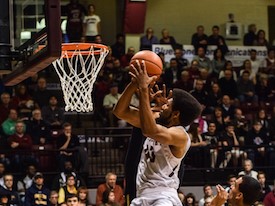 The 73rd installment of the Holy War will take place Tuesday night at Hagan Arena as No. 8 Villanova visits St. Joseph’s.

Villanova has won five of the previous six meetings, and both sides are off to solid starts through the first three weekends of the 2015-16 season. The Wildcats are a perfect 6-0 and won the NIT Tip-Off Championship against Georgia Tech on Friday. The Hawks, meanwhile, are 4-1 with their only loss coming to Florida on a neutral court.

Here are five things to watch when the rivals square off Tuesday:

Villanova has won its last two games against St. Joe’s by a combined 58 points, but this meeting doesn’t seem like it will be that much of a lopsided affair.

Villanova is ranked in the top 15 for third consecutive time against St. Joe’s, and again brings a team that could challenge for a national title. The difference this year is with the Hawks.

What the Hawks boast this year is a roster that features six players averaging 7.8 points per game or more, including senior big man Isaiah Miles, who is putting up 17 points and 7.4 rebounds per game. St. Joe’s also, has potential All-American DeAndre Bembry (14 ppg, 6.4 rpg), an experienced senior in Aaron Brown and an improved James Demery.

“There’s no revenge. We feel the fans’ agony, I get all that. But we’re not going to clear that up in 40 minutes on Tuesday,” Martelli said. “We’re coming here to compete, and we’re coming here with a plan that we believe in to win – not just to compete and say ‘good try, fellas.’ ”

One aspect Jay Wright notices when he studies the Hawks is that they match up well with Villanova.

“Their guards are really big. Their forwards play out on the perimeter and are very skilled, that’s a tough match for us,” Wright said. “They’re a very intelligent defensive team. They’re a very good 3-point percentage defensive team, and that’s where we make our living. So the matchup is not an easy one for us.”

Four of the St. Joe’s starters are 6-foot-5 or taller and the team also brings in Demery off the bench, who is 6-6 and a capable defender. As Wright noted, St. Joe’s hold its opponents to a 27.3 3-point percentage – though the Hawks shoot it even worse (23.7 percent) from beyond the arc.

Going the other way, Martelli noted every player on his team has an “eye-to-eye” matchup against Villanova, which includes Bembry on Josh Hart – the Wildcats’ leading scorer.

3. How the Hagan Arena crowd impacts the game.

It’s going to be a packed and boisterous house Tuesday night in Hagan Arena’s third Holy War. It’s also the first true road game this season for Villanova, which has gone 4-0 at home and 2-0 at neutral sites.

“That’s why these records early in the season can be deceiving, because we’ve played home games and neutral court,” Wright said. “This is real. When you go into a really tough environment, that shows you what kind of team you are.”

Brunson played his best basketball in a Villanova uniform during the Wildcats’ two wins in the Barclays Center last week.

The touted freshman dropped a season-best 18 points on Stanford and followed it up with 13 points on 5-of-8 shooting in Friday’s win over Georgia Tech. Of course, he still has aspects of his game to work on – for instance his 29.2 3-point percentage – but Wright seemed pleased with how Brunson’s first two weeks have gone.

“It can real tough for a freshman early,” Wright said. “I remember a few years ago we played Kansas and Andrew Wiggins real early, and he really struggled. But you could tell he was going to get better and better. I think Jalen, he’s struggled with a few things, but I really think he’s handled everything well so far.”

The point guard will have his hands on the ball a lot Tuesday with thousands of screaming fans trying to make life difficult for him. The game should be the most telling so far of Bruson’s brief career.

5. Potentially the most memorable Big 5 game of the season.

Villanova is going to be favored in every Big 5 game it plays this season, and the Wildcats are the only team in the city that is a shoe-in for the NCAA Tournament.

Temple is widely looked at as the second-best Big 5 team, but Villanova won’t face the Owls until Feb. 17 in the Liacouras Center, a game surrounded by conference play. On Tuesday, there will be no concern over NCAA Tournament resumes or seeding – just two teams and two fan bases who don’t like each other very much going head-to-head.

“They’re a good a team as we’re going to see,” Martelli said. “You mix in the emotional part of a Philadelphia game and we have to learn, we have to grow and take that on.”

It will be Ryan Arcidiacono’s final game against St. Joe’s. It’s potentially the only collegiate meeting between Bembry and Brunson. It’s the chance for one team to record a monstrous upset and for the other to send a reminder of who owns the rivalry of late.

“This is my 15th year, and every time I walk in on the court in this game, it reminds me of walking in when I was a kid to the Palestra,” Wright said. “I kind of have to pinch myself and remind myself that I’m in it.”