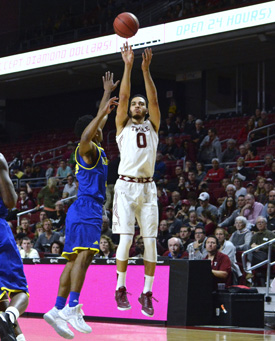 Obi Enechionyia constantly worked on his outside jumper in the offseason with one goal in mind.

“I want to be the shooter,” the Temple sophomore said Sunday, referring to his desire to be the Owls' go-to guy on the perimeter.

On Sunday, Enechionyia played the part extremely well. The 6-foot-9 forward scored a team-best 16 points and hit four 3-pointers on six attempts – the most triples in any game of his young Temple career – as the Owls cruised to a 69-50 win against Delaware in their home opener.

“This year I planned on being the best shooter on the team,” Enechionyia added. “That’s really what I was focused on in the offseason, becoming more of a threat from outside.”

The 16 points, which came on 6-of-8 shooting as Enechionyia did not miss from inside the arc, were one off a career high and the most of the season for the Springfield, Va. native. Enechionyia has established himself as an offensive weapon for Fran Dunphy’s team in the season’s first two weeks, and his 12 ppg average is second on the team behind Quenton DeCosey’s 14.2 ppg.

The forward also leads Temple with a 47.4 3-point percentage and has more triples (nine) than any teammate, despite missing the team’s first game with a right ankle injury.

“Obi is a very valuable commodity to us,” Dunphy said. “You really have to go out and guard him, so he really stretches the floor. And then when he shoots the jumper, I feel very confident that it’s going to go in.”

He did have a bit of a scary moment against the Hens. Late in the first half, he and Delaware’s Chivarsky Corbett were jostling for a rebound and Enechionyia landed funny on that same right ankle. Fortunately for Temple, Enechionyia was able to return to the game minutes later, while Corbett suffered a season-ending ACL tear on the play.

Enechionyia said his ankle was almost 100 percent entering the game, but that took a step back when he came down on it wrong. But he doesn’t see the ailment bothering him heading into the Owls’ Wednesday tilt against Fairleigh Dickinson.

“I’m not sure if I landed on him or what happened,” Enechionyia said. “But I came down and twisted it again. It wasn’t too bad, I could still play.”

That was obviously welcomed news for Temple, and 11 of Enechionyia’s points came in the second half. He also scored six of them in less than a minute as he hit 3-pointers on back-to-back possessions, the second of which put Temple up by 15 and sealed the game.

“You won’t believe that the scouting report was to not let him have any open threes,” Delaware coach Monte Ross said. “We wanted to make him bounce the ball and not give him any open looks. …He’s a player who looks like he’s really come into his own this season. I see him rising up with a lot of confidence.”

Enechionyia went just 12-for-43 (27.9 percent) from beyond the arc in his freshman season. So, like Ross, opposing coaches are going to see a different forward who can stretch the floor with an efficient jumper.

If Enechionyia keeps playing like he has in the first few weeks, he’ll solidify his goal of being the best shooter Temple has. Dunphy is pleased to have a player with that skill set, but he’s challenging the second-year player to keep growing.

“He’s shooting it very, very well,” Dunphy said. “The next step is to be the best defender he can be, and he has to get more rebounds for us. He got six today, but I think he can do better at that. I think it’s always a learning experience for the guys who are on the young side.”