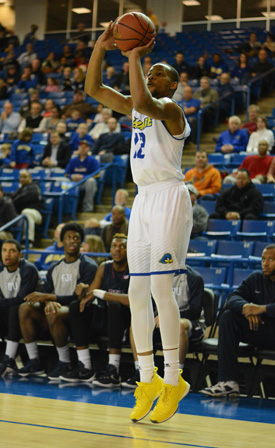 It didn’t look good when Delaware sophomore Chivarsky Corbett landed awkwardly during the first half of Sunday’s game at Temple. A short while later, Blue Hens coach Monte Ross confirmed the injury was at bad as it seemed.

Corbett tore his ACL in the 69-50 loss to the Owls, and the wing will be out for the season. He entered the day as the team’s second-best scorer (13.2 points per game) and is the second Delaware player to tear his ACL in the last two months, joining Eric Carter.

“I had one ACL (injury) in nine years, and I’ve had two in the last however many weeks,” Ross said.

Corbett went down late in the first half while fighting for a rebound on the offensive glass and was writhing in pain on the floor before trainers looked at his right knee. Temple went on a run after Corbett left the game, and Delaware will need others to help fill the void of the second-year player who looked poised for a breakout campaign.

Corbett played mostly at the 3 position and his absence leaves the Blue Hens without depth in the backcourt. They have starters Kory Holden and Cazmon Hayes, but without Corbett, there will have to be more court time for sophomore Anthony Mosley – who played 28 minutes against Temple.

“We have three guards now. I’ll petition the NCAA, I don’t know if they’ll listen, to cancel our season," Ross said jokingly.