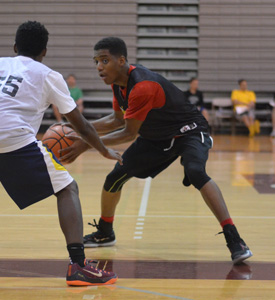 Nasir Bell (above) and King made it to the 2015 PIAA Class AAAA championship game. (Photo: Josh Verlin/CoBL)

Sean Colson planned on welcoming a few new pieces to his Martin Luther King for the 2015-16 campaign. One late addition for the upcoming season was more unexpected than the others.

Point guard Jabri McCall will play his senior season at King. McCall originally planned on transferring to Academy New Church, but due to some complications, he’s back with his old team leading up to the season. It’s good news for Colson and the Cougars and bad news for the rest of the Public League.

“I don’t really know the whole situation with why he transferred back, but I was happy to get him because he’s one of our players anyway,” Colson said. “He’s a big part of our team. He just came back, and getting him acclimated with our team didn’t really take too long because he’s been one of our captains and better players for the last two years.”

McCall, King’s second-leading scorer last season (12.8 ppg), will hope to lead the Cougars on another run in the state tournament. The Cougars went 23-9 last season and made it the PIAA Class AAAA title game last season, where they fell to Roman Catholic. With McCall, some new faces and other players who are a year older, Colson thinks his team has a chance to do so.

King lost leading scorer Sammy Foreman (14.2 ppg) and a handful of other seniors who played valuable minutes last season, but Colson has plenty of capable players ready to fill those roles.

There’s 6-foot-2 wing Nasir Bell, a part-time starter for the Cougars last season who will see his time on the floor increase this year. Bell’s size makes him versatile, and Colson noted the senior (who averaged 6.5 ppg last year) had added to his offensive game in the last few months.

“Nasir kind of had a small role to start then he became our glue guy last year,” Colson said. “I can play him at the '3', at the '4' when we go small. He’s just a grinder, really good player. He used to just be a shooter and a defensive player, but he’s added a lot of playmaking skills.”

Another returning member on King’s roster that will get increased usage this season is 6-7 big man Rasool Samir. Colson said he expects Samir to be the team’s starting center after waiting his turn the last few seasons. Said Colson: “Now he’s the guy who is going to bring it. He’s been playing great, and I’m expecting a big year from him.”

Colson also has a few newcomers he expects to make an impact this season. Among them are guard Qadir Burgess, and forwards Jakwon McQueen and Nahim Lee.

Burgess transfers to King from Bishop McDevitt, where he was the second-leading scorer a season ago (11.8 ppg). He gives the Cougars another scoring option in the backcourt, and Colson said he expects him to start this season.

McQueen, who comes over from Philadelphia Electric and Technical, will aid Samir in the post, likely off the bench though Colson said he could start for “70 or 80 percent of the teams in the city.” Lee, meanwhile, played last season at West Catholic and, at 6-6, gives MLK more size and versatility.

Colson said he also has a few younger players who should see the court this year, but he didn’t want to mention names because “nobody knows about them yet.” MLK has depth, but what Colson is most optimistic about seems to be the way the Cougars can perform at offense and defense.

“I like this team because we have a lot of two-way players,” Colson said. “In the past maybe we had someone who could really score, but the defense was a little suspect. Or we had a kid whose defense was good, but he couldn’t score as much. I feel like this year we have a lot of guys who can get it done on both ends of the floor.”

With their point guard back and some new talent around him, the Cougars are definitely a threat to win their second Public League title in three years. They came up short against Imhotep in the Public League playoffs last year in a game Colson said the opponent “took from them.”

King wants to get one game farther in the league playoffs this year and also wants to return to the state’s big stage in Hershey.

“The three years I’ve been here, we don’t know anything but the semifinals or championship in the Public League,” Colson said. “And then in the states, we want to go as far as we can.”