With motivation from mentor, Demery starting season on right note 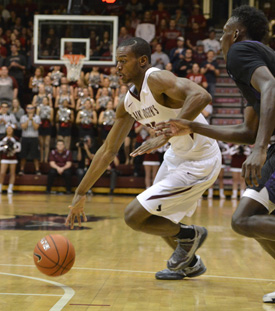 On Saturday, St. Joseph’s lone day off of opening weekend, there was still some basketball being played at Hagan Arena.

There wasn’t anyone in the seats, but you could hear some yells on the Hawks’ home court. They were directed at James Demery, and came from his former AAU coach and current mentor, Jeff McInnis. McInnis, a former North Carolina standout and NBA player, was in Philadelphia last weekend and spent a lot of time with Demery on and off the court.

Demery, a sophomore wing, is coming off the bench this season, and in a new role, his athleticism on both ends of the floor can be a key for a St. Joe’s team showing a lot of upside. Both Demery and Phil Martelli credited the time with McInnis for the his best game of the season, which came in Wednesday’s 89-67 rout of Buffalo.

Demery said he and McInnis worked on his shot as well as his confidence during their time together – both were evident against Buffalo.

Within 30 seconds of checking in, Demery knocked down a 3-pointer on his first possession that was part of the Hawks’ 17-0 first half run. He ended the game with a career-best 13 points on 5-of-10 shooting and added six rebounds in 16 minutes.

“It was a family time and also a business time,” Demery said of working with McInnins, who spent 11 seasons in the NBA. “He got on me to stay focused. I got sidetracked a little bit, and his influence on me – we’ve been working together since I was a kid playing AAU ball – has been great. Once I saw he was getting on me, along with coach Martelli, I realized I had to step up and play my role.”

The relationship between McInnis and Demery started when Demery was in eighth grade, and blossomed when the 6-foot-6 wing played for him on the highly successful Team Charlotte AAU team. The weekend visit from McInnis appeared to have come at a good time for Demery, as he transitions to a role off the bench this season.

Demery started 29 games last year, scoring 6.7 points per game but he never found his stroke. The Williamston, N.C. native shot 36.6 percent from the floor, a lousy 17.5 percent from beyond the 3-point arc and he posted just a 56.4 percent mark from the free throw line.

It’s a small sample size, and Demery has still struggled from charity stripe so far (he’s 3-for-11 through three games), but he has hit 55 percent of his field goal attempts, and looks like a more self-assured player this season. That also comes from the defensive side of the floor, where Demery has always been able to make an impact in his basketball career.

Martelli said he wants to get to the point where Demery and Hawks all-conference forward DeAndre Bembry are arguing about who will guard the other team’s best player. It seems like they’re on the right track.

“(McInnis told me to) have more confidence and to do what I’m supposed to do on defense,” Demery said. “I’m a good defender, I know that. And him just believing in me, sometimes it takes that, someone close to you, to motivate you.”

Martelli and Demery are hoping that motivation lasts through the season. Demery may not be hearing his name called at the start of games right now, but he will be a vital piece if St. Joe’s is going to go on a postseason run this season.

“I can’t teach him like it’s training wheels. He’s on the big boy bike, Martelli said.