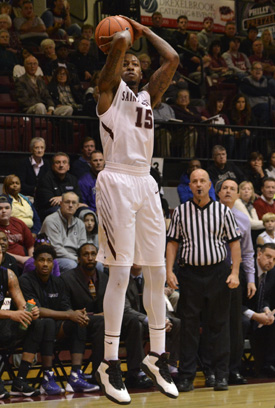 Isaiah Miles (above, against Niagara on Friday) had 24 points and 14 rebounds in a win over Buffalo on Wednesday night. (Photo: Mark Jordan/CoBL)

Isaiah Miles woke up Wednesday thinking it was going to be a good day. When he took the court against Buffalo hours later, he made sure of it.

“For some reason, when I woke up, I just felt happy,” said the senior forward. “Then when that first bucket went in for me, I thought to myself ‘It’s going to be one of those games.’ I was hoping to ride that wave and keep it up.’ ”

It was indeed “one of those games” for Miles, who tied career highs in both points (24) and rebounds (14). He led the charge as the Hawks picked up their third home win in six days, dismantling Buffalo, 89-67, on Wednesday night at Hagan Arena.

Miles was one of four St. Joe’s players who scored in double figures, and Phil Martelli’s team posted its highest point total since scoring 96 against Iona on Dec. 28, 2012. The Hawks shot 47 percent from the field, and Miles was even better, hitting seven of his 11 field goal attempts, two of his five 3-pointers and all eight of his free throws.

It was the third career double-double for the Baltimore native (and second of the season), and in three games, Miles is the surprising St. Joe’s scoring leader with 17 points per game. Miles said he lost 20 pounds in the offseason, and both him and Martelli credit it for helping him to his terrific start, which also features a 9.3 rebound per game average.

“He just looks like a different player because of the weight loss,” Martelli said. “He’s a senior in practice, he’s a senior in the locker room. He takes those charges in practice. He sticks his face in there. Fourteen rebounds and we’re undersized. I’m delighted for him. Seniors can go out one of two ways: Been there, done it and kind of take my way through 30 games. Or you put it down. And for three games, he’s put his foot down.”

Added Miles: “I feel faster down the court, I feel like I’m jumping higher. I’m just working on keeping (my weight) down now.”

Miles had seven of the Hawks’ first 12 points, and was a large part of an early 17-0 run, which took any hope away from the Bulls of pulling a road upset. The push gave St. Joe’s an early 19-5 advantage, but it was missing one main character: DeAndre Bembry.

The Hawks star did not even attempt a shot in the first eight minutes and was held scoreless until he converted a layup while getting fouled with 10:13 left in the first period. The bucket was a milestone for the junior wing as it gave him 1,000 career points in just his 68th career game at St. Joe’s.

When asked about the mark after the game, Martelli was quick to point out other bright spots of Bembry’s body of work.

Bembry was part of a tight defensive effort that held Buffalo to a 24.3 percent shooting clip in the first half and 30.4 field goal percentage in the game.

But it really was the Hawks offense that stood out, as it has in all three of their first-week victories. St. Joe’s looks nothing like a squad that averaged 61.7 points per game last season. Through three contests, the team has posted 81.3 points per game.

Against the Bulls, the Hawks got 13 points off the bench from James Demery, 12 from Shavar Newkirk and nine apiece from guards Aaron Brown and Lamarr Kimble. St. Joe’s is getting production, and getting it from multiple sources – both aspects make Martelli happy.

“It looks like basketball,” the coach said. “I get what happened (last season). It was people saying ‘Are they going to get to 60?’ We had 12 games under 60. …There’s nice confidence, nice feeling with the group. They’re good people and I’m glad good things are happening to them this week.”