La Salle gets through first week undermanned, undersized and undefeated 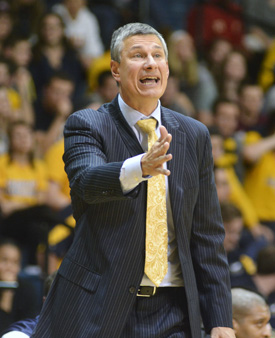 John Giannini only had two scholarship players on his bench for the first two games, but La Salle is 2-0. (Photo: Mark Jordan/CoBL)

For a game when he again only had seven healthy scholarship players available against a capable opponent, Tuesday night was about as stress-free as John Giannini could have hoped for.

That’s because La Salle lit up the home side of the scoreboard with points and barely any fouls in a 73-60 victory against Rider. The Explorers had a 10-point lead for the duration of the second half and were called for just 10 fouls in the entire game – something unheard of in the first few days of new NCAA rules.

La Salle’s five starters all played at least 33 minutes, and no Explorer was called for more than two personal fouls. It made the game much easier to manage for Giannini than the Explorers’ season-opening win against Towson when they also had seven healthy scholarship players, but two fouled out and another was called for four fouls.

The Explorers sat in a 2-3 zone for a majority of the game, and the 12th-year head coach credited it for allowing his team to be effective without fouling.

“If someone would’ve told me we’d play as much zone as we have in the first two games -- that was not the plan two weeks ago,” Giannini said. “But sometimes you have to adjust, and our kids are playing it hard. They’re quick, they get around and it’s kept us out of foul trouble and kept us in the game.”

La Salle had 24 total fouls against Towson on Saturday, which led to 23 points at the free throw line for the Tigers on 33 attempts. Tuesday night was a different story.

The Explorers had just three fouls after halftime, and while Rider shot 46.4 percent from the field, the Broncs were 4-for-19 (21.1 percent) from beyond the arc and got to the foul line just five times. Though zone defense isn’t La Salle’s most practiced approach, the Broncs still committed 15 turnovers – 10 in the first half.

“We just came out and played our defense,” said Jordan Price, who led all scorers with 28 points. “We know that we can’t touch them, so that’s about it.”

The lack of fouls and La Salle’s ability to slow the game down in the second half with a big lead even allowed Giannini to use his bench sparingly as first-year forwards Yevgen Sakhniuk and Dusan Majstorovic played 10 and seven minutes, respectively.

The Explorers are without three scholarship players who are sitting out the season due to transfer, but also have injuries to a pair of key players in forward Tony Washington and guard Karl Harris – both missed the first two games because of concussions.

Harris was close to returning Tuesday night and suited up for the game. But the freshman was ultimately unavailable as Giannini said: “At the 11th hour, when we were getting dressed, our trainer said ‘I think he’s trying to be tough, but in my opinion, I don’t think he feels up to it.’ ”

Meanwhile, Washington was not on the team’s bench for the second consecutive game. His absence hurts La Salle more just because the team is already thin and inexperienced in the front court.

Giannini was unsure if either of the two players would be ready for their next game, but the Explorers have five days off before facing Lafayette at Tom Gola Arena on Monday.

For now, the Explorers are 2-0. They were undermanned and undersized in the first week of the season – and also undefeated.

“We beat veteran teams that had a lot of guys coming back, and teams, in my opinion, that are going to have good seasons,” Giannini said. “So I’m thrilled to get through those two games with a short bench. And a short team.”