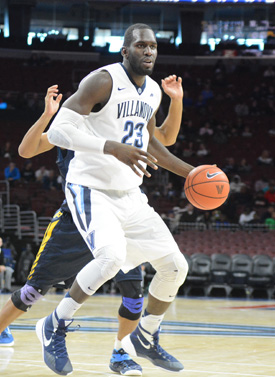 Every day during the season on which there are games featuring the 10 Division I teams that CoBL features, we’ll have a Tipping Off running bright and early, letting you know everything you need to know about the matchups.

As always, we’ll start with a wrap of the previous day’s action, followed by a look at the complete slate; as always, thanks to KenPom’s awesome site for his predictions--though keep in mind this early in the season, his predictions aren’t quite as reliable:

The Skinny: The second Dave Leitao era at DePaul got off to a good start, as the Blue Demons downed Western Michigan 69-63 in their opener on Saturday. Leitao was able to led DePaul to 20-win seasons in 2004-05 and 05-06, a mark the program has hit just once since. What Leitao has to work with is a backcourt with great size, including 6-6 junior Billy Garrett Jr., 6-6 senior Myke Henry, 6-5 junior Darrick Wood and 6-6 freshman Eli Cain. Garret Jr., who averaged just north of 12 ppg each of the last two games, had 18 in the opener. Penn State got 15 points from sophomore guard Shep Garner and 13 from Brandon Taylor in beating VMI in the opener; freshman guard Josh Reaves had a stat-stuffing game with six points, five rebounds, three blocks and two steals.

The Skinny: La Salle pulled off a gritty win in its season opener, toughing out a 78-76 victory over Towson despite having to play the final nine minutes of the game with five healthy eligible bodies due to injuries and foul troubles. If they don't get freshman Karl Harris or sophomore center Tony Washington back from concussions, John Giannini will have just seven scholarship players to work with yet again. Rider’s in the middle of a tough start to the season; after a visit from Princeton, the Broncs now have road trips to La Salle, Maryland and Rhode Island plus a game against Cleveland State in the Cancun Challenge all in the next two weeks. But this is a program that won 21 games a year ago and returns a good portion of that team, including an experienced backcourt of senior Teddy Okereafor and juniors Zedric Sadler and Jimmie Taylor. Another senior, 6-7 guard Shawn Valentine, had 15 points and nine rebounds in the season-opening loss to Princeton.

The Skinny: After two nice wins in the comfortable confines of The Palestra, a still-very-young group of Quakers hits the road for the first time with the schedule about to get much tougher. After this one, Penn has a trip out to Washington, a Big 5 contest against La Salle, and then a trip up to Lafayette. It’s been a long time since Penn started off a season 3-0; 34 years to be exact, as Bob Weinhauer’s team beat Saint Francis (Pa.), Loyola Marymount and Stanford to kick off the 1981-82 season. Granted, many of Fran Dunphy’s best teams in the 1990s and 2000s were playing high-major opponents every night--so beating Robert Morris, CCSU and Delaware State might not be quite as glamorous, but it’s clearly a step in the right direction. The Hornets, who lost to in-state rival UDel in their opener on Friday, were led by Devin Morgan Jr.’s 10 points while five others chipped in five or more.

The Skinny: Villanova squares off against a new look Nebraska team that features eight new players that were not a part of last season’s 13-18 team. After easily dispatching the Fairleigh Dickinson Knights in their season opener, the Wildcats will get their first taste of one of the power five conference teams. In their first game, the Cornhuskers also won in lopsided fashion, beating Mississippi Valley State. Newcomers Andrew White III, a transfer from Kansas, and freshman Jack McVeigh add a long-range shooting threat. The two combined for 8-of-10 from beyond the arc in the win. While there are plenty of new faces, they retain Shavon Shields. Shields returns for his third season as a full-time starter. He is the team’s top returning scorer (15.4 ppg) and rebounder (6.0 rpg). Overall, not much is known yet about the Cornhuskers, but based on the limited sample size of one game, they are trending in an upward direction. They will receive their first true test tonight against Villanova.