Roman's gym turns Blue and White for an evening 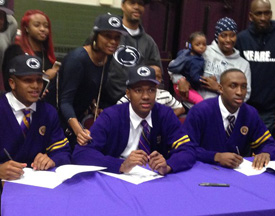 In Roman Catholic’s diminutive and history-filled gymnasium, where purple and gold usually cover as much space as they can, the dominant colors Wednesday night were blue and white.

There were friends, family and fans proud to be wearing Penn State basketball attire. The trio of young men who they were there to celebrate were applauded both in person and on a video call with their new coach and a room full of fans nearly 200 miles away, both crowds elated and eager about the future of the same team.

In this gymnasium and in a city where Penn State was barely an afterthought until recently, there was a substantial amount of respect for the program.

Respect is what the 2016 recruiting class means for Penn State.

The Roman Catholic trio of Nazeer Bostick, Tony Carr and Lamar Stevens along with Oak Hill’s Joe Hampton make the Nittany Lions’ class the best one in school history and one of the top 15-20 in the nation depending on who you ask. Every player and each team’s class is rated on some number or star scale by various services, but this collection of players can mean a lot more for Penn State and coach Patrick Chambers.

This group is legitimate. Coupled with the Lions’ 2015 class, they will make Penn State a competitive team in the Big Ten for at least a few years. This group shows other top recruits in Philadelphia and beyond that Penn State is a credible place to go play high-level basketball.

And that’s what Chambers has been trying to build since he got there in 2011, because it certainly was not that way beforehand.

“I wouldn’t know what to say. I wouldn’t say they were irrelevant, but nobody really talked about them,” answered Stevens, when asked what he thought about Penn State basketball at the beginning of his high school career. “I never thought I’d be sitting here saying I’m going to Penn State. I don’t think any of us would be.”

That says a lot. Sure, Penn State has landed some quality players over the years, but it’s never been a destination.

How has that changed in the last 40 months? Chambers – the former Philly U point guard and Villanova assistant – has used his city connections extremely well, his staff has been persistent throughout the Mid-Atlantic and they sold the opportunity to build something.

“We all realized we can make history at a school like this,” Carr said.

Chambers pointed out on the video feed that this did not happen overnight. He and his staff have been rejected for much longer than they would’ve like, but his fortune has turned around lately. Recruits are now taking Penn State seriously, and the school gave him a contract extension in March.

Penn State is going to have to win before it really gets the respect of casual fans. That’s going to take even more time, as the Lions look destined for another sub-.500 season in 2015-16.

But that’s really one of the last pieces in the puzzle, and one that Penn State basketball has always struggled to find.

Playing in the shadow of a 100,000-seat football stadium, it’s clear basketball will never be the No. 1 sport on campus. There were probably more Penn State basketball t-shirts in Roman Catholic’s gym on Wednesday than you’d see walking around PSU’s campus for 15 minutes. And the Lions are still lucky to get their 15,000-seat Bryce Jordan Center half full for most games.

That’s not going to change this week because Penn State got a handful of good players to sign to play next year. It’s going to take competing and winning, and that’s what this group can do.

If they accomplish that, Penn State basketball won’t have to search for respect anymore.