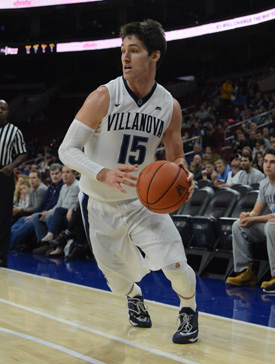 Ryan Arcidiacono (above) and Villanova get started with Fairleigh Dickinson on Friday evening. (Photo: Josh Verlin/CoBL)

Every day during the season on which there are games featuring any of the 10 Division I teams that CoBL covers, we’ll have a Tipping Off running bright and early, letting you know everything you need to know about the matchups.

Here are some feature stories previewing the bigger matchups tonight, followed by a look at the complete slate; as always, thanks to KenPom’s awesome site for his predictions--though keep in mind this early in the season, his predictions aren’t as reliable:

The Skinny: Having been selected near the bottom of the Ivy League preseason poll, expectations aren’t exceedingly high for this year’s edition of Penn basketball. That said, the Quakers have an opportunity to start off their season on the right note against a Robert Morris team that has finished near the top of the Northeast Conference pack the last several years, and made it all the way to last year’s NCAA Tournament round of sixty-four before being routed by the eventual National Champion Duke Blue Devils. Most importantly, this will be Penn’s first game under new head coach Steve Donahue, who took over for Jerome Allen this offseason. Another interesting storyline as Penn opens its season will be the way the Quakers make up for the unexpected loss of their leading scorer from a year ago, incoming senior guard Tony Hicks (13.2 ppg, 3.5 rpg), who left the team just two weeks ago to take a year off and pursue his academics. All in all, there are definitely a lot of question marks entering Penn’s opener; we’ll have to wait and see what kind of answers unfold on Friday night.

The Skinny: This is quite the opener for Temple, who gets one of the nation’s blue-blood programs on the court inside the Naval Academy, part of the Veterans’ Classic. The Tar Heels are without senior guard Marcus Paige (broken hand), and they’ll miss the 14.1 ppg, 4.5 apg and 1.7 spg he contributed on a nightly basis a year ago. But they’re loaded inside with 6-9 senior Brice Johnson (12.9 ppg, 7.8 rpg) and 6-9 junior Kennedy Meeks (11.4 ppg, 7.3 rpg), and backup point guard Nate Britt and Joel Berry were both top-100 recruits. The Owls have a track record of pulling big-time upsets when nobody sees it coming (Duke and Kansas in recent years), and there’s certainly plenty of talent on this Temple squad as well, led by seniors Quenton DeCosey (12.3 ppg, 4.6 rpg) and Jaylen Bond (7.6 ppg, 7.9 rpg).

The Skinny: Barring a catastrophic meltdown, it’s hard to see the Wildcats losing at home. Villanova has not lost at the Pavilion since 2013, and it would take a herculean effort by Fairleigh Dickinson to break the streak. The Knights are coming off of a rough season where they finished 8-21. Making matters worse, they lost five of their nine rotation players and be dressing six freshmen. This is a team that lacks experience, as well as size; freshmen Malik Miller (6-9) and Mike Holloway (6-7) are the only two players above 6-6. Expect Villanova to exploit this smaller interior by feeding senior center Daniel Ochefu. He had a double-double in the preseason exhibition win over Pace and should have another one Friday night, as the Knights ranked 334th in rebounding last year. If Ochefu can establish himself in the paint, it will open up the rest of the floor for the many guards that can shoot for Villanova in its balanced scoring offense.

The Skinny: The last three Lehigh seasons have started off the same way: going on the road or to a neutral site to take on a high-major opponent (Villanova, Minnesota, Baylor). This year will be no different, with the Mountain Hawks trekking to central New York to take on the Orange. Syracuse is projected as a middle-of-the-pack team in the loaded ACC, but boast a very experienced backcourt consisting of redshirt seniors MIchael Gbinije (12.7 ppg, 3.6 apg) and Trevor Cooney (13.4 ppg). Recent Trenton Catholic graduate and McDonald’s All-American Malachi Richardson is also stepping right into the starting lineup and providing some added shooting and size at 6-foot-6. Meanwhile, Lehigh boasts one of the top one-two punches in mid-major basketball, with returning Patriot League Player of the Year Tim Kempton (15.3 ppg, 8.7 rpg) and Rookie of the Year Kahron Ross (10.4 ppg, 5.8 apg). While the Mountain Hawks boast a potent offense, they will need wing Austin Price (11.4 ppg, 38.5% 3FG) to knock down shots and Ross to find ways to get into the lane against Jim Boeheim’s patented 2-3 zone.

The Skinny: Fran O’Hanlon is challenging his group right from the get-go, opening with four of five on the road including this visit to one of the top programs in the Atlantic 10. The Colonials are huge up front, with 6-10 Kevin Larsen and 6-9 Tyler Cavanaugh, a Wake Forest transfer, leading the way. This could be a breakout season for sophomore Yuta Watanabe, who averaged 7.2 ppg and 3.6 rpg in 22 mpg a year ago; the 6-8 sophomore made 35 percent of his 3-point attempts. All that size could be a real problem for Lafayette, who’s going to have to play a much-less-experienced duo down low no matter who’s in the game. Junior point guard Nick Lindner (12.8 ppg, 5.4 apg) will have a lot of responsibility for Lafayette this season, though senior guards Bryce Scott (8.5 ppg) and Zach Rufer (3.1 ppg) will be there to help out. 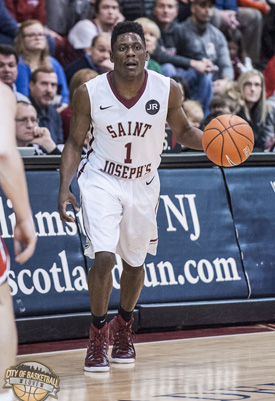 Shavar Newkirk (above) earned the nod at starting point guard for SJU in the season-opener against Drexel. (Photo: Tug Haines/CoBL)

The Skinny: A city matchup to start the season is intriguing. Given St. Joe’s is at home and it has DeAndre Bembry, the team is a rather heavy favorite in the eyes of KenPom. One thing to keep an eye on will be the backcourt rotations for both teams. Both Drexel and St. Joe’s had point guard battles throughout practice, and it will be interesting to see how Bruiser Flint and Phil Martelli split the minutes of their guards; Martelli has sophomore Shavar Newkirk and Lamarr Kimble vying for minutes at point, while Flint has redshirt sophomore Major Canady, sophomore Rashann London and freshman Terrell Allen doing the same. The teams played an ugly, early-season game last season, which St. Joe’s won 52-49 with the teams combining to shoot 17.4 percent from beyond the arc. Everyone in the gym Friday will be hoping that doesn’t happen again, but two much-improved teams shouldn’t disappoint.

The Skinny: The Hornets traveled to Newark last year and handed big brother a 13-point loss behind the strong play of MEAC Player of the Year Kendall Gray. Gray had 21 points and 12 rebounds, but the big man is not longer a Hornet - he now plays in Germany’s Bundesliga after graduating from the Dover campus this spring. While the Hornets lost key pieces from a squad that nearly made the NCAA tournament - they lost to Hampton in the MEAC Final - the Blue Hens are reloaded and graduated just one player, third team All-CAA guard Kyle Anderson. All-CAA rookies Chivarsky Corbett (8.8 ppg, 4.2 rpg) and Kory Holden (12.4 ppg, 5 apg) are back for their sophomore campaigns and head coach Monte Ross is hoping for big things out of junior Cazmon Hayes (11.4 ppg) and senior captain Marvin King-Davis (9.7 ppg, 5.7 rpg). UD has won six of its previous seven trips to Dover and to avoid the beginnings of last season, where they started 1-13, they will want to get off on the right foot against their First State rival. The Hornets didn’t have any players on the preseason All-MEAC team, but the 2014-15 Gatorade Delaware Player of the Year, DeVaughn Mallory, is a freshman who is expected to make an impact.