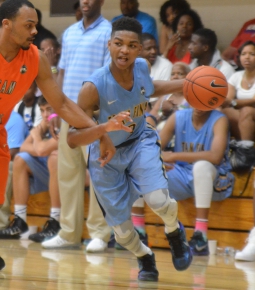 Archbishop Carroll's Josh Sharkey (above) signed with Samford on Wednesday, one of many area prospects to sign with their schools. (Photo: Josh Verlin/CoBL)

Wednesday marked the first day of the Early Signing Period, which allows committed Division I players to sign their binding National Letters of Intent for one week; once college programs get these letters, they're able to comment on their 2016 recruiting classes.

Here's a liveblog of everything going on throughout the day:

"We are pleased to welcome our incoming freshmen," coach Brett Reed said. "Each of these young men has demonstrated they will be great representatives of our basketball program, academic programs and campus community. They all come from caring and supportive families and have received solid coaching during their careers up to this point. I also believe that each has skills needed by our program and thus, should find a meaningful role that's fitting to their games."

Of the trio, Andree is the local product; the 6-8 forward hails from Christian Brothers Academy (N.J.). A stretch-forward, Andree had a very impressive summer with the Jersey Shore Warriors thanks to his ability to knock down shots from distance, and he can score inside as well.

"Pat brings two very important talents to our program," said Reed. "He can shoot the ball and also has a good basketball IQ. He will be a great addition and should thrive in our offensive system that values his skill/feel combination. I am very excited about him and the career we anticipate him having."

Hill School (Pa.) product James Fives is a freshman at Loyola this year, but he's a Scranton-area native who only spent a post-grad year at Hill.

"Historically, we haven't recruited Philadelphia very hard, but...with them being so close to Baltimore, one of our key things was hitting Philadelphia a little harder," Smith said. "It paid off with both of those guys."

Champion, a 6-2 guard, and Harriot, a 6-4 wing, will both be used in multiple ways in the Greyhounds' attack. Smith said he plans on using Champion at both guard spots, while Harriot, he said, could play anywhere from the '1' to the '4.'

"(Chucky) can pass the ball well, he's got a great-looking shot, I just liked his smartness about the game," Smith said. "(Harriot) has the body, he's big, he's athletic, he can handle it. He can really pass the ball, he can really see the floor. Very good in transition, going to be a great player defensively for us."

6:45 PM - Villanova made the much-anticipated announcement of its two promising big men, Hershey (Pa.) forward Dylan Painter and St. Thomas More (Conn.)'s Omari Spellman. With Daniel Ochefu set to graduate this season, the pair of 6-9 post players will be a much-needed infusion of size and talent to the Wildcats' roster.

Painter committed to 'Nova after an AAU season with Team Final on Nike's EYBL circuit that saw him garner over two dozen offers from high-majors throughout the country, drawn to his size and versatility, with his ability to shoot 3-pointers just as easily as he rebounds and block shots.

“Dylan is a great addition to our team in that he brings size, toughness, skill, and a high basketball IQ to our team," Villanova head coach Jay Wright said in a release. “Dylan grew up playing football and he brings a tough mentality with him. He’s also an outstanding student who’s been coached by Paul Blackburn at Hershey High School. We’re proud to welcome him to the Villanova family.”

As good as Painter is, he doesn't come in with quite the hype of Spellman, who would be the best prospect to enter 'Nova in quite some time if it weren't for Jalen Brunson's arrival this season.

At 6-foot-9 and 255 pounds, he's a load to handle in the paint with excellent footwork and hands; he's also got face-up ability out to near the 3-point line, and can put the ball on the ground as well. That's why most recruiting services, including ESPN, Rivals and more, have him ranked amongst the top 25 players in his class.

“Omari is a highly-touted player but is a really grounded young man who is playing for coach Jere Quinn at St. Thomas More,” Wright said. “He will be very well prepared for college basketball. I think he’s got the skills to play on the perimeter and inside. Given his size, that is going to be unique and give us a lot of depth and versatility next season.”

Martin, a 6-foot-3 shooting guard, committed to the Tigers back in May and then had a big summer on the AAU circuit with Team Final Black, routinely scoring 20 and 30 points wherever he played. Built like a linebacker, Martin excels in the open court but has developed over the last year to become much more effective in the half-court.

"We're thrilled that he signed with us, Jim McCarthy on my staff did a good job targeting him last year," Skerry said. "He's so tough, plays so hard, and I think people will see this year his passing, ball-handling and shooting have gotten really, really good."

Martin will be the second Neumann-Goretti product on Towson's roster, joining current junior John Davis. Davis, a 6-5 forward is expected to be one of the better interior players in the league after averaging 11.8 ppg and 8.1 rpg as a sophomore.

"He's been like a big brother and a mentor to Zane," Skerry said. "Certainly he'll help make his adjustment a smooth one."

4:45 PM - Lafayette's three-man class of Kyle Stout, Hunter Janacek and Cal Reichwein was officially announced earlier in the day (see below), and Fran O'Hanlon was able to comment on his group.

Stout (Parkland, Pa.) becomes the first local player to sign with the Easton, Pa. school since Eric Mugavero, a Phillipsburg, N.J. native who played in six games for the program in the 2001-02 season before a back injury kept him out the rest of his career.

The second member of the class is Janacek (Scarborough, Tex.), who brings to the table many of the same qualities as Stout, a 6-foot-6 wing.

"Hunter's a really good shooter," O'Hanlon said. "He can really shoot the ball, 6-4, pretty good passer, '2'-guard, in a pinch he could swing over (to point) but he's really more of a shooting guard. He's a real gym rat, he's a little like Nick (Lindner) in that he plays a lot, I think he has good upside.

Finally there's Reichwein, who committed to the Leopards over the weekend.

"Cal is a really good shooter, he has a very good basketball I.Q., he's a very good passer as well," O'Hanlon said. He brings a skillset that really fits into how we play."

Scott Padgett, the coach of Samford, spoke with CoBL on Wednesday to discuss what he likes about the 5-foot-8 guard. There are a few things that make Sharkey stand out in Padgett's eyes, including his passing ability.

"Over time, you get to know him and see his leadership qualities and the energy he brings to the court and his great personality and you see a lot of leader in him as well as talented basketball," Padgett said. "We expect big things from him, to be able to come in and play right away and I think he should have goals of trying to be the all-time assist leader when he leaves Samford."

Sharkey is going far from home for college. But he likes the Birmingham, Ala. school, and Padgett likes what he sees in the point guard from Philly.

"What I always liked about the Northeast point guards is how tough and kind of tenacious they are and he definitely fits that mold," Padgett said.

--In other Archbishop Carroll news, shooting guard Ryan Daly, who is verbally committed to Hartford, will not be signing his Letter of Intent until next week.

Reichwein, who committed to the Leopards over the weekend, will be a four-year starter in high school and was a first-team All-Suburban One League selection last season. He is joined in the class by fellow guard Hunter Janaeck and wing Kyle Stout.

Janaeck is 6-foot-4 and hails from Houston. Stout, meanwhile, has a much shorter trip to Lafayette's campus. Stout is entering his senior season at Parkland High School. He averaged 12.1 ppg last season, helping Parkland go 28-2.

The Nittany Lions announced the signings on their Twitter account, including a quote from coach Patrick Chambers on each player.

On Bostick: “Nazeer’s nickname is ‘Horse’ for a reason – he takes pride in doing the heavy lifting and the dirty work. He is the heart and soul of this Roman Catholic team, driven by being a fierce competitor with a tremendous amount of passion for the game.”

On Carr: “Tony is the leader of his team – like a quarterback who is steady and poised while working to make everyone around him better. He can undoubtedly score, but his focus is on being a pass-first point guard and to create winning plays.”

On Stevens: “Lamar is going to thrive in the Big Ten with his talent and physical abilities. He creates a mismatch no matter who is guarding him and has the skillset to do a little bit of everything.”

The three players are holding a Signing Day ceremony tonight at 6:45 p.m. which will include the fourth player in PSU's class, Oak Hill forward Joe Hampton, via Skype.

10:30 a.m. - Happy National Signing Day! Wednesday marks the first day that 2016 recruits can officially sign their Letters of Intent to play at a D-I school.

We'll be updating this live blog all day with news and notes, as many Philly area players are expected to put their signatures on the dotted line.

You can catch up on what to expect and see who is verbally committed to which school with our 2016 recruiting profiles. 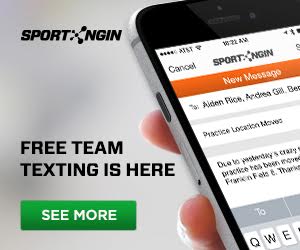 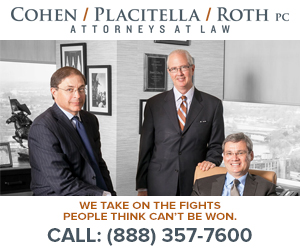