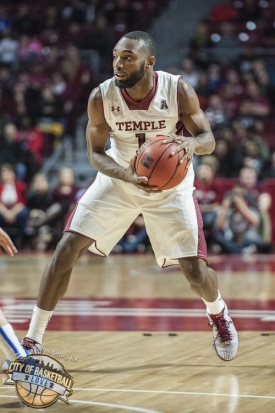 Josh Brown (above) could be the next Temple guard to break out as a junior. (Photo: Tug Haines/CoBL)

Temple has no time to get settled before taking on its toughest opponent of the early part of the season.

The Owls take the court for the first time in front of the public on Friday evening, on the court at the Naval Academy’s Alumni Hall in Annapolis, Md. The opponent is North Carolina, ranked No. 1 in the preseason Associated Press poll and tied with Kentucky for No. 1 in the Coaches' Poll.

Despite having a number of players moving into new roles and a freshman class that will largely have to contribute right away, Fran Dunphy has to have his team ready to go right away against the Tar Heels, who despite currently missing senior guard Marcus Paige (broken hand) are still one of the most talented teams in the entire country.

“It’s a tremendous challenge, these guys are really good,” the Owls’ 11th-year head coach said at the team’s media day on Monday. “Tremendous challenge, but I think that’s what you want, it’s what the kids want, I think it’s what we advertise when we recruit, and so we’re playing the best.

“And when CBS comes to (us) a while back and said ‘would you like to open the season with North Carolina at the Naval Academy in the Veterans’ Classic,’ you say ‘absolutely, great opportunity.’"

Temple has pulled off some impressive upsets in recent memory.

It’s no coincidence that each of those games was powered by a stellar performance from a lead guard, and this year it’s junior Josh Brown, a 6-foot-3, 185-pound who’s set to take the reins and go from key reserve to featured performer in Temple’s lineup.

Brown, who averaged 6.3 ppg, 3.1 rpg and 1.5 apg a year ago, said he’s been watching the game films of top-10 upsets that Temple has pulled in recent seasons--specifically focusing on Cummings, Wyatt and the like.

“Just be confident,” he said about what he learned from their outings. “Run the show and just play basketball…(I’ve) got to be more aggressive, set the tone early, make the first punch.”

While Brown, who’s made four starts in his career thus far, gets used to the spotlight, three other Owls will be entering a college game for the first time when Dunphy calls them off the bench Friday night.

This will be Aflakpui’s first action since tearing his meniscus three games into his senior year in high school.

“I’ve been out for like 9-10 months and (I was) playing basketball five years all-year round straight,” the 6-foot-10, 230-pound forward/center said. “Having to take a year off was pretty hard for me. it’s exciting to be back.”

For Alston, whose father played for Temple in the mid-90s, this is an event he’s been waiting for his whole life made even more special by who it’s against.

“This is a huge opportunity, playing against the number one team in the country, my first game, looking forward to it,” he said. “Ever since (the matchup) came out, my senior year, I’ve been thinking about it.”

A 6-4, 170-pound guard, Alston will be backing up Brown at point and will need to run the offense for stretches against the Tar Heels.

This won’t quite be his first action against another high-level Division I program, as Temple scrimmaged both West Virginia and Drexel in private during the run-up to the opener.

“The scrimmage versus West Virginia really helped me out a lot,” Alston said. “West Virginia’s a team that presses a lot, so it got me adjusted to the pressure of the game, defensive pressure, so it helped me a lot.”

After North Carolina, things won’t get much easier for Temple.

The Owls’ next three games will come in Puerto Rico in the Puerto Rico Tip-Off, beginning with a game against Richard Pitino’s Golden Gophers. And there’s more.

“We get this North Carolina game, then we play Minnesota, there’s other top teams like Miami (in Puerto Rico), then we play Wisconsin,” Alston said. “I feel like if we can get those games, we’ll have a lot of confidence going into the AAC.”