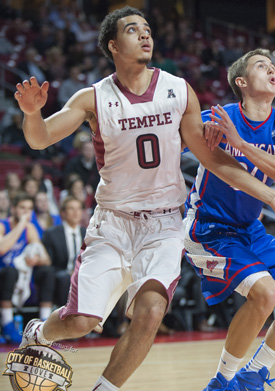 Here’s a notebook of material from Temple’s Media Day on Monday:

Dunphy still coy on starting lineup
With a lot of talent and experience back from last season’s team that lost to Miami (Fl.) in the NIT semifinals, Temple head coach Fran Dunphy has quite a few options in his starting lineup.

Senior wing Quenton DeCosey (12.4 ppg), senior forward Jaylen Bond (7.6 ppg, 7.9 rpg) and junior point guard Josh Brown (6.3 ppg) are sure to be included in the starting rotation when the Owls take the court against North Carolina on Friday, but after that, there could be any number of players who could fill out the final two spots.

Dunphy says there’s “still some question marks” but feels experience and past success are invaluable.

“The guys who have been around the most are certainly the guys who are going to be playing the most. I would probably say to you that Josh Brown is a guy who’s been our hardest worker, he’s spent the most time on the court, studying film,” Dunphy told the assembled media. “His first two years I thought he really did a very good job for us, I don’t want to be in late-game situations without him so you can pretty much trust he’s going to be there. Quenton DeCosey is one of our best scorers, in my mind he has a lot of responsibility this year.”

Bond was voted team captain, and will be counted on to control the glass and score inside. Sophomore Obi Enechionyia, an athletic 6-8 combo forward, really came on in the second half of last season, and should vie for a spot in the starting lineup, if healthy. Dunphy said “he hurt his side a little bit two weeks ago” and needs to show he can perform well enough to play on Friday.

The final spot could go to another senior, shooting guard Devin Coleman. The lefty who transferred in from Clemson a season ago has “done a pretty good job of stepping up, so [he’s] got a chance to be there,” according to Dunphy. He also said redshirt junior forward Daniel Dingle also has a shot to start after having “been our most consistent performer” in the team’s first two scrimmages.

Dunphy noted that freshmen Trey Lowe, Levan Alston Jr. and Ernest Aflakpui will not be starting, but are “going to be in the game often and early.”

Aflakpui getting back to full health
When Temple freshman Ernest Aflakpui first gets his opportunity to take the court against North Carolina on Friday, it’ll have been nearly a full year since his last official game appearance.

The 6-foot-10, 230-pound center out of Archbishop Carroll (Pa.) missed all but three games of his senior year due to a knee injury suffered in practice. That meant spending the whole winter, spring and summer working on getting strength and mobility instead of getting valuable playing time.

“I got to work on my free throws,” he said with a laugh. “And then keeping my mind clear and work on rehabbing and stuff like that, trying to get back on the court.”

Aflakpui has been practicing with the team during their six-week run-up to the season, and took part in so-called “secret” scrimmages against West Virginia and Drexel in the more recent past.

Temple could use us help inside this season; Jaylen Bond is Temple’s leading returning rebounder (7.9 rpg), but at 6-7 he’s a little undersized to defend some of the opposing forwards he’ll see this year. And Aflakpui has got a higher ceiling than 6-10 senior Devontae Watson (2.7 ppg, 3.2 rpg) and 6-8 junior Mark Williams (3.5 ppg, 2.6 rpg)--as long as he’s healthy.

“I would say his trust in his knee is close to 100 percent, but you can see there’s a little bit of rust,” Dunphy said. “He gets the ball inside, he’s going too fast and it’s a constant reminder of listen, low and slow is okay at this point, let’s really be careful with how we’re going about it. But he’s been great, otherwise been great.”

Aflakpui will get his chance against an impressive North Carolina front line on Friday; Dunphy mentioned he’d been putting the freshmen in around eight minutes into their scrimmages, though that’s no guarantee that’s when they’ll make their first appearance on Friday.

Or how long those appearances will last. 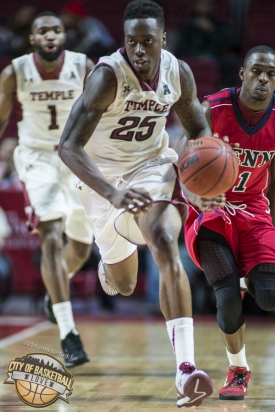 Quenton DeCosey (above) and the Owls aren't expecting the 30-second shot clock to have much effect. (Photo: Tug Haines/CoBL)

New rules changes shouldn’t change Owls’ gameplan
In the offseason, the NCAA implemented new rule changes to potentially improve the pace of play in college basketball. One of the major rule changes was decreasing the shot clock from 35 to 30 seconds. Luckily, for the Owls, they’ve already worked with the 30-second shot clock throughout their NIT Tournament run last season, which included a 90-point outburst--their highest point total of the season--in the second round against George Washington.

Dunphy, whose team averaged 65.8 points per game a year ago, does not believe the decreased shot clock will have the effect on overall scoring in college basketball that its proponents were hoping it would.

“There’s going to be, I don’t know how many, more end of shot clock opportunities,” Dunphy said. “Sometimes we force shots up there, most teams force shots up there, so it’s more bad shots that might be in the game--and now (how) are you reacting to that, is your bad shot going to result in poor defensive transitioning, where now the teams that are turning it into offense are going to blow it down the floor?

“I don’t think it’s going to change, we’re not going to have instantly greater scoring because the shot clock’s gone down, that’s my belief.”

Senior wing Quenton DeCosey, the team’s leading returning scorer, feels it has not forced the Owls to deviate from their gameplan.

““It hasn’t been that hard of an adjustment. We just have to push it up the floor faster, get in our set and if the play breaks down bring it out,” DeCosey said.

Carvalho likely to redshirt
While three of Temple’s four freshmen are going to see significant minutes this season, it looks like the last one to join the program won’t see the court until next year.

Argentine native Ayan Carvalho, who committed to and arrived at the school in August, will be taking the year to get acclimated to college life and the college game.

“Ayan is probably going to redshirt, that’s what we’ve pretty much determined,” Dunphy said. “We haven’t made that ultimately decision yet but it looks that way.”

The Owls can afford to sit out the 6-foot-5, 190-pound guard, with plenty of depth in the backcourt this year.

Brown will play the majority of the minutes at point guard, with Alston backing him up as well as playing some off the ball. Coleman, DeCosey and Lowe will all see lots of minutes out on the wing, with Dingle and Enechionyia also able to play the ‘3’ in Dunphy’s system if he wants to go with an extra-large lineup.