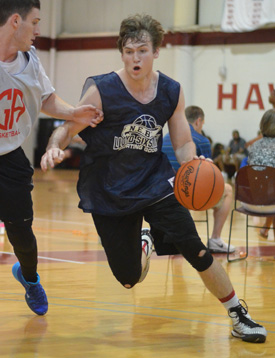 Cal Reichwein didn’t have expectations of playing Division I basketball.

Though he dreamt of a future at the highest levels of college basketball as a young boy, the Central Bucks West senior thought that was out the window after tearing his ACL coming out of his freshman year. After all, the 6-foot-2 guard wasn’t even on the radar as a D-I recruit at the time, and now had set himself back close to a year with the injury.

So thinking about playing D-I basketball went out the window, at least for a while.

Reichwein’s fortunes started to turn in the spring when Lafayette hired Jimmy Fenerty as an assistant coach; the two knew each other from Reichwein attending camps Fenerty’s dad, Germantown Academy coach Jim Fenerty, still runs at GA. Having already established a connection with the Lafayette staff prior to Fenerty's arrival, Reichwein reached out and things started to pick up steam.

He went up to the school's elite prospect camp and played well enough that the staff started texting and calling, but there was one primary problem.

It was a difficult decision to make; Division II West Chester (Pa.) was in heavy pursuit, and Reichwein said that if it wasn’t either Lafayette or West Chester, D-III Ursinus was also under consideration.

But that Division I dream couldn’t be denied.

On Saturday night, Reichwein committed to head coach Fran O’Hanlon while on a visit to the school with his friend, Lafayette football commit Tommy Strasburger.

Stout and Reichwein both came out of the Jersey Shore Warriors AAU program, though Stout played for the organization’s top 17U squad this summer while Reichwein was the top performer on the ‘B’ squad.

“I didn’t play on the same Jersey Shore team as him so we don’t have a really strong relationship yet,” Reichwein said. “But we talked yesterday, he’s a really cool guy and I’m sure we’ll be roommates, hopefully next year.”

Though Reichwein won’t be on an athletic scholarship at Lafayette, he said he didn’t feel like he was being recruited as a walk-on throughout the process.

“I’ve been up and down there, been to some practices, just soaking in the experience,” he said. “Coach O’Hanlon’s actually, surprisingly, really put a lot of interest in me and he’s pushed me to go there. So that was really a good feeling.”

Though he doesn't possess ideal athleticism for a Division I guard, Reichwein is an extremely intelligent combo guard who can set up his team's offense and play either on or off the ball. He's got tremendous court vision and passing ability, and is a very good spot-up 3-point shooter, which works out well in the Leopards' system.

Now, Reichwein can focus his efforts on his senior season for the Bucks, who are expected to compete for a Suburban One League championship with a talented group of seniors.

After that, it’s all about Lafayette, and helping get the Leopards back to the NCAA Tournament after making it there this spring.

“It’s always been my dream to play Division I and have an opportunity to play in the tournament, which has actually been my childhood dream,” Reichwein said. “Just having an opportunity to do that is awesome.”