Here are several observations from Villanova’s 80-45 win over Pace University on Sunday afternoon:

Post depth issues show in win
One of the main concerns heading into this season is how Villanova would manage with a limited amount of traditional big men in the frontcourt. The Wildcats are leaning on 6-11 senior Daniel Ochefu and 6-9 redshirt sophomore Darryl Reynolds to anchor the post, with 6-8 freshman Tim Delaney sidelined for the season by a hip injury.

Ochefu, now in his third year as a starter, looked impressive against Pace, scoring 10 points and grabbing 12 boards in the win. He also led the way on defense, notching a game-high three blocks.

The senior center has shown steady improvement in each of his three seasons so far at Villanova. Once known for just his defensive prowess inside, Ochefu has blossomed to become a contributor on both ends of the court.

However, it is unrealistic to think that he can go all 40 minutes on a nightly basis.

The public got its first glimpse of Villanova’s frontcourt in the preseason exhibition game, and it appears to still be a work in progress.

When Ochefu was on the bench, Reynolds was tasked with filling in the middle.

The 6-foot-8, 225-pound forward struggled at times during the game. The junior logged 11 minutes of playing time, scoring just two points and collecting three rebounds. His woes were made apparent with a botched two-hand dunk attempt and his three fouls.

Overall, though, 'Nova head coach Jay Wright was pleased with his frontcourt's play against a Pace team that spread the floor.

"I think the frontcourt did pretty well," he said. "When you play a team like this that spreads you out and runs kind of a Princeton-style offense, it’s usually harder for the big guys to defend on the perimeter, and I thought our guys did a pretty good job.”

While preseason is the perfect time to tune up and address mistakes, it also brings up more questions that need to be answered for when they meet greater opposition. 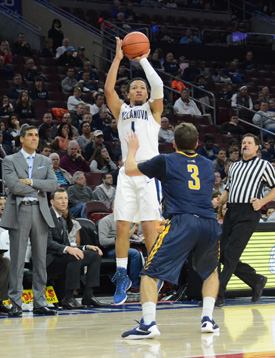 Jalen Brunson (above) got more assertive as the game went on. (Photo: Josh Verlin/CoBL)

The most anticipated freshman debut by far in this region has been that of Jalen Brunson, Villanova’s top-20 recruit who won MVP of the FIBA U-19 tournament this summer.

Brunson didn’t light up Wells Fargo Center right away, scoring three points in the first half on 1-of-4 shooting, all from 3-point range. But the 6-foot-2 point guard got more and more comfortable as the game went on, finishing with a game-high 13 points to lead four other teammates in double figures.

“I would (grade) myself just average,” he said. “I know there is a lot of stuff I can work on and stuff I can get get better at. Every game is not going to be perfect, I’ve just got to be willing to learn and get better.”

Brunson did look solid on the defensive end, getting through and around screens and helping out in Nova’s press defense.

He didn’t push the issue too much on the offensive end, though he did have a nice pull-up jumper from near the Villanova bench, as well as a pull-up 3-pointer in transition, both in the second half.

Many of his looks came in the flow of Villanova’s offense, which emphasizes making the extra pass and not settling for tough shots. But most of the Wildcats don’t quite have Brunson’s play-making abilities, for himself or for others, and for them to reach their potential he’ll need to play at the same level he did in that FIBA championship.

“He’s not as assertive right now, he’s acquiescing to a lot of upperclassmen--which is okay, he’ll get it,” Wright said. “He’s concentrated on making sure he’s doing the right thing rather than just playing aggressively, which happens with young players who are smart and they really care about the team.”

Same game, new rules
The NCAA basketball rules committee made a few changes going into the 2015-16 season. While the game at its core remains the same, a couple tweaks still need some time getting used to.

Referees are more keen on regulating the physicality of the game. The NCAA wishes to establish greater freedom of movement on the floor. Gone are the days of hand-checking the dribbler and bumping cutters. Screeners have to be sure they stay still and planted, or they may warrant a foul.

The beginning of the game was a trial period for both teams, as the new changes made their presence known. Fouls on both sides took away from each team’s rhythm.

“I think the fouls you saw early, a lot of the hand-checking, touching fouls, the moving screen fouls, that’s an emphasis,” Wright said.

Though the fouls decreased as the game went on, it's a trend that's expected to continue through the first few months of the season.

Aside from the player inflicted fouls, changes have also been brought to the pace of the game.

It is unsure of how the new 30-second shot clock will affect the way teams orchestrate their offensive possessions. However, there was another time-related issue that was more concerning to Wright.

Sending the team back out after a timeout is something that seems simple, but failure to comply with the 10-second clock after a break can result in a warning and even a one-shot technical foul.

“They’re really making an emphasis on getting out onto the floor at the first buzzer, and they’re going to put the ball in play,” Wright said. “We were really cognizant of that, to get guys out of the huddle, and I actually thought we did a good job of that because we’re usually not good at that.”