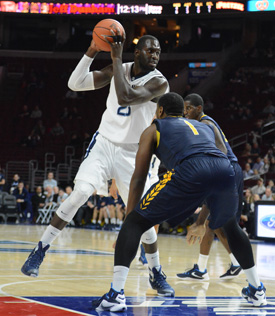 Daniel Ochefu (above) had a double-double with 10 points and 12 rebounds against Pace. (Photo: Josh Verlin/CoBL)

Villanova coach Jay Wright wasn’t sure exactly what to expect from his Wildcats during a Sunday exhibition game at Wells Fargo Center against Division II Pace University.

“They ran an offense that they didn’t run last year, but they ran it well, too,” Wright said. “And we struggled a little bit early, but I liked the way we adjusted to it.”

With high-expectations coming into the 2015-16 season, the defending Big East champions and preseason No. 11 (AP) Wildcats didn’t look quite that elite early on, falling behind early to their Division II opponent.

Ultimately though, Villanova’s talent proved too much for Pace in a 80-45 victory.

It took the Wildcats a little while to find their rhythm. Villanova started 4-of-15 to start the game, trailing 16-8 just after the first media timeout.

“I don’t think it was as much of a slow start as we didn’t know what they were going to do” Wright said. “They came out and ran that spread offense, the Princeton-style and they were really taking advantage of Daniel Ochefu, they were bringing him away from the basket.”

But the Setters couldn’t hold on after the Wildcats went on a 26-4 run late in the first half.

It was Ochefu, the Wildcats’ 6-11 senior center, who helped spark some intensity with a big dunk. That fired up the team’s defensive pressure, which began to turn Pace over and flip the momentum.

Once the Wildcats got out in front, taking their first lead with 7:52 left in the first half, they never looked back, leading 38-20 at halftime and by as many as 37 late in the second half.

Jalen Brunson, Villanova’s heralded freshman, finally got on the board hitting his first 3-pointer at the 4:50 mark in the first half. The 6-2 point guard out of Stevenson High School (Ill.), started off slow, missing his first four 3-point attempts, but seemed a lot more comfortable on the floor, finishing with 13 points on 6-of-15 shooting in a team-high 27 minutes.

“I would (grade) myself just average,” he said afterwards. “I know there is a lot of stuff I can work on and stuff I can get get better at. Every game is not going to be perfect, I’ve just got to be willing to learn and get better.”

Freshman guard Donte Divincenzo (Salesianum, Del.) had a solid preseason debut, hitting three of his seven shots from the floor for nine points, with three steals and two assists as well.

The Wildcats usually play six games a season at the Wells Fargo Center, home to the NBA’s Philadelphia 76ers. But due to the NCAA Tournament coming to the stadium this March, the Wildcats will only play three games there this season so they are eligible to potentially play there in the Sweet 16 and Elite 8.

Wright will take any opportunity he can to get his players some more experience inside the nearly 20,000-seat arena.

“We try to get some practices down here when we can because the games we play here are always big games against really good teams,” he said. “You don’t want to be as uncomfortable as (your opponents) are, you want to have a little advantage.

“This is very valuable to us; guys like Jalen and Donte, they’ve never played here, so you don’t want them playing the first game against Providence the first game they play here.”

Villanova’s regular season gets underway on Friday, with a 7 PM home game against Fairleigh Dickinson.