Philly U stuns La Salle at buzzer in exhibition 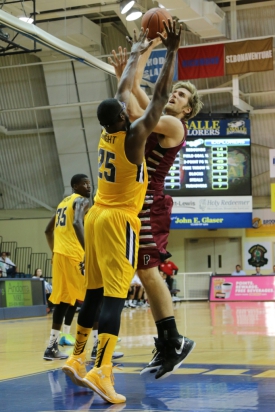 Peter Alexis posts up against La Salle during an exhibition prior to the 2014 season. (Josh Verlin / CoBL)

It was a broken play that resulted in an off-balance jumper off one foot. And when that jumper out of the hands of Philly U’s Kaison Randolph found the bottom of the net, it was the fitting end to a furious comeback and startling upset.

Randolph’s jumper to beat the buzzer lifted the Division-II Rams to a 79-78 win in an exhibition match up against La Salle on Saturday. Philly U trailed by 25 points early in the second half, but ended the game on a 50-24 run.

It’s a puzzling defeat for the Explorers, though coach John Giannini noted afterward he thought it was a result that will make his team better in the long run, saying “I’m a bizarre combination of disappointed and extremely pleased, I think it’s a lesson that we absolutely could not duplicate at practice or if we had won the game."

For Philly U, it’s a memorable win that launches the team into the season riding high.

“It’s a great feeling. We needed that confidence booster,” said senior guard T.J. Huggins, who scored a game-high 24 points. “We lost a scrimmage earlier in the week. But this gets us in the right place and shows we can play with anyone.”

The Rams chipped away at the Explorers’ lead for 18 minutes and took their first lead of the second half when Peter Alexis converted a layup with 19 seconds left to make it 77-76. La Salle immediately regained the advantage as Jordan Price – who had a team-best 18 points – hit two free throws with 10 seconds left.

Without a timeout, Randolph got the ball and tried to set up a play, but then he realized he was running into defenders and out of time. So he improvised, and the result was a shot he’ll never forget.

“I looked at the game clock and it said six seconds, so I had to go,” Randolph recalled. “I did a spin move in the lane, and someone cut me off. I saw there were two seconds left, so I just shot it.

“…It was just weird. But you dream of those moments. I looked at the clock and I was thinking ‘Oh this is not going in.’ Then it went in, I knew we won the game and I was so happy.”

The shot shocked the La Salle bench, as well as the few hundred Explorers faithful who made their way to Tom Gola Arena to see their team for the first time this season. La Salle was without Tony Washington and Cleon Roberts, both of whom were dealing with injuries and should be ready for next week’s opener against Towson, according to Giannini.

A loss was not something the coach was expecting Saturday, but he views it as one of the best learning tools his team could have. Giannini had an odd mixture of emotions after the game.

“Make no mistake about it, I’m upset, but at the same time, I completely believe that this is the best possible thing that could have happened to us, he said.

“…No matter what a coach says about defense and rebounding and toughness, it does not match the experience of losing because you gave up 50 points in a half. It does not match the experience of giving up 18 offensive rebounds and getting out rebounded by 11. Our players learned so much today about how to win a basketball game. Frankly, if we would have won by one, the message would not be as profound.”

All positives La Salle had in the game came in the first half. The team made eight 3-pointers in the first 20 minutes, including four of its first five. Freshman Karl Harris had 12 points in the first half, and the team shot 64 percent from the field before the break.

"We have so many young guys and I think they lost confidence during the game, and I think, obviously, Philly U really gained confidence once they realized they could really manhandle us on the boards a little bit,” Giannini said.

Giannini admitted he didn’t expect to sleep well Saturday night as he tries to figure out more about what went wrong before his team plays for real in a week.

Meanwhile, Herb Magee and Philly U may have had some questions answered. The Rams – who won the CACC title last season -- lost their starting point guard in Andre Gibbs to a torn ACL in the fall, and the team’s leading scorer from last year, Derek Johnson, was kicked off the team in August.

The win doesn’t officially count for Philly U, either, and it doesn't fill the holes they have from last season. But it's just about the best win a team could have in the first week of November.

“We weren’t expected to win,” Huggins said. “We even started the second half slow, but it started at the defensive end. I thought it was possible, I told that to coach Magee earlier in the week that I thought we matched up well with them.”