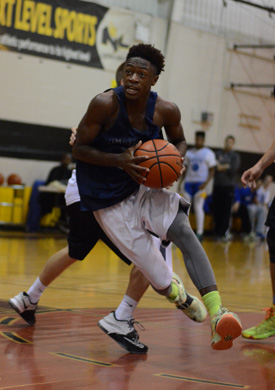 Timber Creek's Caleb Bowser (above) is one of several talented athletes on the Chargers' roster. (Photo: Josh Verlin/CoBL)

If Timber Creek head coach Rich Bolds could design a group of young men who play basketball the way he wants to, one would imagine that group would look an awful lot like the one he has under his guidance this season.

When the Chargers set up their trapping defense, it’s a serious problem even for teams with multiple capable ball handlers.

Seniors like Randy Bell (6-foot-3) and Caleb Bowser (6-2), Donovan Spencer (6-4) and Denzel Washington (5-11) are all speedy and athletic, with long arms and quick hands and a great understanding of just when to double and triple-team opponents to get them to cough it up.

And going the other way they’re equally dangerous, with Bell and Bowser both equally capable scoring or creating for themselves or teammates, all of whom love to attack the rim.

“When we start getting steals and everybody’s getting into it, it makes it more fun for everybody,” Bowser said. “We’ve got to get steals so we trap every time, go for the ball.”

When Timber Creek is forced into its half-court offense, though, the threat is far from neutralized. Bell (16 ppg) and Bowser (14 ppg) are both capable of breaking down their man off the dribble, and Bell is a solid perimeter shooter as well. The two are both hearing from several Division II and Division III schools, including Wilmington (Del.) and Widener (Pa.).

The two of them alone are capable of causing serious issues for opposing defenders, and the rest of their teammates know how to space the floor and pass the rock to get easy buckets.

“What I tell these guys is everybody’s going to look at your athleticism. But we’ve got to be able to do the skill work,” said Bolds, now in his fifth year as head coach. “When we’re in the gym in the summer, it’s all skill work. We don’t do up-and-down, the pressure, we do that later on. The skill work is what we do. Drive-and-kick, jump-stops, pivots, all of that.”

Last year, Timber Creek had a 12-14 record, losing eight games by seven points or fewer against a difficult schedule that included Washington Twp., Camden, Martin Luther King (Pa.) and more. But they made it to the South Jersey Group 3 semifinals before falling to Delsea and Keith Braxton, who dropped 42 points in the victory.

Considering it was the first season of varsity action for the four seniors mentioned above, their coach believes they have what it take to flip the script this year.

“I really don’t worry about regular-season wins and losses because I want to make sure at the end of the year we’ve got to get ready for the playoffs,” Bolds said. “The fact that we lost a lot of close games was very encouraging to me, and towards the end of the year we started to pick it up.”

One reason the team improved at the end of the year was the play of 6-5 wing guard Maurice Murray, part of a promising sophomore class for the Chargers.

Though Murray started his freshman season at the JV level, by the end of the year he was playing with the varsity squad, and playing well. His final three games of the year were 13 points against Lindenwold, 21 in the South Jersey Group 3 quarterfinal win over Cumberland and then 15 in the season-ending loss to Delsea, setting the bar high for his move into the starting lineup as a sophomore.

“I explained that to his dad, I’m going to bring him around slowly but by the time his sophomore year comes around there’s going to be more expectations,” Bolds said. “I think if he works at it, if he listens, if he keeps the fire I think he’ll be our next pro, I think he will. But it’s a long way off.”

Joining Murray as those who will play as sophomores are 5-11 guard Ricky Martin, 6-0 guard Dylan Elliott and 6-3 wing Isaiah Sanders, who Bolds said he expects to be one of the top reserves this season.

At a school whose athletics programs have been known for its success on the football field--Timber Creek has made the last two South Jersey Group 4 finals and has sent numerous athletes onto Division I rosters--the basketball program is ready to make some noise.

“I think we’re starting to get there,” Bolds said. “We’ve got some young guys that are really good. We’re starting to build our own identity; if we’ve got to piggyback off the football team that’s okay, eventually we’ll get to where we need to get to.”