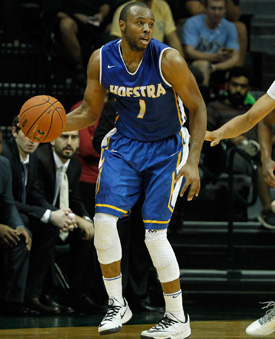 The Colonial Athletic Association was a logjam last season, with four teams tied with identical 12-6 records at the end of the regular season. Seven of the 10 teams finished at .500 or better.

It's certainly shaping up to be that way yet again, with eight teams who seem to have a fighting chance of a championship heading into the season depending on how certain transfers and injury situations shape up.

Below is CoBL's best guess at how the league will turn out; to see how coaches throughout the league see things shaping up, click here:

Outlook: Expectations are high at Hofstra as the Pride return six seniors and three juniors from last year’s team, and add two talented freshman guards in 6-1 Justin Wright-Foreman and 6-0 Desure Buie. Aside from the graduations of Nesmith and Kone, this year’s Pride should be experienced in both a competition sense and a team chemistry sense, having, barring the newcomers, all played with one another for at least a full season. Philadelphia-native redshirt seniors Juan’ya Green, a 6-2 guard, and Ameen Tanksley a 6-5 wing, accounted for a combined 33.3 points per game, leading the Pride offensively last season after following Mihalich from Niagara two years ago. The tandem should play a large role in what has the potential to be one of Hofstra’s most impressive seasons.

Outlook: Returning four of their top five scorers from a season ago, the Dukes have reason to be optimistic about the 2015-16 campaign, especially having finished as part of the four-way tie for first in the CAA last year. Ron Curry of Pennsauken, New Jersey, and Winston Grays III are the lone seniors for JMU, but a highly-talented junior class including players like 6-8 Haitian forward and Lower Merion product Yohanny Dalembert, 6-0 Butler transfer Devontae Morgan, and 6-7 Jackson Kent just to name a few. The Dukes, on an interesting note, aren’t lacking for overseas talent on their roster, with five different players hailing from foreign countries.

Outlook: The Huskies enter this season with a CAA title to defend, and will have the majority of last year’s tournament team back and ready to fulfill that possibility; of the five players who played in every single game for Northeastern in 2014-15, all but one--Scott Eatherton--return for another season. Such experience in a starting five is hard to find, and with a deep bench to complement experienced seniors like 6-6 guard David Walker and 6-8 forward Quincy Ford, the Huskies have legitimate reason to believe that a second straight title is a possibility. 6-10 freshman center Jeremy Miller leads a recruiting class of five freshmen that could help Northeastern continue to sit in the CAA’s upper echelon for the next several seasons.

Outlook: On paper, the Tribe have plenty coming back, led by the incredibly versatile Prewitt and Tarpey, a pair of wings who can dribble, pass, shoot and defend multiple positions inside and out. Dixon, another guard with great size (6-6), is another returning starter, as is 6-9 forward Sean Sheldon (6.2 ppg, 4.3 rpg). But they’ll have to replace one of the best scorers in the country in Thornton, a 6-3 guard who was taken in the 2nd round of the NBA Draft but is now playing overseas; he scored more than 2100 points in a stellar four-year career. His absence means several of the above players will be put in different spots, and how they respond will determine their standing at the end of the year.

Outlook: The 2014 CAA champions had an expected rebuilding year after losing four starters from that team, and things were made even difficult by an early-season injury to Anderson that cost the team’s only senior the first seven games of the year. A 7-4 record over their final 11 games of the year shows that this group has promise, with sophomore point guard Holden and small forward Corbett part of a group of nine players who were underclassmen last year but now bring a lot more experience to the table. If they can carry that momentum into this season, the Blue Hens could surprise some teams with weightier expectations. 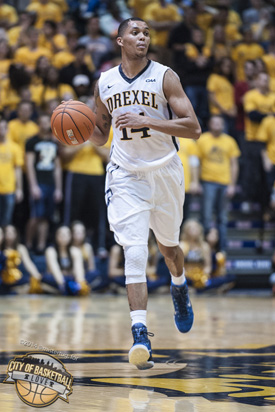 Drexel gets everybody back except Damion Lee (above), who transferred to Louisville for his final year. (Photo: Tug Haines/CoBL)

Outlook: The Dragons will turn the page on the Damion Lee era, as Lee will finish his career at Louisville as a graduate student. Drexel will hope to remain healthier than they have in the past few years, specifically a season ago, where head coach Bruiser Flint was left with just seven scholarship players at times. There is certainly talent back in West Philadelphia, as senior Tavon Allen and sophomore Rashann London return in the backcourt. 6-foot-7 junior forward Rodney Williams is also back, and will join Kazembe Abif in the frontcourt. Abif, along with sophomore point guard Major Canady, missed all of last season’s campaign due to injury. Flint will welcome a new face in Utah transfer and 6-foot-5 sophomore guard Ahmad Fields, who joins the team after sitting out a year per NCAA rules. If all goes well, Flint will be able to utilize a much deeper rotation as the Dragons try to right the ship in CAA play.

Outlook: The Tigers had an expected tough season last year following the graduation of a big senior class the year before, one largely consisting of transfers that Skerry brought in when he got the job four years ago. Now begins the climb back up the standings, with six players back who started at least 10 games a year ago and a seventh, Davis, who was behind only McGlynn on the team in scoring and led the Tigers in rebounding. Hawkins, a 6-1 sophomore guard, needs to take a big step forward in his distributing and efficiency after starting 21 games a year ago, as there’s not a clear second option at point. The frontcourt is super-athletic, led by 6-8 Walter Foster, 6-5 Mike Morsell and 6-5 Davis, and there are very high expectations for Moto, who got all-conference honorable mention in the preseason before even playing a game in the league.

Outlook: Despite having a roster with many of the same players who went 9-23 in 2013-14, Keatts--a former Louisville associate head coach--certainly made an impact in his first season, doubling the win total from the year before. Now he has to deal with a much less experienced roster after the graduations of his top two scorers in Spruill and Jackson plus a solid big man in Williams. To help offset the losses, Keatts adds a pair of transfers from UNC-Charlotte, Ingram and Bryan. Ingram, a 6-0 redshirt junior guard, started 10 games as a sophomore at Charlotte, averaging 8.1 ppg, while Bryan, a 6-7 redshirt sophomore forward, averaged 3.5 ppg and 2.4 rpg in 31 games as a freshman.

Outlook: The Phoenix, who were often contenders when they competed in the Southern conference, finished in the middle of the pack upon joining the substantially more competitive CAA in 2014-15. Now with six different freshmen jumping into the mix, coach Matt Matheny will have his work cut out for him entering the upcoming season, and will need seniors like Tanner Samson and Tony Sabato to step up into leadership roles in their final season. Samson, a 6-4 guard, has held a significant role since his freshman year, averaging in the high twenties each of his first three years in minutes per game. Alongside Samson, junior Luke Eddy and incoming freshman Steven Santa Anna should have the Elon backcourt playing like one of the Colonial’s more talented.

Outlook: Charleston struggled in its second season in the CAA and first under Earl Grant; however, the Cougars were able to reach the quarterfinals of the CAA tournament by defeating an injury-riddled Drexel team in the first round. Grant welcomes back his scorer from last season in 6-foot-6 wing Canyon Barry, but his second-leading scorer, 6-3 Joe Chealey, is out for the season. Sophomores Cameron Johnson (guard) and Donovan Gilmore (forward) are expected to contribute much more than they did as freshmen. This could be another tough year for the Cougars.